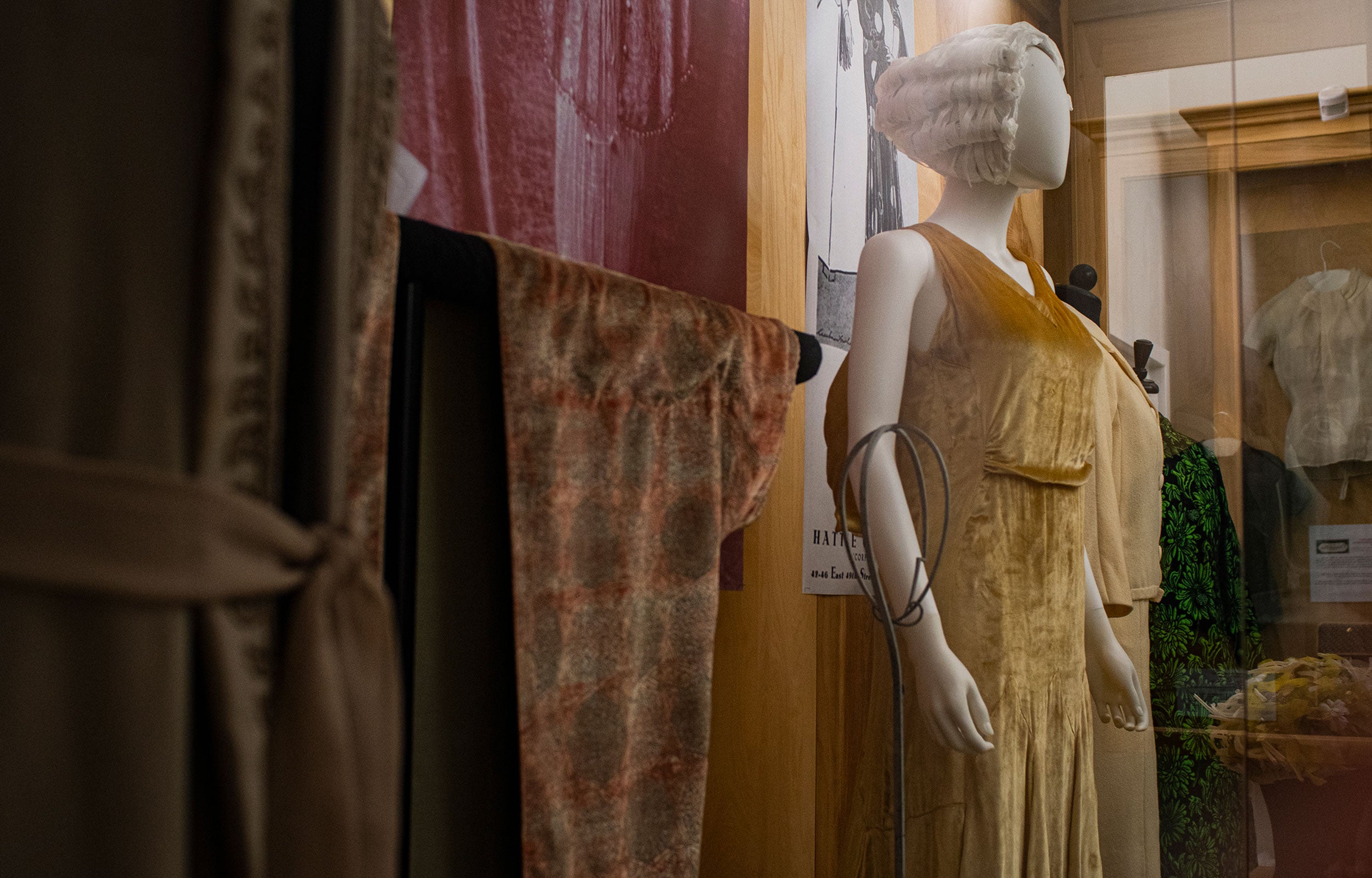 The Hattie Carnegie velvet dress from the 1920s, above, is featured in the Textile, Fashion Merchandising and Design’s ‘What’s in a (Designer’s) Name?’ exhibit in Quinn Hall Textile Gallery.
Photo credit: Nora Lewis

Shoppers in the 1850s reacted to new designer labels much like shoppers today do as they browse the racks at TJ Maxx or a high-end boutique.

“It’s the same reason we look for labels in our garments today,” said Susan Jerome, manager of URI’s Historic Textile and Costume Collection. “You want to tell people you’re a certain kind of person.”

The history of designer-labeled fashion is explored in a new exhibit in the Quinn Hall Textile Gallery that asks “What’s in a [Designer’s] Name? An Investigation of Twentieth-Century Fashion Labels.”

Examining the work of 20th century designers in URI’s vast textiles collection, the exhibit provides a history of haute couture over the past century, focusing on the birth of the eponymous label and the transition from individual designers and fashion houses to the brands that still thrive today.

Walking through the exhibit has the feel of window shopping past posh boutiques. The exhibit, which was researched, curated, and installed by graduate students in URI’s Textiles, Fashion Merchandising and Design program, features about 30 garments by such noted designers as Mariano Fortuny, Christian Dior, Hubert de Givenchy, Yves Saint Laurent, Guy Laroche, Perry Ellis, Issey Miyake and Frankie Welch.

URI’s undergraduate and graduate programs prepare you for wide range of industry careers, offering courses that deal with textiles and fashion from the perspectives of business, art and design, science, sociology/anthropology, and history.

Explores the history of branding

English fashion designer Charles Frederick Worth (1825-1895), whose picture greets visitors to the exhibit, is credited with being one of the first French couturiers in the mid-1800s to include branded labels in women’s garments. While designers and fashion houses morphed into brands during the 20th century, many designer labels have remained a status symbol, even if their guarantee of high-quality work is sporadic today, Jerome said.

“Many of the designers in this exhibit worked to make high-end products,” said Paige Bailey, a second-year master’s student in historic textile conservation. “Their labels guarantee the high quality of the object a consumer is buying as well as a way for consumers to flaunt their genuine purchase.”

While exhibits of designer fashion are not uncommon, said Alyssa Opishinski, the Quinn Hall exhibit specifically explores the history of branding, providing the show a wider appeal. Students in URI’s College of Business, which houses the textiles program, should find the themes interesting, she said, particularly how long the concepts of branding and licensing has been around and how many originated in the fashion industry.

“I also hope students who are studying business or fashion design can find inspiration,” she said. “For example, the Perry Ellis pieces showcase his innovations in attempting more sustainable fashion and Frankie Welch is an amazing example of women’s entrepreneurship during the second wave of feminism.”

Bailey and Opishinski were among 10 graduate students who researched, curated and staged the exhibit.

From haute couture to ready-to-wear

Jerome and Professor Linda Welters reviewed URI’s Historic Textile and Costume Collection of more than 25,000 items and pulled out designer-labeled objects, and students in Welters’ graduate-level course in 20th century designers conducted extensive research on the objects. The students’ garment analyses included researching the designers, the donors, the materials used in the garments and the quality of design and construction.

“This was particularly important for me because writing reports on garments is something I am going to be doing in my desired career,” said Bailey. “Without this research, we might not have found out the story behind certain garments and designer labels.”

In instructor Rebecca Kelly’s graduate course on exhibition and storage of historic textiles, the students selected the garments for the show from the detailed research, and conducted the hands-on work of mounting and displaying the garments, and writing text for the displays. In curating the show, students considered each garment’s historic relevance and beauty, while making sure to include clothing from across the century.

“What was harder than whittling down our final list was deciding the order in which the objects would be shown,” said Opishinski. “We ended up with a chronological order. I wish we had been able to show more of our designer accessories, but just preparing the mannequins and mounts took a huge amount of time and resources.”

The stories behind the fashions

Among Opishinksi’s favorites in the show is a cream-colored women’s dress suit by Guy Laroche from the late 1950s-early 1960s, which was donated to the URI collection by a former dean of home economics, Beverly Cusack. “Its history shows how haute couture designers had to shift to incorporate ready-to-wear to stay relevant,” she said.

Bailey picks a sequined sheath dress by Tom and Linda Platt from 1989 and a purple peasant coat by Yves Saint Laurent from 1977, part of the designer’s successful Russian Collection.

“This was also the advent of his ready-to-wear career, so you can thank the coat for being the kick-starter for some of the YSL products you can find in stores today,” said Bailey. “The Platt gown has a very sweet story behind it, where the designers fell in love while studying at the same school and have been creating fashion together ever since. It’s stories like this that add depth and richness to a designer’s career, and in turn, their label.”

Jerome’s favorites are a buttery yellow Hattie Carnegie dress made of silk velvet from the late 1920s, and two 1950s Christian Dior silk organza blouses, one off-white and the other navy. Jerome appreciates them with a sewer’s eye.

The exhibit runs through December in the Quinn Hall Textile Gallery, located on the first floor of Quinn Hall, 55 Lower College Road, Kingston. The gallery is open Monday through Friday 8:30 a.m. to 4 p.m. Admission is free.