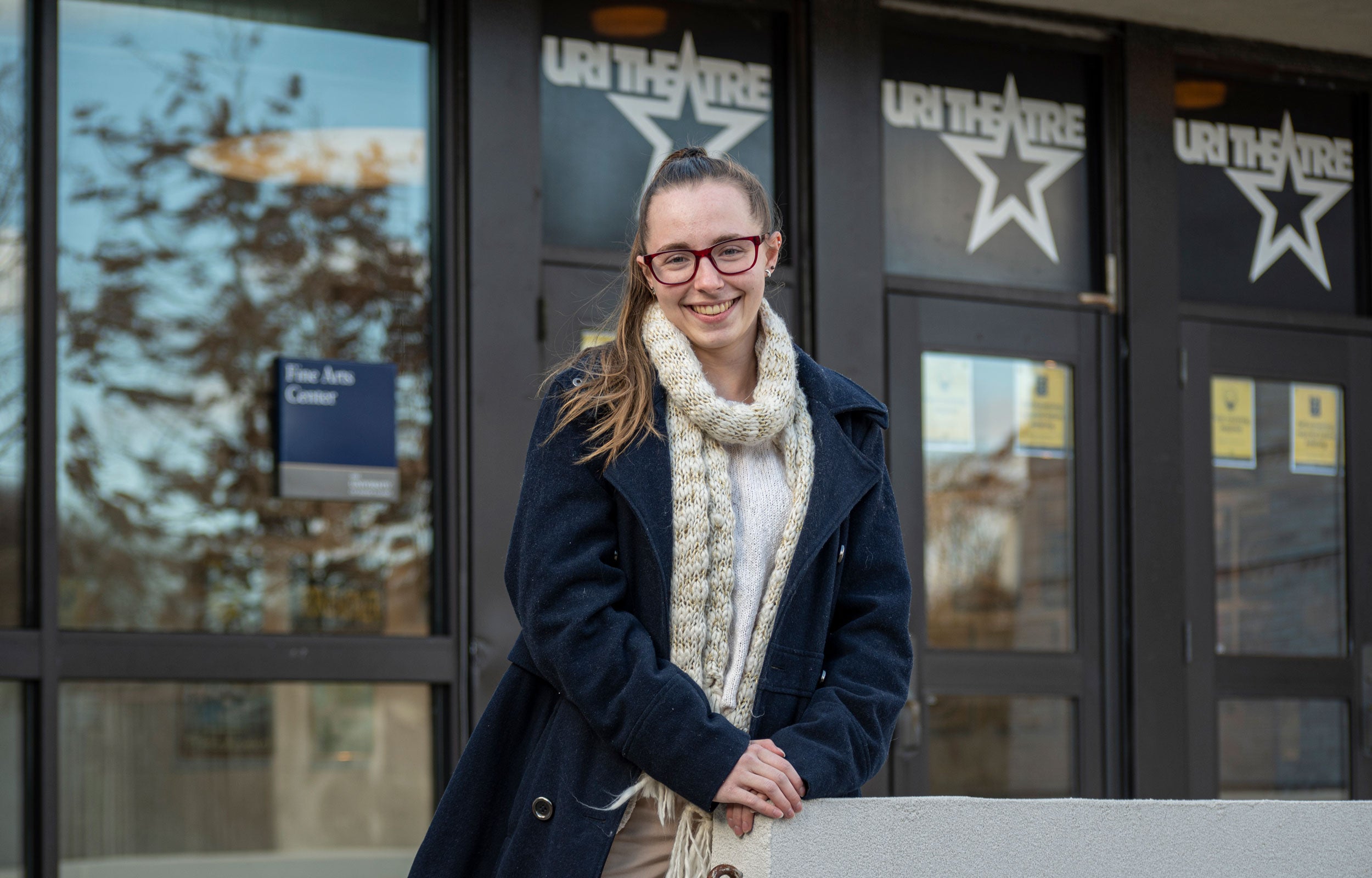 As a first-year student, Audrey Visscher ’22 knew she wanted to try on as many hats in theatre as possible.

Now a senior theatre and film media major, Visscher has done exactly that. She has worked as crew, costume crew, painter, light board and sound board operator, sound designer, house manager, assistant director, and director—to name a few. “I really like being a part of every show we put on here at URI,” said Visscher. “I’m working to have as many different roles on productions as I can before I graduate.” 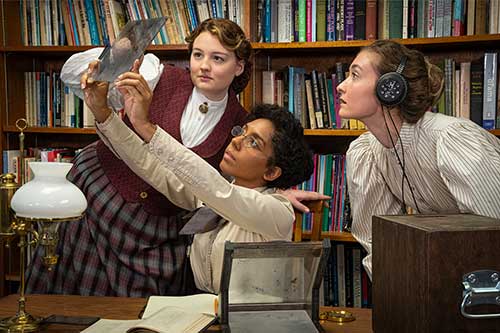 Theatre is a collaborative art, and your role is valued, whether you are acting, writing, directing, designing the set, or sewing the costumes. This respect for the work that everyone does—both on stage and off—defines the URI theatre department’s approach.

The role of lighting design is in a way simple—illuminate the actors, convey the mood, set the time and place of the scene. But the job is far more demanding, Visscher says, requiring numerous readings of the script, breaking down and understanding the lighting needs of each scene, creating keys for the color and direction of the lights, creating a draft of where the lights will hang, and ensuring that the design works.

As a design and directing student in theatre, Visscher knew she wanted to add lighting to her jack-of-all-trades approach. “I had never light designed and it seemed extremely daunting, but I was also excited they were offering me this position,” she said.

Visscher had taken a lighting design class with Assistant Professor James Horban, and he served as her mentor in her first foray into lighting design. “I was impressed by Audrey’s ability and determination to stay focused throughout the entire process,” said Horban. “Creating a lighting design takes a lot of mental stamina, as one must quickly switch between an artistic eye and technical prowess, and Audrey was able to rise to that challenge.”

‘I had to break everything’

“Silent Sky” is a true story about women astronomers who made breakthroughs charting the stars. One of Visscher’s proudest moments came when the story’s lead character, Henrietta Leavitt, and her love interest, Peter, begin to envision a future together. In a dream sequence, they are sailing on an ocean liner under the stars. But the daydream is broken when Henrietta’s sister bursts in to tell her their father has had a stroke.

Unlike most conservatory programs, URI encourages and even requires students to experience something outside of their chosen concentration in order to fully understand and appreciate theatre. It’s such a great push to find a niche you never would have considered. 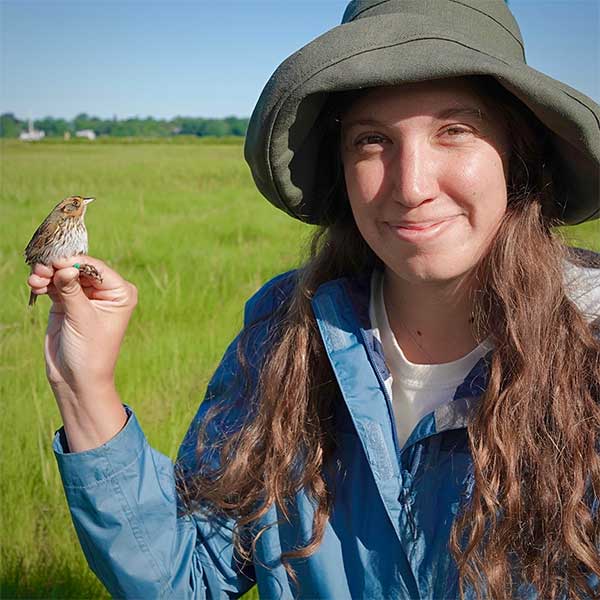 Undergraduate Research and Innovation at URI, or (URI)2, is for undergraduates in all disciplines and at all levels who think big in a self-directed, hands-on way. At URI, we value innovation in traditional STEM, and in art, music, theater, film and more. (URI)2 accepts undergraduate research grant applications two times per year, in March and October.

‘I didn’t expect an award’

Visscher’s “Silent Sky” lighting design provided the basis of a poster that took top honors among presenters in the social sciences, arts and humanities category in the 2021 Showcase of Undergraduate Research, Scholarly, and Creative Work.

“I had a blast. I only wish the Showcase was longer because I had so much to say,” said Visscher, whose presentation included a table of sample lights and her lighting design draft to explain the process of lighting design. “I went into the showcase just excited to talk about lights. I didn’t expect an award.”

‘Out of your comfort zone’

“Silent Sky” also gave Visscher the opportunity to work a full-length show from start to finish as assistant director. In December, she assisted with props on the production of “Clue: On Stage.” And this spring, she’ll serve as assistant stage manager for “The Wizard of Oz.”

Her numerous backstage roles have fed her different interests and introduced her to new ones. When she started at URI, Visscher was mainly interested in scenic design. Now she’s experienced many other design opportunities, which have also given her the knowledge to help her effectively communicate with designers as a director.

Looking beyond graduation, Visscher sees career options as plentiful as the jobs on her check list.

“Between designing and directing, theatre and film, I am sure I will be jumping all over the place, keeping it fresh every time I accept a new role,” she said. “URI Theatre offers so many opportunities and forces you out of your comfort zone. Unlike most conservatory programs, URI encourages and even requires students to experience something outside of their chosen concentration in order to fully understand and appreciate theatre. It’s such a great push to find a niche you never would have considered.