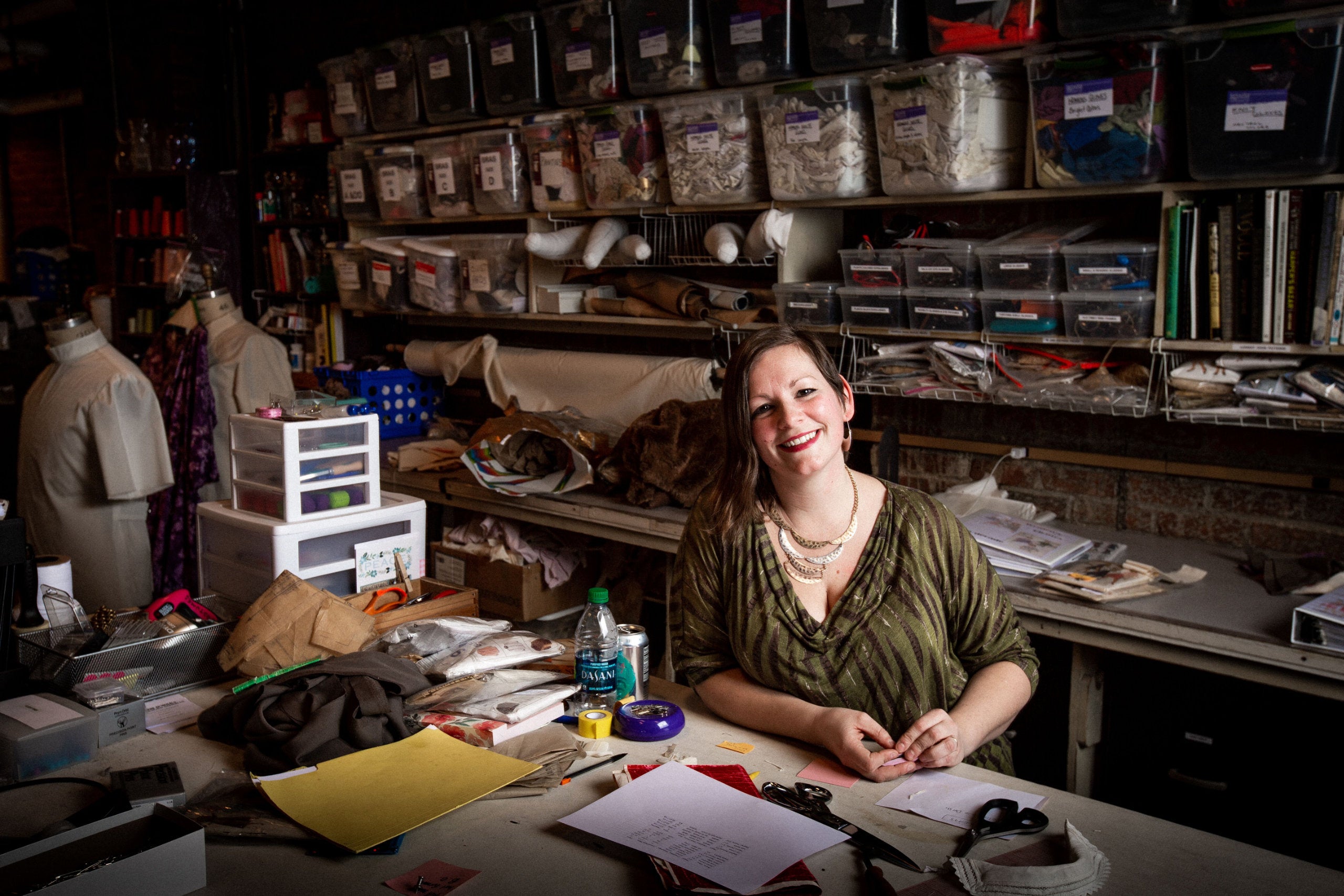 Behind the Scenes with Amanda Downing Carney

To hear Amanda Downing Carney ’03 describe her work as director of the costume shop at Trinity Repertory Company calls to mind the creativity required of Cinderella’s Fairy Godmother in outfitting her ward for the prince’s ball.

For Trinity’s production of Black Odyssey, for instance, a quilt skirt was required. This is not something solved by a trip to Nordstrom. So Carney sourced a vintage quilt on Etsy, studied Underground Railroad patterns — market baskets, railroads, crossroads, log cabins — and created replicas. The same attention to detail was required in the selection of military costumes, historical and modern, that the character Ulysses wore. The Sirens’ costumes posed still another challenge — the designer envisioned them as larger-than-life, a look that called for heads atop the actors’ heads and wild wigs topping all. 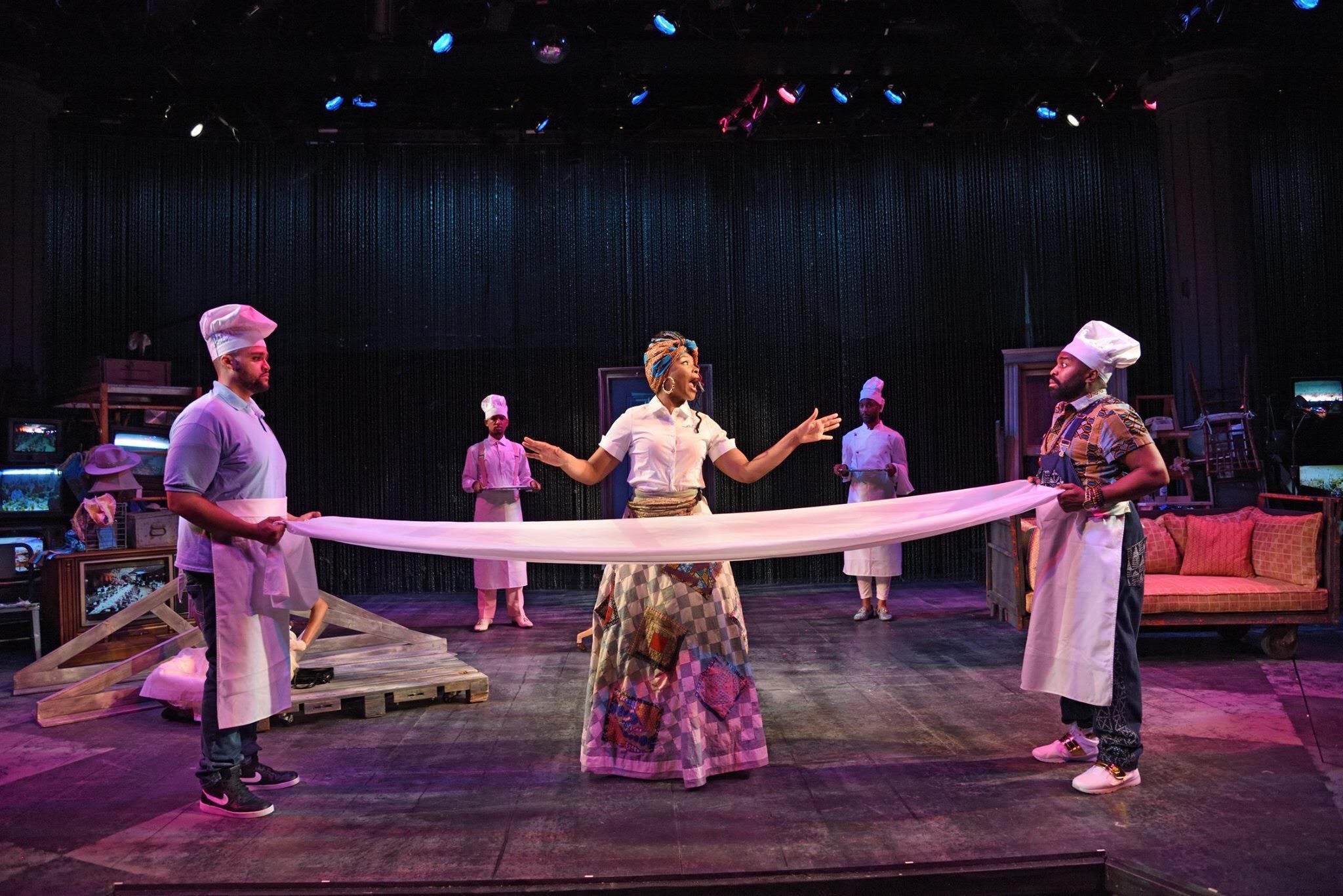 William Shakespeare’s Macbeth followed Black Odyssey. Carney holds a metallic, cardboard horse-head mask mold in her hands. It was used to create three custom-made horse heads worn in the production. The director wanted horseheads for the actors in the scene where Macbeth kills Duncan. “He wanted a visual metaphor,” Carney recalls. And that metaphor had to be lightweight, figurative yet abstract, and easily removable while also allowing its wearer to see, hear and, of course, act. And it had to be ready for dress rehearsals in three weeks. 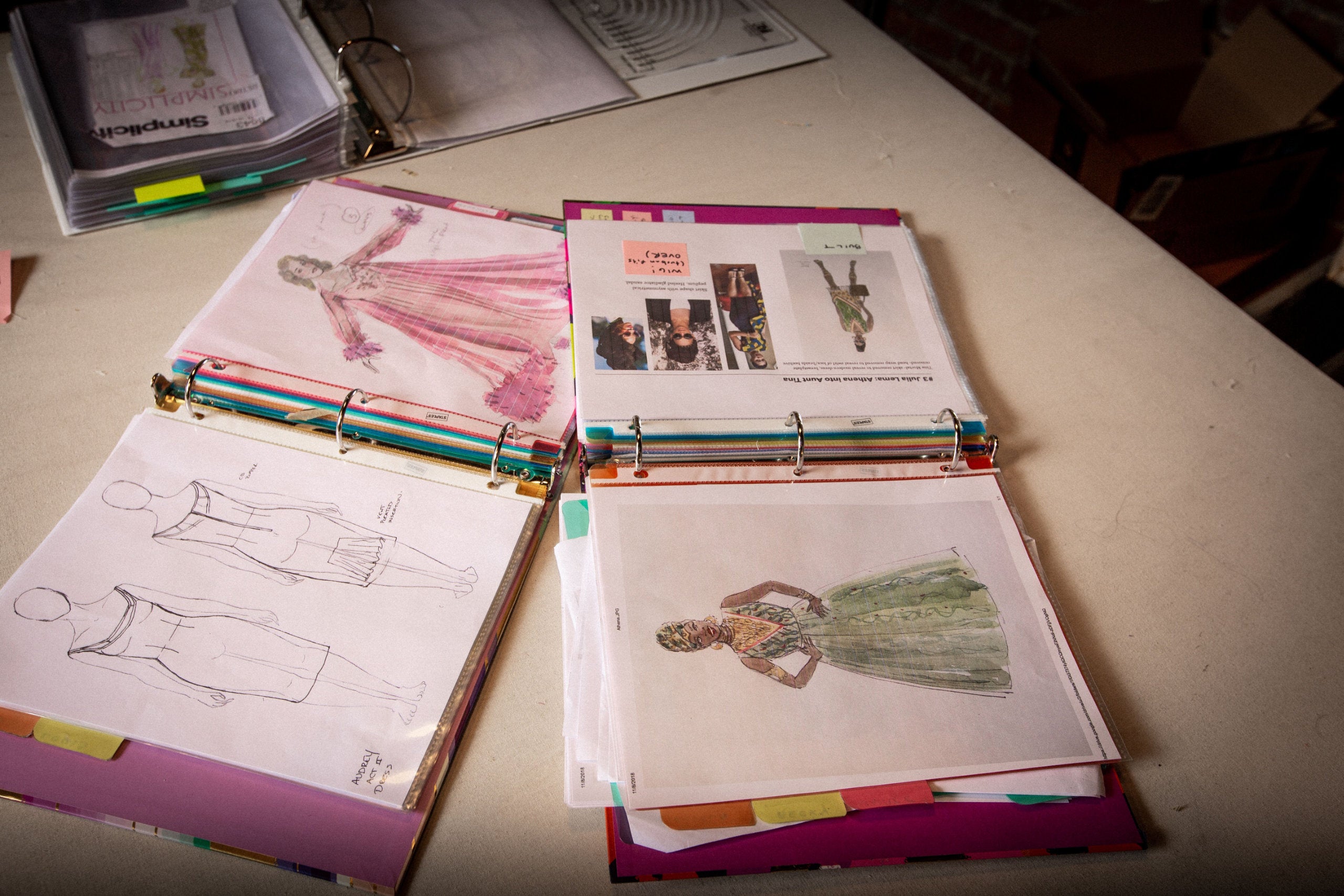 After an exhaustive search that resulted in several purchases made and discarded, as well as failed craft attempts involving chicken wire, clay, and boning, Carney’s team found their solution: an origami-esque horse-head mold for heads made out of a thermoplastic called worbia — the same material used to create the Sirens’ masks. “We’re small but mighty,” Carney says. 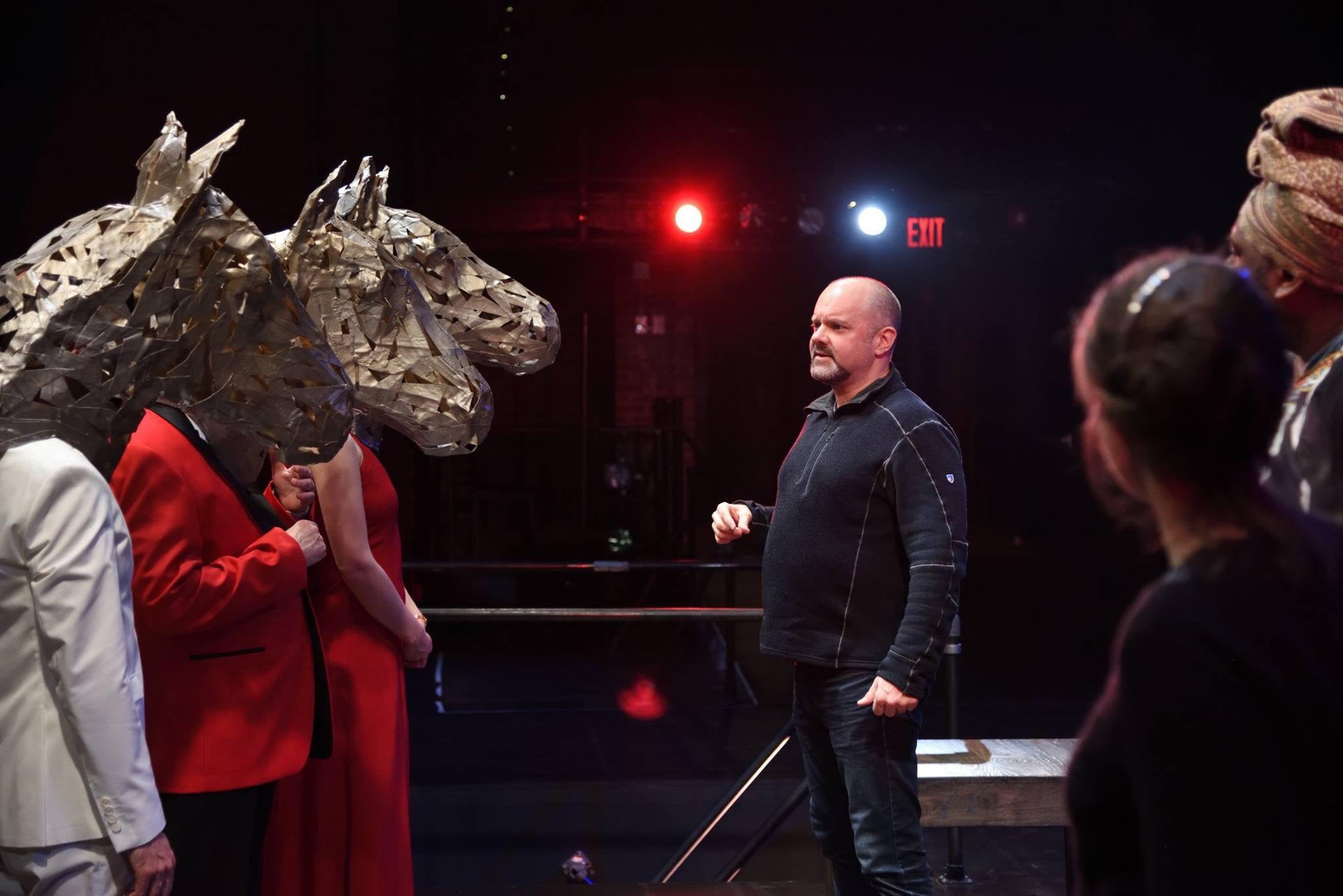 It’s a favorite line of Carney’s mentor, David T. Howard, chairman of URI’s Theatre Department and professor of costume design. Carney, who has been at Trinity Rep (with breaks for babies) since 2006, recalls the moment she knew she’d found her niche. “It was David Howard’s costume history class, and I thought, wow, this is a job! Then I ran my first show, and it was insane, and I loved it, and it consumed my life.” 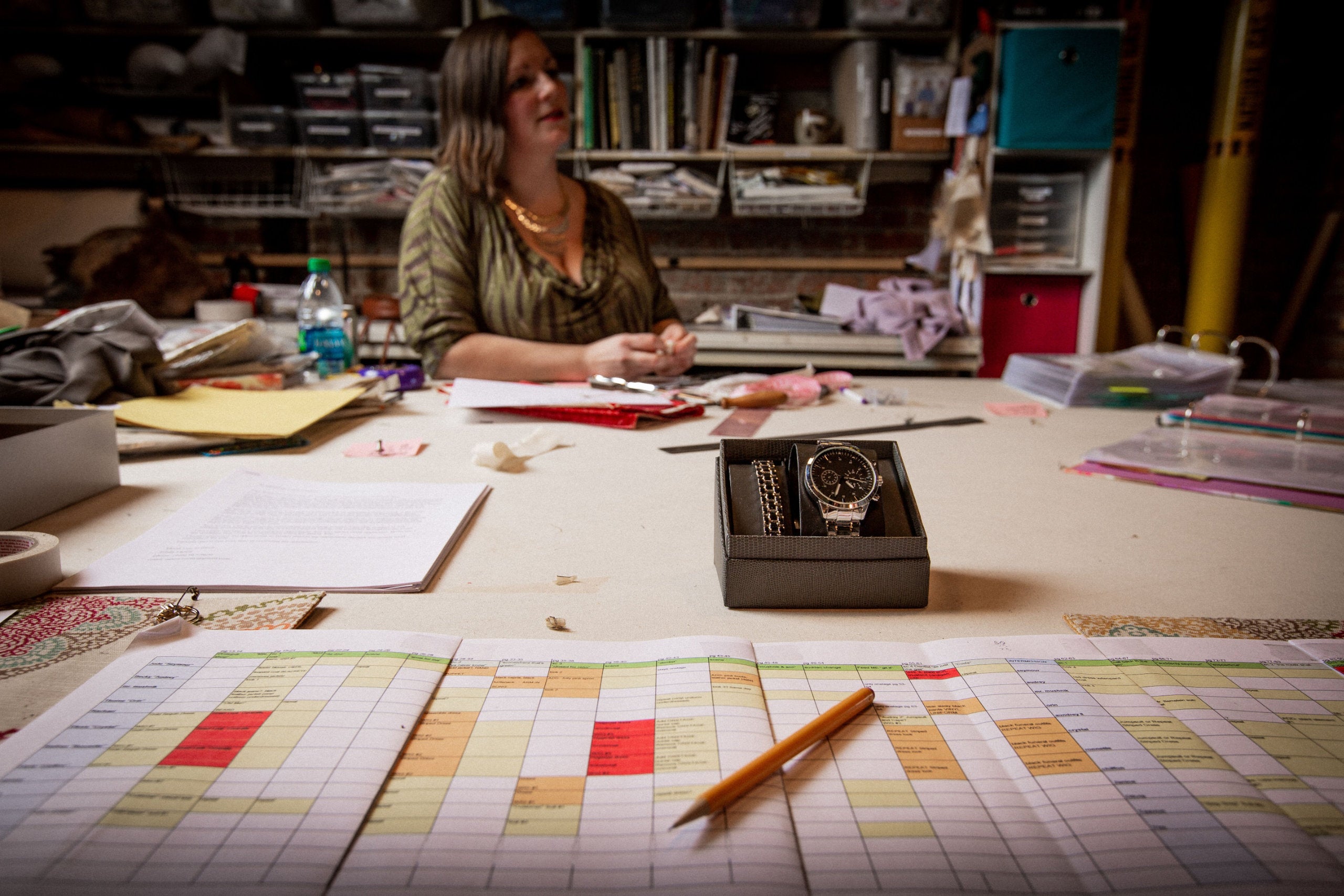 The Costume Shop at Trinity Rep.

Sixteen years into her career Carney says she’s found her dream job and credits URI with developing both her practical skills and her big-picture thinking. “Each production is challenging in its way. It’s a lot of in-the-moment quick decisions and sometimes making miracles happen,” she says. “At URI, I learned this work is essentially constant problem-solving — which is why it’s hard and why it’s so much fun.”