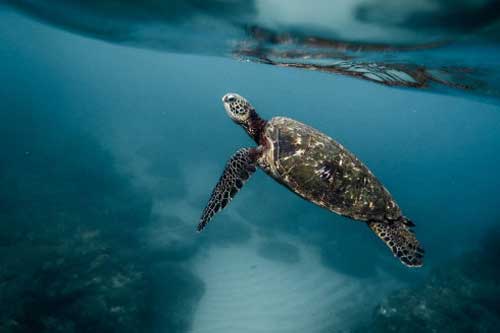 The B.S. in Marine Biology curriculum is designed for students who plan to work in marine biology, marine ecology, biological oceanography, marine conservation, marine education, or related fields. In the program, we encourage an interdisciplinary approach that could include study in areas such as aquaculture and fisheries, marine affairs, marine environmental economics, marine archaeology, and ocean engineering, among others.

His brother studied computer engineering and Hooks thought he would follow suit, studying that and German through URI’s International Engineering Program.

But Hooks felt a pull in a different direction. As a child, he was more at home outdoors than in. He’d been a camp counselor at Alton Jones, one of URI’s campuses, and was drawn to the idea of a career that would allow him to work with animals.

“I did some soul searching and, you know, I spent so much time near the water, the ocean,” he said. “I had a stream in my backyard, and I would go there and talk to the frogs.”

“They were probably terrified of me.” He laughed.

“I would go to zoos or aquariums and see animals living in uncomfortable conditions and think, I need to help. I wanted to care for marine mammals and fish or invertebrates,” Hooks said.

Hooks found a home as a marine biology major in the College of the Environment and Life Sciences, studying a shell disease in lobsters that affects half the local population. It’s essential work. Human beings’ health and welfare depend on the stability of ocean life.

Hooks also works at URI’s Narragansett Bay Campus at the Inner Space Center, a one-of-a-kind national facility that supports live ocean exploration via telepresence technology. “I love it,” Hooks said. “I never get bored on the underwater dives they do.”

After graduating in December, Hooks will begin a master’s degree in oceanography at URI’s Graduate School of Oceanography. “Being able to do independent research has been a great thing. I was recently a project leader with friends doing lobster research. I thought, what can I do with something bigger?” Hooks said.

He expects URI will have the answer.

To students who have similar interests, Hooks’ advice is to take risks and to ask for what you want. “It’s the reason I’ve gotten most of my connections,” he said. “That’s the reward.”