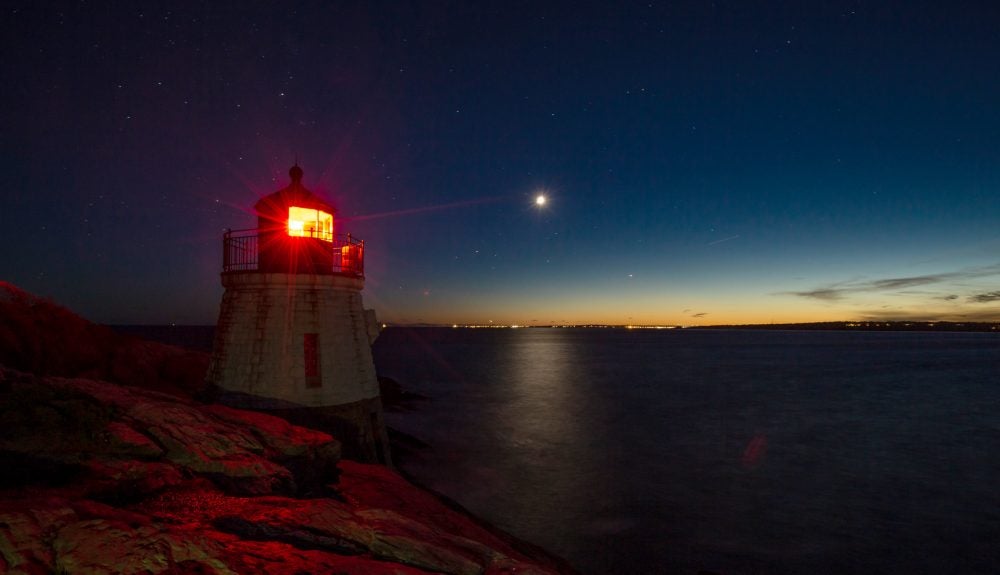 Castle Hill Light at the mouth of Narragansett Bay

Rhode Island’s Narragansett Bay is more than a body of water.

It’s a cultural touchstone for the state’s residents. A recreational and economic asset. A rich source of food. A tourism gem. A thing of beauty.

And for URI students, educators and researchers, the Bay has long served as a real-world classroom and an endless resource for teaching, study, outreach and discovery.

Now, oceanographers, engineers and other marine scientists from URI, in partnership with researchers from seven other institutions in the state, are preparing to deploy an array of instruments in Narragansett Bay as part of a new effort to monitor and predict the Bay’s health in the face of environmental changes. They will use state-of-the-art sensors and sampling technologies to delve into the Bay’s waters, and in real time, quantify chemical compounds and marine organisms, which can affect plants and animals in good or bad ways.

The Narragansett Bay Observatory is part of a project funded by the National Science Foundation’s Established Program to Stimulate Competitive Research and the Rhode Island Science and Technology Advisory Council. The grants also fund related research by dozens of graduate students as well as internships for undergraduates. More than a dozen scientists from the URI Narragansett Bay Campus are involved.

“The health of Narragansett Bay needs to be better understood in the face of both natural and human stressors,” says Lewis Rothstein, an oceanography professor at URI’s Graduate School of Oceanography and one of the project leaders. “The observatory will help obtain the information we need to understand and predict the health of the Bay, which is so essential to the well-being of Rhode Island.”

Three oceanographic instruments will be deployed in November in three locations, spanning the upper reaches of the Bay to the waters off Newport.

The instruments will collect data on nutrients that plankton and other organisms use, such as nitrogen and phosphates, will grab water samples to examine complex interactions among nutrients and marine species, and will measure temperature, salinity and currents.  Data will be used to predict the effects of global warming and related issues, as well as to study human impacts on coastal ecosystems.

The Rhode Island Data Discovery Center, an online portal, will house the information, enabling access by researchers and the public.