Skip to content
COVID-19 updates, #rhodytogether
About the Blue Minds seriesAuthor and scientist Wallace J. Nichols argues that those who experience “blue mind” — an at-homeness in the ocean — should share their experiences for the good of humankind and the planet. At URI, we get blue mind. The ocean is our workplace, our playground, and our sacred space. Our love of the sea is a net gain for science, engineering, literature, art, and the environment. Maybe even humanity itself.

Change starts with having a personal environmental ethic, and that ethic is to do no harm. Take care of what you have. 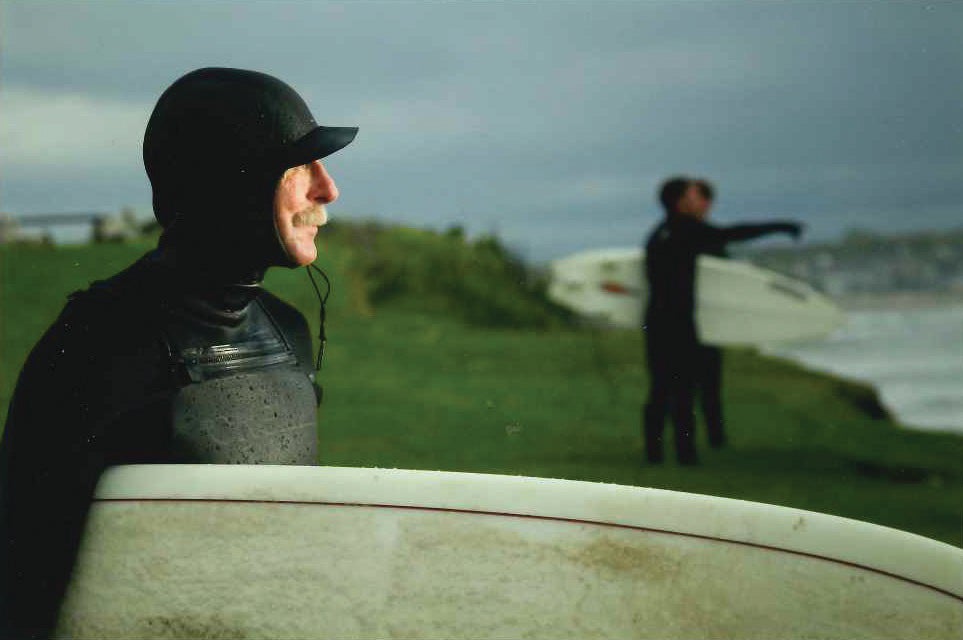 Richard C. “Rick” Rhodes III figures he’s been surfing for 50 years, three to four days a week. “As frequently as there are waves,” he says.

The former associate dean, Research, of URI’s College of the Environment and Life Sciences, Rhodes is now executive director of the Northeastern Regional Association of State Agricultural Experiment Station Directors. Talking to him, you get the impression that to surf Rhode Island waters you have to be the gritty, hardscrabble type, stoked as much by a winter storm’s swells in the 40-degree range as you would by high summer’s sun and 70-degree surf.

How much does Rhodes love the ocean? Sit a spell. And fair warning: Surfing stories are like fish stories. With each telling they grow more epic.

Rhodes had just returned from a work trip to Morocco, where he’d surfed intense waves. “I returned to winter in Rhode Island and these puny, little waves about head-high in Matunuck,” Rhodes recalls. “A wave caught me right in the back and I started falling down. The wind caught my board and it hit my head.”

Rhodes blacked out. When he came to, he saw a trail of black in the water. Blood. Other surfers were yelling, asking if he was OK. Rhodes assured them he was fine and began paddling in. When he got into the car and caught a look at himself in the mirror, he was stunned. “I looked like I’d been in an axe fight.”

Rhodes called his wife, telling her he was headed to the hospital. He’d likely need a stitch or two—or so he thought. “In the ER, two nurses and the PA on duty were surfers. They said, ‘Wow, that’s so gnarly. How’d you do that?’”

He laughs, still amused that they were impressed. Rhodes’ injury was significant: a gash that ran from the bridge of his nose to the middle of his forehead, arching over his left eyebrow. It required seven stitches.

“But when I tell the story, seven stitches grows to 70,” Rhodes quips. “The worst day of surfing is better than the best of a whole lot of other things. Even if you get skunked, you’re still in the water.”

While he is quick to point out that he came to URI for his career—“The really strong attraction was the job”—Rhodes considers the Atlantic to be quite the job perk.

“What I enjoy is being able to tap that source and utilize the power of the ocean for pure, unadulterated fun. It’s unlike anything else. That thing that you’re riding is moving, and you’re moving in a different dimension, and that is the coolest feeling in the world,” Rhodes says. “The power of the ocean just surges under your feet.”

‘We all have a stake’

The up-close-and-personal relationship Rhodes has with the ocean has made him an advocate of scientific literacy; essentially he wants people to understand scientific concepts and processes so they can make informed and ethical decisions in their personal and professional lives, as well as at the polls. In his current job, Rhodes examines the way we raise food—and how much food we raise. Climate change, saltwater inundation in soil, nutrient-deficient land: These are just some of the issues we face in the near future, he says. And then there’s pollution. Every year, approximately 9 million tons of plastic waste enter the ocean, according to a May 2019 National Geographic article, “Little Pieces, Big Problems.”

How to change things?

“Change starts with having a personal environmental ethic, and that ethic is to do no harm. Take care of what you have,” Rhodes says. “We were taught as graduate students to be unimpassioned observers of science. But your job—as a scientist, as an educator—is to provide a context for data. You are also responsible for providing environmental literacy.

“We are all caretakers in this, and we all have a stake in this.”