URI celebrates the inauguration of Marc Parlange as 12th president 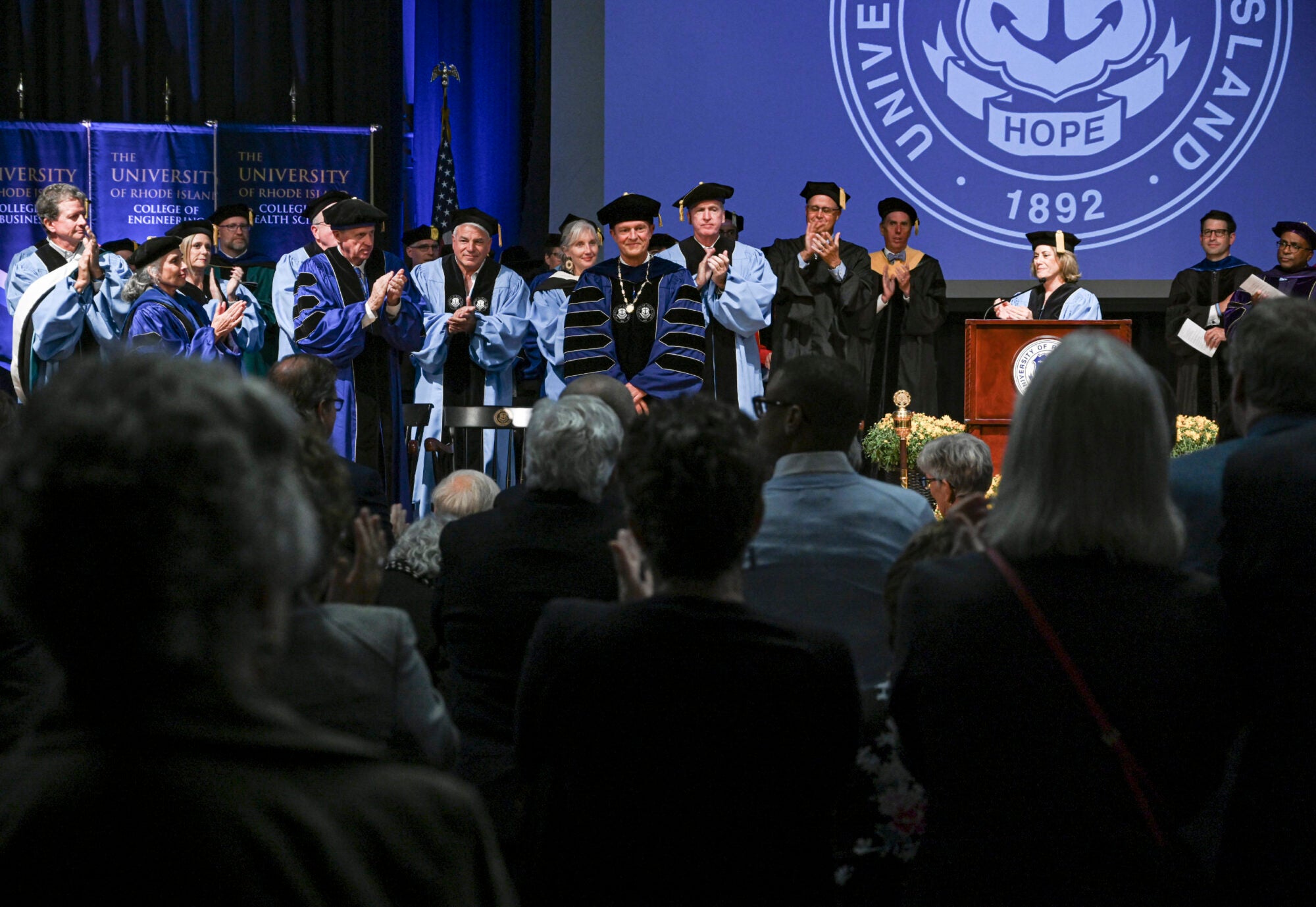 University of Rhode Island President Marc B. Parlange used the teamwork of rugby to illustrate how a great university should operate in the 21st century during his inauguration address on Thursday.

“To get down the field and across the line the team moves together as a unit. … Any player can pass, any player can score, but not a single player will accomplish that without the support and momentum of the rest of the team,” Parlange said during his remarks at Edwards Hall on the University’s Kingston Campus.

“Obviously a university is not a rugby match, but I am certain that this concept—
that we operate best as a team, combining our individual strengths and being open to change as challenges and opportunities arise—can serve as a powerful model for achieving our goals. We are building a university for the future, our collective future,” he said.

In his first year at URI, Parlange, who began his role as president in August 2021, has impressed students, faculty, state and business leaders, and alumni with his accessibility, care for the community, and innovative approach to leadership. 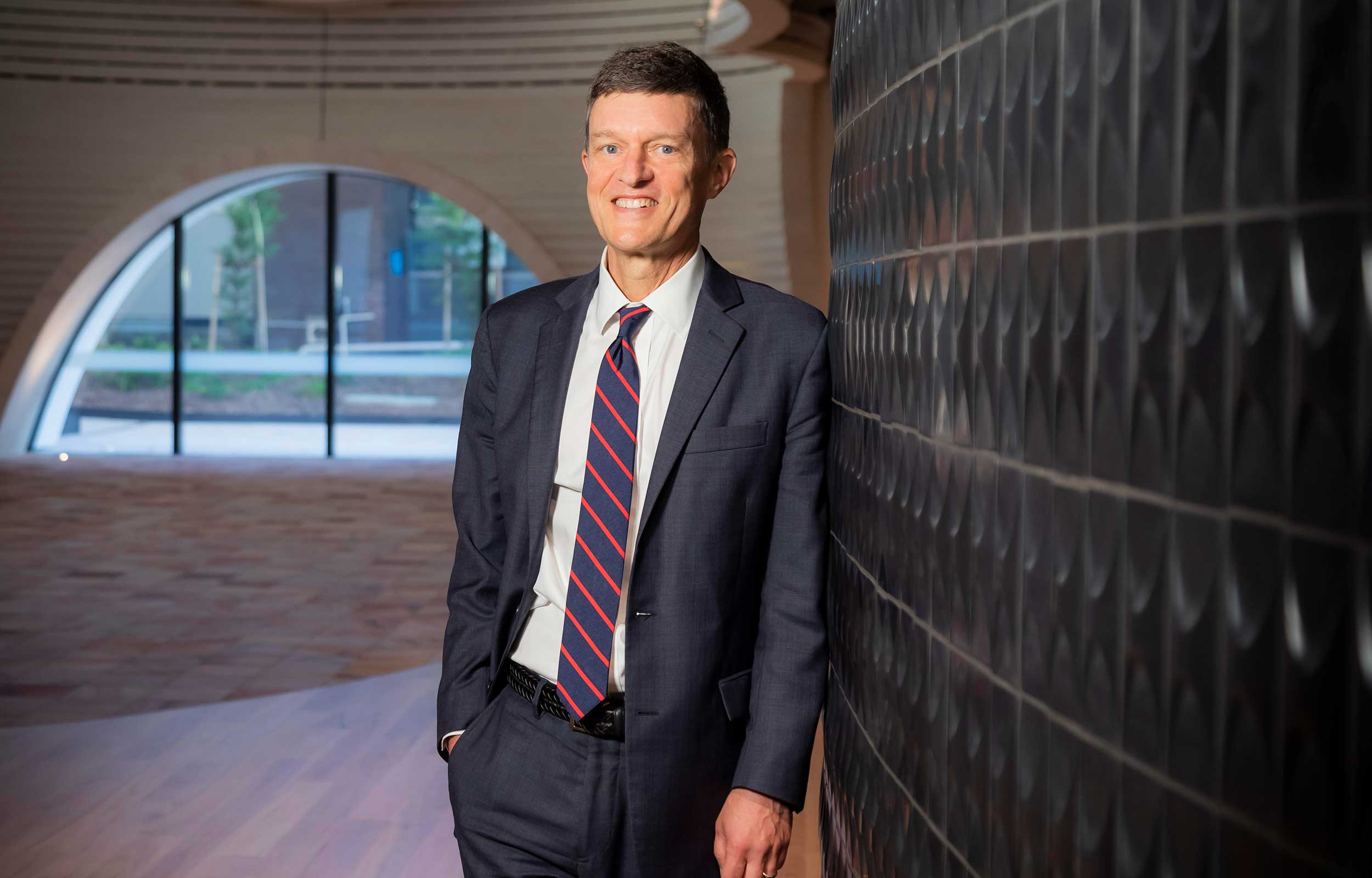 Marc Parlange is a big thinker with a global view, a scientist and scholar, and a distinguished leader with a firm belief in the power of collaboration.

In his first year at URI, Parlange, who began his role as president in August 2021, has impressed students, faculty, state and business leaders, and alumni with his accessibility, care for the community, and innovative approach to leadership.

Parlange, the former provost at Monash University, Australia’s largest research university, is positioning the University and the state of Rhode Island as global leaders in the Blue Economy and establishing URI as a major hub of Blue Economy activity, contributing significantly to the social and economic ecosystems of the state.

Since he arrived in Kingston, Parlange has developed 20 new Ph.D. fellowships to attract the best and brightest students to work with the University’s faculty on research and scholarship, and he presided over the opening of the Talent Development Achievement House. He has championed a “one university” approach, bringing people together across disciplines to better tackle pressing problems and more broadly serve local and global communities. 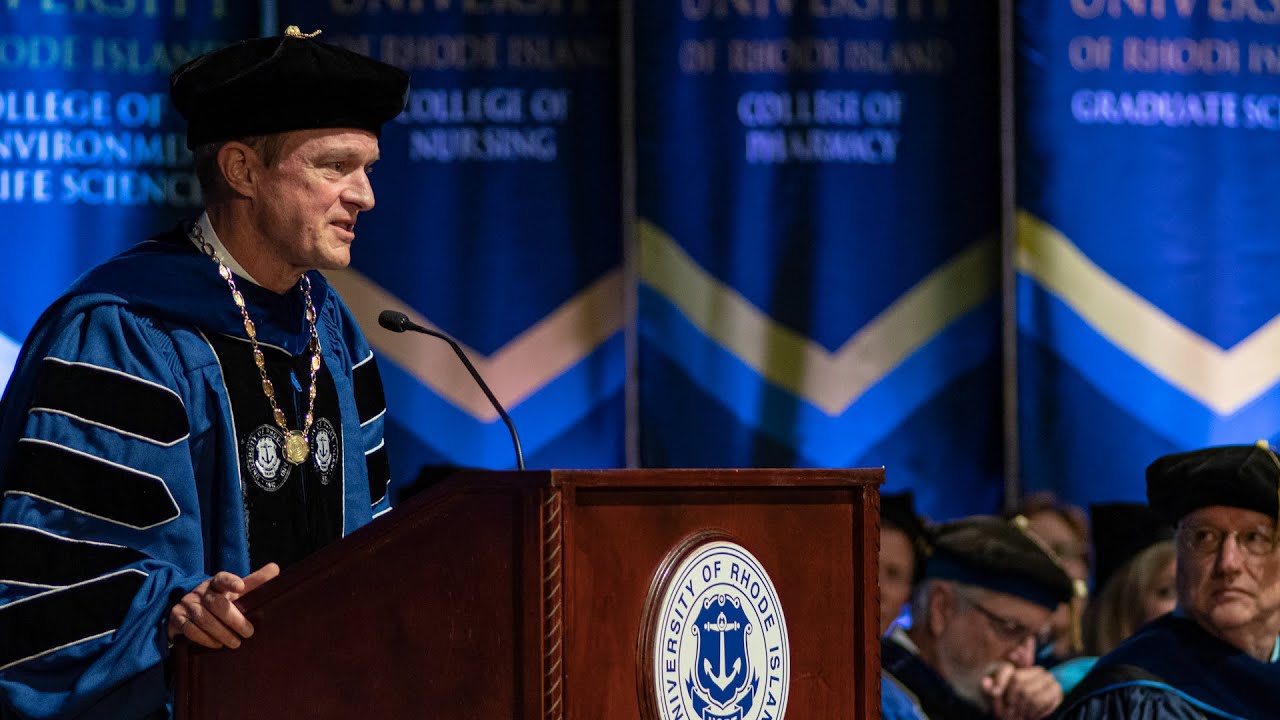 A message of partnership from the governor

Rhode Island Gov. Daniel J. McKee, who participated in the ceremony, celebrated Parlange’s first year as president and URI’s deep commitment to the state. “We want to make sure that each and every one of us carries the passion that you have for excellence. Rhode Island is much better off for having you here,” McKee said.

“You have already made strides that are extraordinary. URI is going to play a major role in keeping the momentum going in the state of Rhode Island and in its economy,” the governor said. “URI has always done great things, and is now starting to do even greater things under your leadership.”

Thursday’s ceremony was both a celebration of tradition and a look to the future. The Yootay Singers, featuring members of the Narragansett Indian Tribe, opened the ceremony and URI graduate Rachel (Afua) Ansong recited an inaugural poem, “Akwaaba, Welcome Dear Guest,” which she composed for the occasion.

In opening remarks, Margo Cook, chair of the University of Rhode Island Board of Trustees, said, “Marc has energized our University through his instant connection with students, faculty and staff, and his vision and drive to instill a commitment to service, excellence and equity across the University.” Cook continued, “With a ready smile, he is approachable and accessible. But make no mistake, URI’s president is decisive and keenly focused on making URI a global leader.” 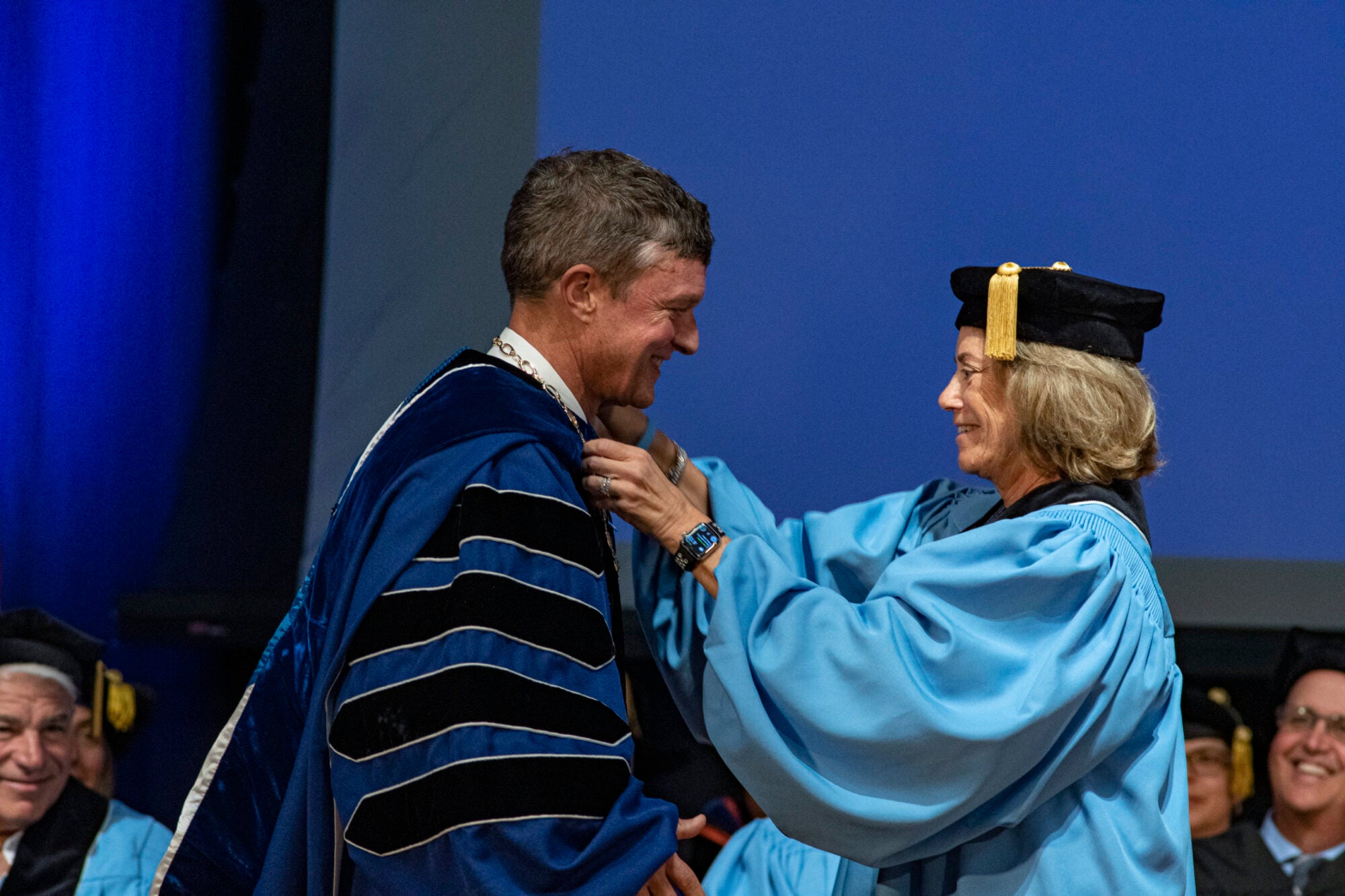 Chair of the Board of Trustees Margo Cook presents President Marc B. Parlange with the URI Presidential Medallion

As part of the formal ceremony, Cook presented the official URI Presidential Medallion to Parlange. He is the third president to wear the medallion, which was created by URI alumnus Robert C. Corio.

Corio and his company, Robert Corio Designs, donated the piece as part of the University’s centennial celebration in 1992. The medallion, hand carved in wax and cast in 6 ounces of 18-karat yellow gold, features the official University seal. The oval links on the medallion’s chain are engraved with the names of URI’s 12 presidents.

A university for the future

Looking out at the enthusiastic crowd, Parlange said many hands and minds have shaped URI’s campuses and its culture.

“This land, and its abundant waterways and rich soil, has been home to the Narragansett and Niantic people for centuries,” Parlange said. “It was President (Howard) Edwards who transformed it from a small agricultural and mechanical arts college into a bustling institution with diverse opportunities for anyone to get an education.” 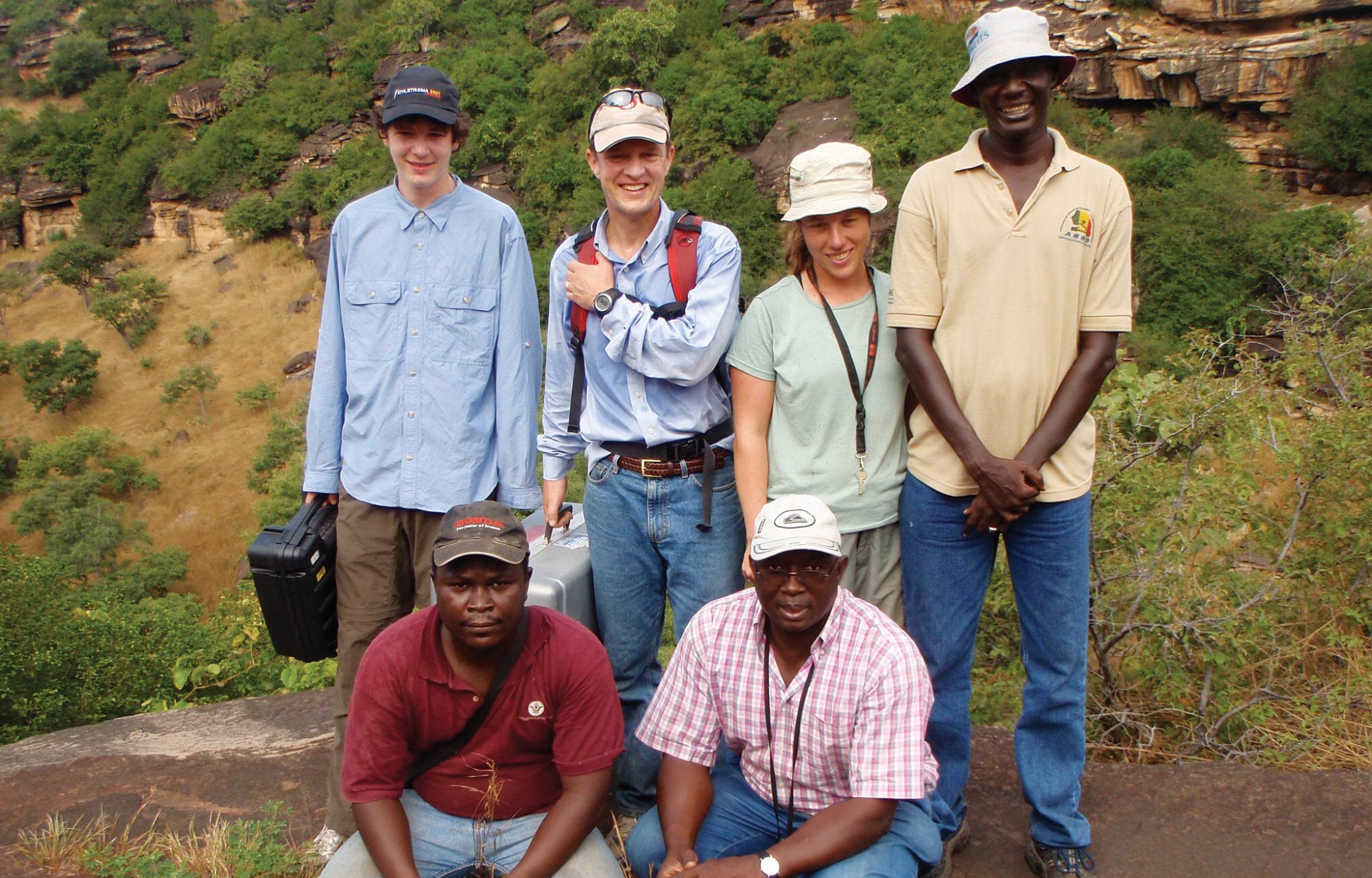 President Parlange was featured in the Summer 2021 edition of the University of Rhode Island Magazine.

Parlange acknowledged his parents, Yves and Eileen, his wife, Mary, whose “support and partnership, and let’s be honest, her brains, have made this journey possible,” and his sons, Luc and Brendan. He paid tribute to, among others, Walter Sheldon Rodman, the first student to earn a Master of Science degree in electrical engineering at the University, and Frank Keaney, the men’s basketball coach who invented the fast break. He acknowledged Jean A. Marriott, the first female graduate student to receive a Ph.D., and Reverend Hardge, who led the creation of the University’s Talent Development Program. And he quoted former URI president Robert Crothers, who participated in the ceremony.

Parlange said there are three central elements to building and leading a global research institution. “First, it’s about people. We will more effectively recruit, reward and celebrate research excellence, public scholarship, innovation and leadership. Second, it’s about an active and engaged learning environment. We will offer all our students more opportunities for experiential learning, internships and career development.

“And finally, it’s about cultivating a sense of place. We will create new spaces and opportunities to collaborate, network, recreate, learn, live and conduct research in an environment built on integrity, honesty and generosity.”

Thomas M. Ryan, chair of the presidential search committee and member of the Board of Trustees, said that in Parlange’s short time at the University, he has shown himself to be a leader of people.

“I must say, he has his own style and it works. Marc is not just a leader—he is a true servant leader—the best kind,” Ryan said. “Marc, your enthusiasm is infectious wherever you go—whether it’s soccer or football games, running with ROTC cadets, visiting research labs, eating in dining halls, tagging sharks and even visits to the state house. You bring every voice to the table—and you give those voices an opportunity to be heard.”

Student Senate President Grace A. Kiernan called Parlange a friend and mentor in her remarks. In summer 2021, she was invited to an event at URI’s Narragansett Bay Campus, and she was a bit nervous about not knowing anyone.

“But there was President Parlange,” Kiernan said. “As I made my way through the crowd, he spotted me and met me with a broad smile and warm greeting. That first conversation with this energetic and welcoming leader helped me in just a few moments. In that moment, he truly became a friend.”

The political science major from East Greenwich said she is glad the president knows her name.

“But from what I have seen, I am not unique. He spends a great deal of time with students, learning about their hopes and concerns and how they can flourish at URI,” Kiernan said.

“President Parlange is the true definition of a Rhody Ram, and he clearly bleeds Keaney Blue. I am grateful to have his support and to call him a friend. In just a short period, I have gained so much from his guidance.”