COVID-19 has been compared to 9-11, to wartime, and the Spanish flu for the disruption, the fear, and the uncertainty it has caused. Much like the assassination of President John F. Kennedy or the explosion of the Space Shuttle Challenger, it is a metaphorical guillotine, an event that divides time into what was before and what came after. 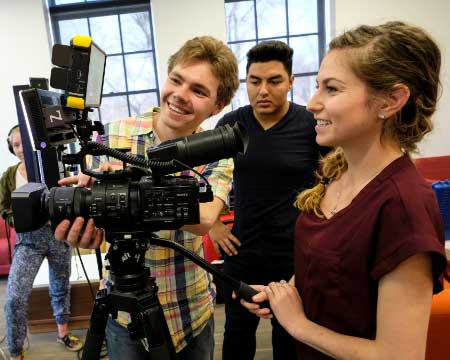 When you study journalism at URI’s Harrington School of Communication and Media, you work with seasoned practitioners and expert scholars learning the skills and tools required to compete in the world of 24/7 news.

For Mary Lind ’22 reporting for The Good Five Cent Cigar, URI’s student newspaper, COVID-19 has thrust her and her fellow staffers into campus history, as they spend the remaining weeks of their spring semester chronicling its effect on the university.

“This is a challenging, serious situation and also fascinating to cover because this is changing so rapidly, and there’s a lot of information that needs to get out,” Lind said. “All of us at The Cigar realize that it’s our responsibility as the paper on campus to keep reporting on this issue even when we’re not physically on campus.

“I feel I’m doing something productive that will help other people feel better about what’s going on right now.”

‘I feel I’m doing something productive that will help other people feel better about what’s going on right now.’

“We talked to every URI administrator out there. We’re focused on getting the information to people as fast and efficiently as possible,” Brown said. “It’s been an opportunity for us, as journalists, to really get that real-world, in-depth experience while reporting in the same way that world-famous journalists are—using technology like Facetime in addition to phone calls.”

Brown said her staff’s diligence and perseverance has paid off. “On average, our biggest articles would get 200-to-300 views,” she said. “Right now, our daily updates are getting around 900 views.

“Worldwide, people seem to be appreciating news more,” she added.

Lind has conducted interviews over the phone, through Google Meet and other web-based portals, and emails. Since URI’s initial decision to postpone in-person classes in mid-March, she has been writing a story or doing interviews daily.

John Pantalone, chair of URI’s Department of Journalism, praised the Cigar staff, noting the challenge journalists face in developing and writing stories while being isolated at home. “The Cigar is making exceptional progress and getting good experience doing it,” he said.

With reporting from Edhaya Thennarasu ’22, an intern in the University’s Marketing and Communications Department and communications major.