A typical spring day for graduate student Dominik Brysch pre-pandemic would begin with a run, then classes, then work on his master’s thesis—a schedule that took up eight-to-10 hours a day, weekends included.

This spring is the final sprint. Brysch will receive his master’s degree in industrial and systems engineering in August.

When the call came to assist in the effort to create personal protective equipment, PPE, for first responders though, Brysch made the time to volunteer. Now he and a dozen other engineering students are working seven days a week to create face shields for Rhode Island’s first responders in the 3-D printers lab at the Fascitelli Center for Advanced Engineering.

Brysch is a near-constant presence in the lab, personally monitoring the printers seven days a week, for 12-to-13 hours a day. In the past five weeks Brysch, his advisor, engineering professor Valerie Maier-Speredelozzi, technician Tanya Wang, who oversees the printer center, and the crew of student engineers have produced nearly 2,000 face shields.

“We’re running a small factory and demonstrating how we’re producing something quickly that is in great demand.” 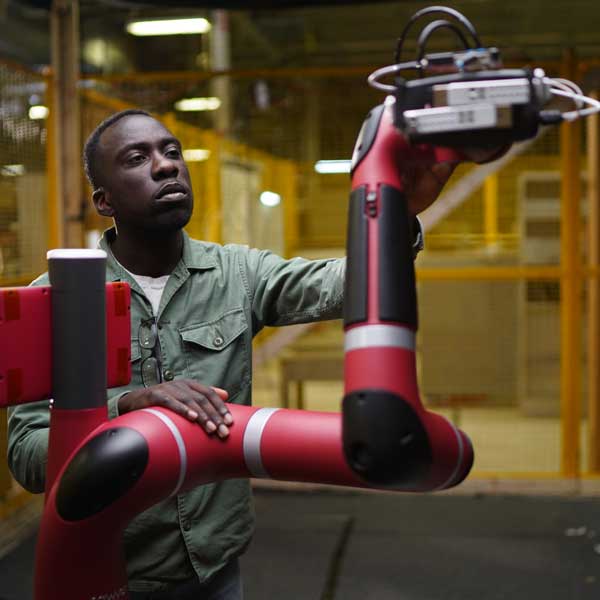 The work the students are doing is bona fide experiential learning, Maier-Speredelozzi said. Maier-Speredelozzi’s expertise is in manufacturing system efficiency, inventory and production control, and facility design efficiency. “We’re running a small factory and demonstrating how we’re producing something quickly that is in great demand,” she said.

The group’s work is part of a larger effort by Rhode Island Rapid Solvers, an organization of more than 80 volunteers from local universities, hospitals, nonprofits, businesses, government agencies, and makers communities, who are invested in creating PPE for the state. To date, the group has built equipment with donated supplies. Now it is fundraising to continue production.

There is great reward in this work, Brysch said.

“We recently made 600 face shields for local nursing homes. The administrator who came to pick them up, I think she said thank you 15 times in 10 seconds,” he said.

Demand for the face shields continues to grow and Rapid Solvers is encouraging first responders to place orders, so Brysch and his coworkers will be busy for some time to come. That doesn’t faze him.

You do what you can do for one another, he said. This attitude underpins Brysch’s research in climate change and sustainability as well. He has been studying at URI through the International Engineering Program’s partnership with Technical University Braunschweig in Germany. Brysch’s master’s thesis concerns climate change and carbon removal, specifically, and the development of technology that would allow homeowners to reduce the amount of carbon dioxide they generate.

Brysch needs 600 individuals to complete a survey key to his research. He is several hundred people short. Still, he is committed to the face shield project even as it competes with his research.

“I experienced a lot of help when I came to URI,” Brysch said. “I don’t have the skills to make people healthy again, but I can do my best to develop something to protect them from getting sick in the first place.”