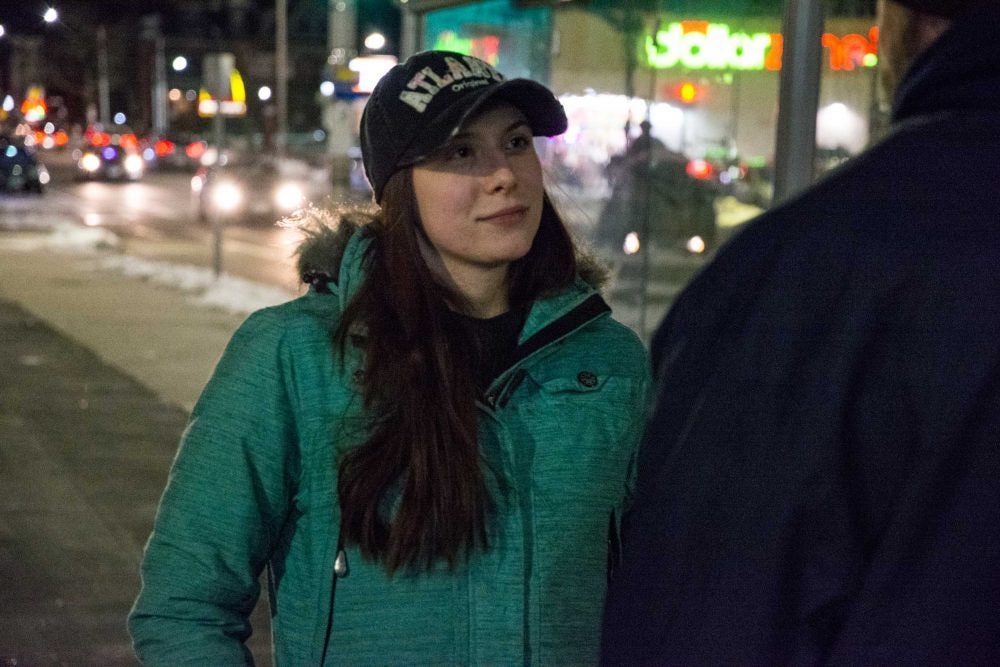 On a clear and cold Tuesday evening in February a small, slight figure walks a busy city street in Rhode Island’s capital city of Providence, approaching strangers most would go out of their way to avoid.

Nicole Schwab ’19 is there to offer help to the homeless: transportation to a hospital, perhaps, or a means to find food, emergency shelter, or adequate clothing.

Since November of 2017, Schwab has volunteered for House of Hope, a nonprofit dedicated to preventing and ending homelessness, partially through street outreach. Though House of Hope is not affiliated with URI, Schwab credits the University with introducing her to service work—and that, in turn, she says, gave her life purpose.

Schwab, who will graduate with a Doctor of Pharmacy degree in May, came to service work through her participation in URI Service Corps, formerly known as Alternative Spring Break. This spring, Service Corps is sending students to Dallas, Texas, to work on immigration, community revitalization, and urban poverty, to Northern California to assist in natural disaster recovery and environmental impact caused by wildfires, and to Brazil to assist Habitat Global Village in its work to provide affordable housing and clean water to communities there. Local service projects are also planned. URI Service Corps is run by students, who fundraise to pay their expenses and lead the trips.

Learn about one of our amazing student leaders Nicole by following the link below. Also remember that Out of State trip applications are due in five days!!! https://uriservicecorps.weebly.com/blog/nicole-schwab-never-stop-pouring #breakforchange #uriservicecorps #neverstoppouring

“I found URI Service Corps was a way to combine pharmacy with service,” Schwab says. “Advocating and working in community mental health is where I need to be.”

Schwab’s Service Corps projects have had her working in a soup kitchen, cleaning up poor neighborhoods, and digging trenches, among other things.

“It was the chance to collaborate with other people about things I’m passionate about. I feel fulfilled in doing what I can for other people,” Schwab says. “That wouldn’t have happened without my spring break experiences.”

And while there have been plenty of beautiful moments, those Service Corps experiences serve up some tough truths, too, as Schwab learned leading a cleanup in a poor Atlanta neighborhood. “We were in a small borough down from an aquarium and a billion-dollar sports complex. It was a crime-ridden, drug-ridden place with abandoned houses. There were heroin needles on the ground and stray dogs wandering around. There were gardens but nothing was growing,” Schwab recalls.

“People were driving with infants in the front seat. And some of the neighborhood’s inhabitants were ashamed, even angered, to see the students. People were saying, ‘Get out of here.’ That’s the reality: Some people will give you the finger and tell you to get out,” she continues.

Schwab sports a tattoo on the inside of her right forearm. It reads, “Never stop pouring.” She got it after the Atlanta trip. “I have it on my arm so that every time I reach out to someone I’m putting words into action,” Schwab says.

As she does every Tuesday night.