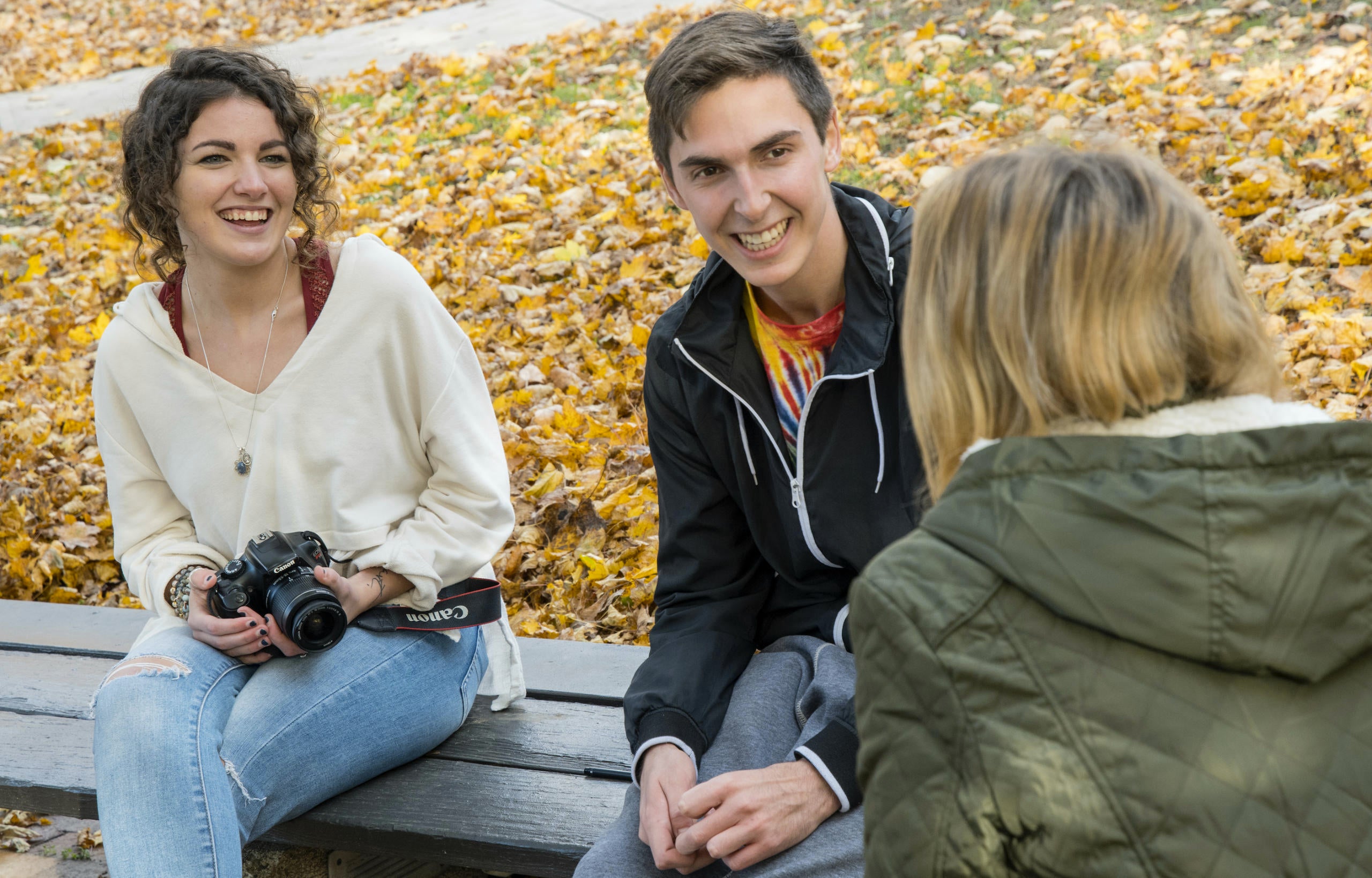 Kate Marcellino ’19 and Chris Leone ’20 never know what they’re going to get when they set out to do their Humans of URI pieces.

Modeled after the popular Humans of New York social media series, Humans of URI features its student stories on Facebook and Instagram. Marcellino and Leone follow HONY’s lead, asking questions of students but largely letting the conversation go where it will. Humans of URI was started by Leone’s brother Steve and his friend Emma Grace in 2015.

Sometimes students’ responses are short and funny, such as “I’m listening to Wiz Khalifa. I usually listen to country, though. Not today . . . because of the weather.”

And this: “I can be really forgetful sometimes. One day, I drove my car to school but then forgot and took the bus home.”

Other times, the subject is something important, such as an emerging philosophy:

“One thing that I stand by is ‘never stop pouring.’ Everyone is a coffee pot, and, eventually, there’s one last sip in that coffee pot that has some coffee grinds and isn’t as tasty. Every person you meet has that last sip in them, whether that be something they struggle with or something that has happened in their lives that they are not proud of. We were asked what we thought would happen if we filled that coffee up with water. Ultimately, it would dilute the bad coffee, and if we “never stop pouring,” the coffee pot would eventually overflow to get rid of the grinds (negativity/shame) and you are left with pure water. If you fill everyone’s coffee pot with water (love/care/attention/understanding), you never know the impact it may have on them.”

Or the anxiety of coming out:

“I’m a really non-confrontational person. Like I didn’t even come out to my mom in person. It’s really hard for me to tell anyone, yet I can so easily post pictures on social media showing the real me. I know people are really accepting these days but it’s still really hard. I don’t feel marginalized, but I feel like people look at me differently and I don’t want them to be unaccepting of the real me. Sometimes it’s just easier to pretend I’m straight because I don’t look like your typical ‘gay type.’ It makes it that much harder because you have to come out to everyone you meet. Although it can be hard, everyone here at URI has been accepting and I’m really thankful for that.”

Marcellino and Leone say the point of their work is to foster a greater sense of community and to give students the opportunity to share their stories. “Everybody on campus should be heard, should be made to feel welcome,” Marcellino said. “Every person’s life is as unique and complicated as your own.”

“It’s nice to see that in sharing people’s stories, we can lift each other up. We need more of that,” Leone said.

While both Marcellino and Leone find URI a welcoming community, the two are taking aim at the tendency of students to stick with friends made in their respective colleges and programs by highlighting what is common to all students.

“We want people to know that when there are days when you do feel alone, there are people who will listen,” Marcellino says. “We want more people to take their conversations to a deeper level.”