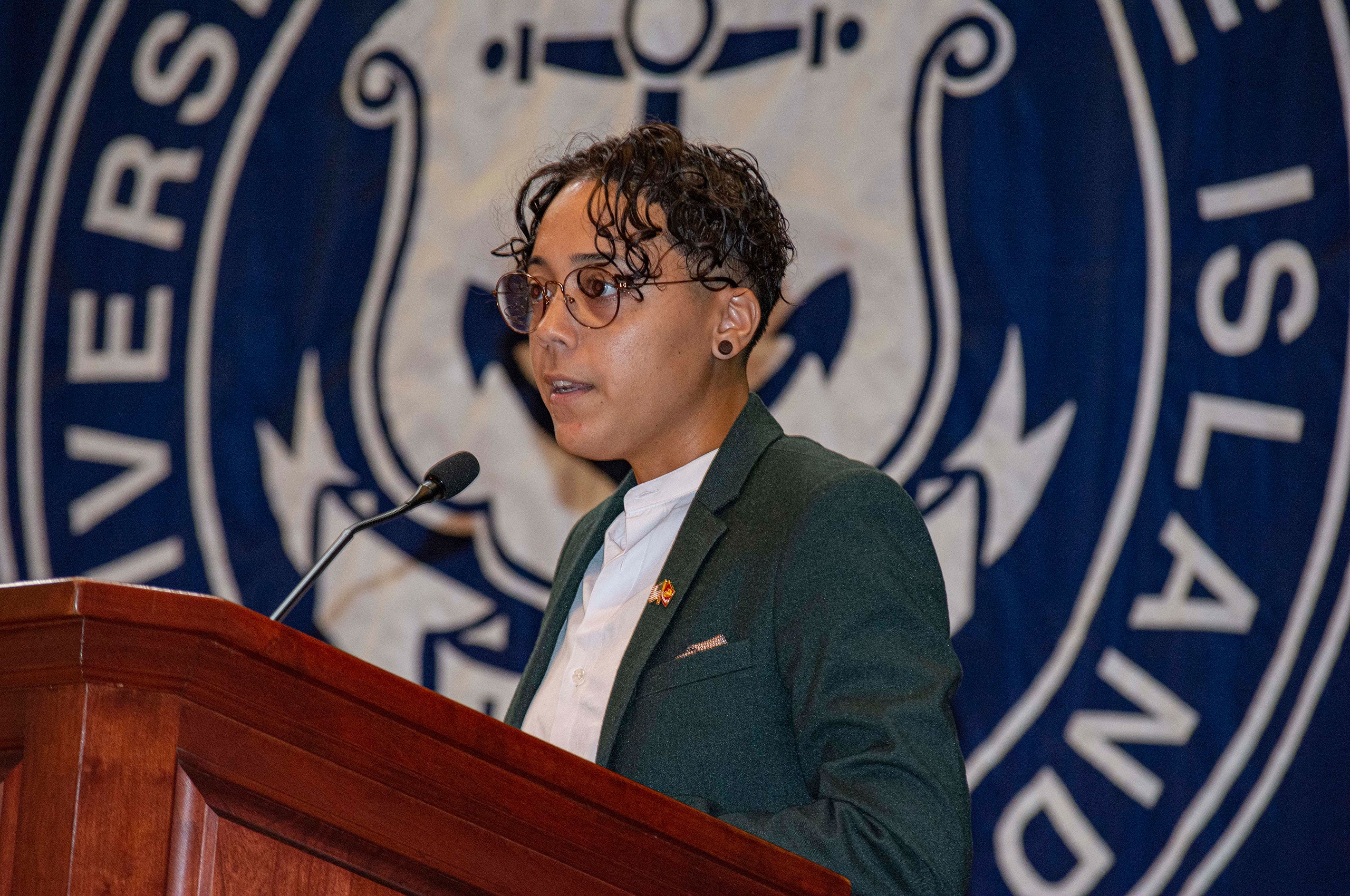 Tracy Santos, president of the URI Student Veterans Association, speaking at the Dedication of the University’s new Center for Military and Veterans Education on September 7, 2022
Photo credit: Nora Lewis

Tracy Santos ’24 wants fellow veterans to know URI is a place that understands what it takes to return to the classroom after life in the service.

President of the Student Veterans Organization, Santos’ goal as president is to build a supportive community for veterans — and bridge the divide between those veterans and traditional students. “My transition to URI was a difficult one. The first time I stepped foot on campus was the first day of classes.

“I didn’t know where anything was. I didn’t know that there was a center or an organization for veterans,” Santos says. “I didn’t have any kind of ‘Hey, welcome, non-traditional student and adult learner, this is what you might be experiencing’ letter.

Santos pauses. “I want student veterans to know that they are an asset in the classroom, that what they’ve been through, their life experiences, are so important,” she says. “When we’re given the opportunity, veterans will thrive.”

A Place of Belonging

The new Center for Military and Veterans Education in the Memorial Union offers URI’s veterans and current military and military-connected students a wide range of resources and a dedicated and centrally located space to connect with one another.

‘The loss of community is huge’

Scientific and military communities agree that transitioning to civilian life can be a monumental change for veterans. Gone is the structure of their days and the camaraderie of working and living with the same group of people. And for more than a few veterans, civilian life can’t match the military for that unique combination of adrenaline, responsibility, and import that military service requires.

“The loss of community is huge,” Santos says. “We’ve spent all of our days of deployment with the same group of people we now consider family. We’ve gone through hardships together, and now we don’t have anyone who understands what we’ve been through, what we’re still going through.”

Santos is enrolled in the interdisciplinary neuroscience program and plans to attend medical school. Long-term, she wants to work with veterans who have PTSD.

A Bronx native, Santos, 27, is a first-generation college student. She grins when asked to tell the story of her joining the Marines in 2012. Santos prefaces her story by saying she is the daughter of a strong mother who worked nights to provide everything her children needed. Often Santos and her mother communicated through Post-Its with her mother leaving ‘Hey, I love you’ notes on the kitchen table for her daughter to find in the morning. No conversation nor note preceded Santos’ decision to join the military, though. It was spur-of-the-moment all the way, Santos says.

“When I was a senior in high school, service members would come during your lunch period and sit outside the cafeteria and be like, ‘Hey, we’re here to recruit you,” she recalls. “And I remember seeing that Marine Corps uniform, how pristine it was, and thinking, if I have to do something, it’s gonna be that.”

Mom was not happy initially. “She said, ‘I told you to do something but not that,’ and, at first, she was like, ‘Nope’ because I had just turned 17,” Santos says and laughs.

Her mother eventually came around. Then, things happened quickly. Summer vacation was bootcamp at Marine Corps Recruit Depot Parris Island, in Port Royal, S.C. Santos made her career in aviation, a member of a light-attack helicopter squadron. She became an NCO, a non-commissioned officer, achieving the rank of sergeant. 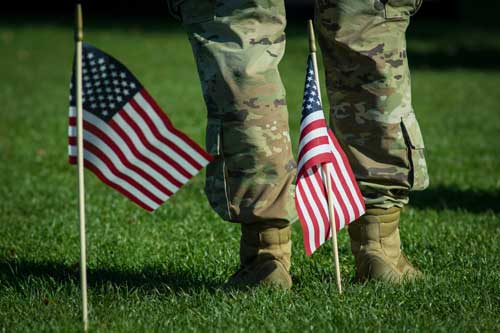 Learn more about the resources and support services the University offers to help veterans make a successful transition to student life.

‘I’m doing this for all of them’

“I’m grateful for the Marine Corps for who I am now. I had 10 years of wonderful military service,” Santos says. “There’s so much I’ve learned, and I attribute a lot of my great qualities to the Marine Corps.”

Santos has a message for her fellow Marines and other armed forces veterans.

“On average, student veterans have a 3.34 GPA. Fifty-two percent of us are married with children; 19% of us are single parents. We are leaders and high achievers. We didn’t get here by luck. We belong here,” she says.

Santos’ default is reserved, calm, collected. Except when talking about the future of the Student Veteran Organization at URI. Santos believes in leading with passion and motivation.

“I am in a position right now where I am so fueled by this,” Santos says. “I’m gonna do whatever it takes to help with what’s going on with veterans in crisis. People have lost their lives because they haven’t been able to regain a sense of community.

“I’m doing this for my Marines, the people who never got the chance to take the uniform off and achieve what they wanted to achieve.