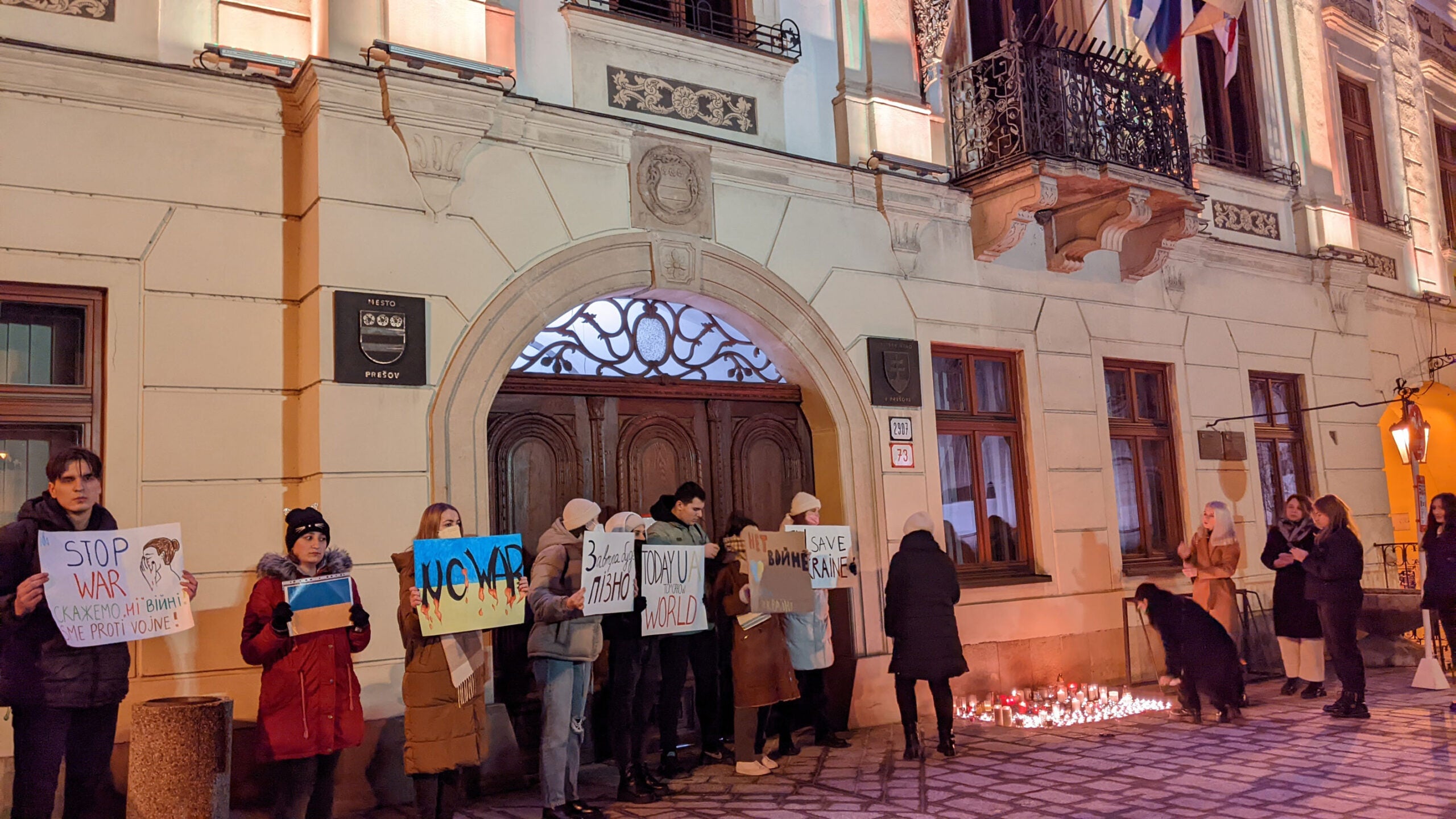 Anti-war vigil in front of City Hall in the Slovak city of Prešov, near the border with Ukraine
Photo credit: Courtesy of Jay Rumas

War was not on his mind.

Rumas’ host university, the University of Prešov, is 688 kilometers, about 428 miles, from the Ukraine capital of Kyiv. About 45% of its students are Ukrainian, Rumas says. A student of history and political science and an activist, Rumas’ relative proximity to Russia’s invasion of Ukraine has altered the tenor of his days. He’s comforting friends frantic about their families’ safety and participating in anti-war vigils. He’s collecting food, clothing, and other items for refugees.

As an undergraduate, Rumas served on the Student Senate and was vice president of the College Democrats and president of URI’s American Civil Liberties Union chapter. He says he is ready to do what he can for the Ukrainian people.

“This is where I should be. This is where the help is needed,” Rumas says from his dormitory room on fifth day of the war. “This is where the story is. I’ve gotten many texts from friends and family asking me how I am. I am fine. I’m lucky to be behind a NATO border and to be safe. And I am doing much better than people a hundred miles from me are doing.

“I’ve never had the experience of having bombs go off 600 kilometers away from me, though,” Rumas says. “I’m not threatened, but, still, it’s something I never expected I would experience.” 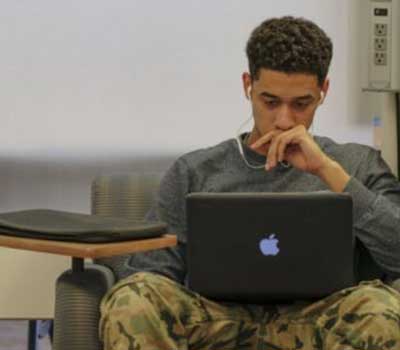 History is one of the most versatile undergraduate majors you can choose, exposing you to all aspects of humanity—arts, languages, science and economics—and setting you up for success in any career path you choose.

A student of history and politics

Rumas’ research and scholarship is, in a sense, about conflict. He came to Prešov to study the effect of populism on the Rusyns, a minority Slavic group that accounts for less than 1% of the country’s population of 5.4 million people.

“My initial goal was to conduct a study and perhaps publish in the realm of political science, but I’ve realized how much ethnographic and sociological work I’ve drawn upon to make that possible. So, I’ve thought about exploring that, but I’m still going to make a study of how the history of these people and their experience influences how they view and interact with politics today. I’m interested in how they vote, how they view the European Union, and how they view Russia. I’m trying to cast a wide net in the questions I ask, so that no matter what I end up with, I have the information.”

For the moment, though, the Russian invasion of Ukraine is top of mind. More than 2.3 million Ukrainians have already fled their homeland, according to the UN Refugee Agency. And the refugee’s plight is personal for Rumas. His maternal grandmother fled Czechoslovakia during the Nazi occupation in 1939. She was 10 years old. She and her family ended up settling in Ecuador, one of the few countries willing to accept refugees at the time, Rumas says. The family emigrated to the United States around 1950.

Old family stories and recent memories of conversations with James Mace Ward, senior lecturer in modern European history at URI, provide Rumas with a framework or a lens with which to view volatile global events. “We talked so often about Vladimir Putin’s agenda about Ukraine and about past Soviet interventions in this region. My history education has helped me understand what is happening and what, perhaps, needs to be done to stop it.

“That gives me comfort that this is not the first time this has happened. And, unfortunately, it’s probably not the last time this will happen. But we have the lessons. We’ve learned things that might be able to help us solve these things. And I know that’s easier said than done. But I think my education has allowed me to contextualize the events that are happening.”

“My history education has helped me understand what is happening and what, perhaps, needs to be done to stop it.”

Rumas says his Slovak and Ukrainian friends and acquaintances are afraid not only of what’s happening in their homeland but also that Russia might expand the scope of its invasion. “I don’t think it’s likely to happen, but whenever you have a conflict like this, tensions are high; people are angry. There’s always the chance that it’ll spill over into other areas.”

Many in Slovakia are sympathetic to Ukraine, Rumas says, because they remember the Soviet invasion of Czechoslovakia in 1968.

Studying political science gives you the tools you need to understand the barriers and solutions to change in the world.

‘I don’t want to be a neutral observer’

Of his feelings at the moment, Rumas says he feels a sense of responsibility which fuels a determination. “I’m aware I’m documenting things that may be very significant to world history. I came here to study the Rusyns but I also think it’s valuable to document what’s happening with the Ukrainians here in Eastern Slovakia and at the border—and, of course, to help where I can. I want to use my presence here to help people. I want my work to be used to the betterment of society. I don’t want to be a neutral observer.”

The purpose of the Fulbright, Rumas says, is to conduct research and produce scholarship that improves untenable situations. “I try to remain objective when I’m doing my interviews, but ultimately I have an agenda,” he says. “I am trying to understand something and to use that knowledge to achieve what I see as a better political system or a better world.

The Russian invasion of Ukraine has also underscored for Rumas the value of an education and the responsibility all Americans have to be informed.

“I think the events we’re seeing now show just how important it is to have people who know what they’re doing in charge, to understand how systems work, and to know how to make them work better—systems like international security arrangements, like nuclear deterrence—which, obviously, is very scary. It’s so important that the average American knows how important this is, how much work is needed to avoid situations like this.

“We have to think before we act. So, I think the careful study of these things is essential. If this region descends further into war and instability, our world will change. In addition to the obvious tragedies that would occur and unthinkable risks to humankind itself, millions will be uprooted from their homes. In the United States, people won’t be able to go to Europe or import things from this region because of the potential closure of borders, sanctions, militarization, and threat of violence. We’re not going to be able to have this kind of interconnected world that, unfortunately, we take so much for granted. That’s something at stake here.

“Studying history and politics is important because we need to know how to make decisions that define our future. Because many of us turn a blind eye to that, we’re in a position where many people around the world, including many Americans, have no idea what’s going on in the world.

“It’s very important to know what’s happening in the world so that you know how you can help as a global citizen.”

URI students and recent graduates who are interested in applying to the Fulbright program should contact the URI Office of National Fellowships and Academic Opportunities for guidance and institutional endorsement.