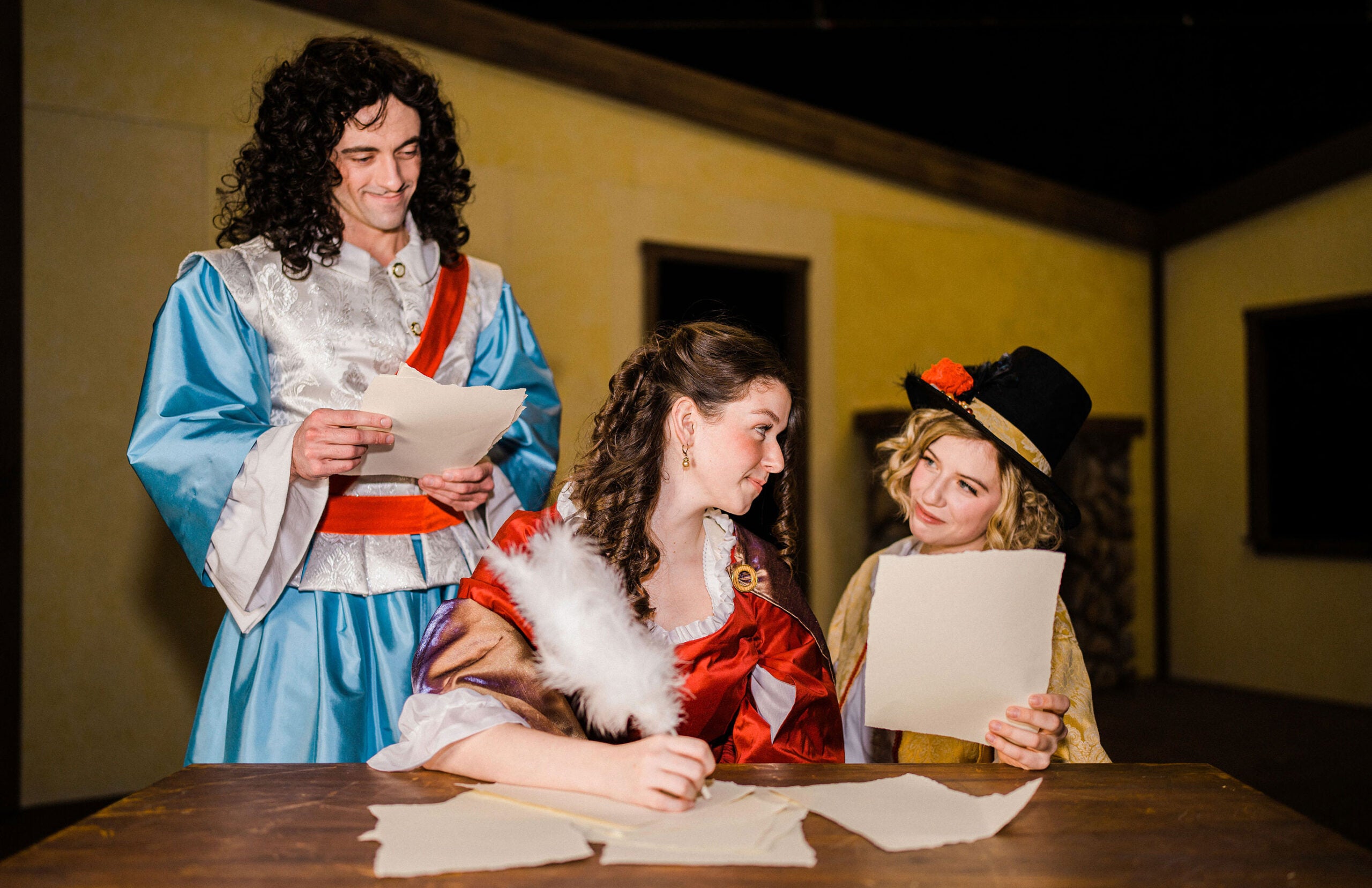 Aphra Behn’s life story – 17th century dramatist, poet, spy, and England’s first professional female playwright – has the makings of an engrossing Netflix documentary or biopic. But for now, theater enthusiasts can enjoy a live version of Behn’s story in Liz Duffy Adams’ popular, bawdy farce, “Or,” which opens Thursday, Dec. 8, in the University of Rhode Island’s Robert E. Will Theatre.

A woman of many talents

“Aphra Behn was very fascinating,” said Sarah Taylor ’23, who is directing the fully student-run production. “She was so ahead of her times. She was a bisexual woman, she believed in the bohemian ideal of love who you want, she was a spy, and she laid the groundwork for women in theater. As a woman in theater, I have so much to thank her for. And no one really knows who she is, so just telling her story was really important to me.”

With a lineup of historical characters – King Charles II of England, spy William Scot, actress Nell Gwynne – “Or,” is based on Aphra’s real life. But it also embraces the contradictions of her life – spy and artist, a writer of comedies amid a time of plague, war and the Great Fire of London.

Set around 1670, the play captures Aphra during one frantic night in the parlor of her rented lodgings. Released from debtors’ prison and anxious to break from the spy game, she is writing a play that must be finished by morning to secure a deal with a London producer. There’s just one small problem. An array of lovers and friends keep barging in – amid slamming doors. As she tries to put pen to paper, there’s an assassination plot to foil, a pardon to win, and an actress’s charms to resist.

“The characters, the language, every last joke – there is nothing left to be desired in a play,” said Jenna Muldoon ’23, who plays Aphra. “I think it will resonate with audiences for a myriad of reasons. As adults, we try to deny that sex is funny and that love, drama, and murder are exciting. But once we allow ourselves to indulge those feelings, Liz Duffy Adams and our characters will carry us away to a world of romance, laughter, and so much more.”

Muldoon, who wanted to be a writer as a child, has found a connection with the role of Aphra. “She played such a significant role in paving the way for female writers,” she said. “To take on such a role is an honor, and incredibly exciting and terrifying. My biggest concern is doing her justice and exciting the audience with how remarkable she was and still is.” 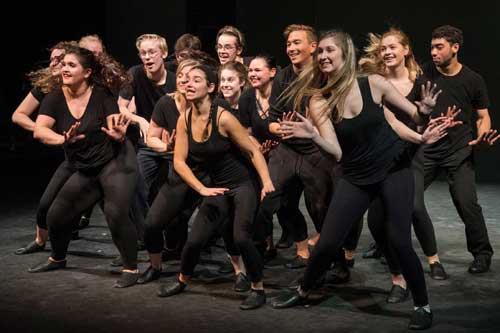 Alongside Muldoon, Peter McGreen ’23 and Olivia Humulock ’23 each play three characters. For all, the production presents them with a lot to unpack – learning beautiful, witty period dialogue, perfecting numerous accents, and becoming adept at the quick costume change.

Understudy Liam Roberts ’23, the resident expert on accents, has worked with the cast to refine the dialects for each character. For McGreen, those are the scoundrel Scot, the sensitive King Charles, and the larger-than-life theater manager Lady Davenant. For Humulock, it’s Nell, Behn’s servant, Maria, who Humulock plays as a “sassy Irish lady,” and the male jailor in the first scene.

“It’s been difficult really carving out the differences among them,” said McGreen. “The king, of course, is going to speak in the most proper, crisp, high English dialect. William Scot speaks in a Cockney accent that can be hard to understand. And then Lady Davenant – I have a low natural voice, and getting to that higher register and maintaining the accent has been a challenge.”

“I haven’t done a show where I did an accent. I always mess around with accents when I’m joking with my friends, but for this I actually have to sit down and practice switching between an Irish and Cockney accent,” said Humulock, of Narragansett. “The language is beautiful. You have the beautiful poetic side of Aphra reading poetry and then the more modern language. That’s what makes it funny.”

“It’s all very challenging,” added McGreen, who has found the art of the quick change a little like a pit stop in a NASCAR race. “But I feel good with the actors I’m working with. Jenna and Olivia have been very supportive, and Sarah is a great director.”

“The staff helps a few days during a regular student-run play to offer support, but in this case, we are fully supporting the production as a mainstage,” said David Howard, chair of the department.

Also, because of construction in the Fine Arts Center, the play is being staged in the larger Will Theatre, instead of J or G Studio.

“This show has really been a ‘training wheels off’ moment for a lot of us,” said Riley Nedder ’23, who is the costume designer. “We have the support of the department, which is wonderful as it’s enabled us to accomplish things that we normally wouldn’t on a student-run production. But it’s a lot of students’ first times doing things, which is both scary and exciting.”

Nedder has worked in the costume shop and made costumes for nine shows. But now she’s the one running the fittings and choosing the fabrics, she said. For “Or,” she’s worked on nine “period accurate” costumes that are also rigged with zippers, snaps and Velcro patches for quick changes.

“This has been an opportunity to spread my wings and really push myself,” she said. “Most of the things I’ve designed previously weren’t this research intensive, or didn’t have this many practical considerations.”

Sam Cote ’24 was the assistant scenic designer for this fall’s “Polaroid Stories.” But this is the first set he’s done on his own. His design calls for a realistic house, centered around a fireplace. “The show stars three actors and is in Will Theatre, so it was quite a challenge to design a set that fit the space and didn’t seem too big for the actors,” he said. “Designing for the first time has allowed me to make decisions and get my vision out on stage.”

“This play has given students an opportunity to showcase something that is only their work and made by students for students,” added Taylor. “I think that’s really special because we are the next generation of artists.”