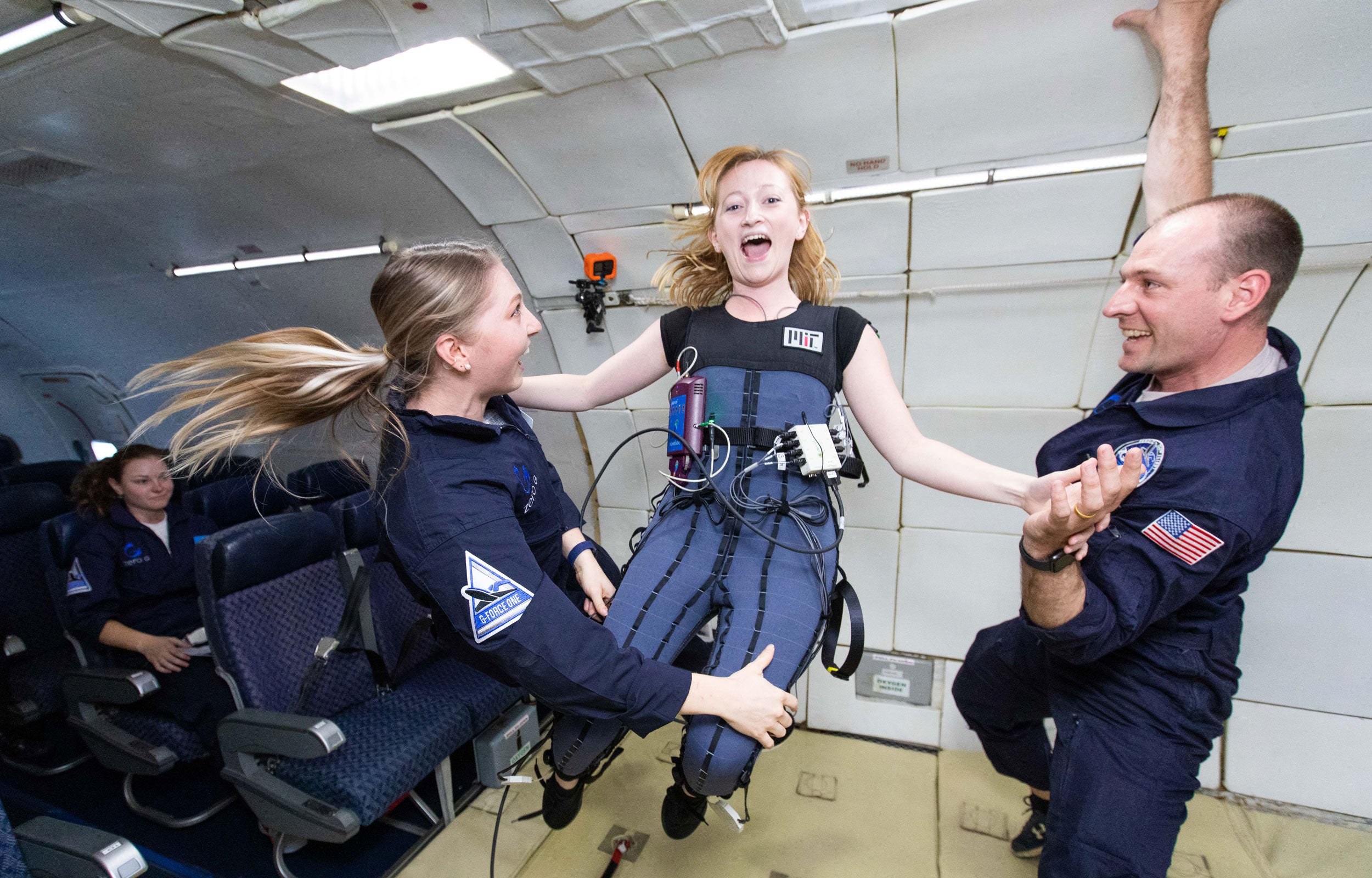 Rachel Bellisle ’18, center, seen experiencing a feeling of weightlessness while wearing the Gravity Loading Countermeasure Skinsuit, a garment designed to offset the effects of reduced gravitational pull on the body. Bellisle is involved in an ongoing project on the design of the suit.
Photo credit: Steve Boxall, ZERO-G/MIT Space Exploration Initiative

Rachel Bellisle ’18 struggles for the right words to describe the feeling of weightlessness.

“We experienced Martian, lunar and microgravity. In Martian gravity, both my teammate and I agree that, our brains just kind of broke. I have a video of the entire thing and the expressions on our faces; well, we’re completely mind-boggled by the feeling of Martian gravity,” Bellisle says. “It was stranger than microgravity because you still feel that you have some weight, and your brain can’t comprehend the fact that you don’t weigh as much as you should. 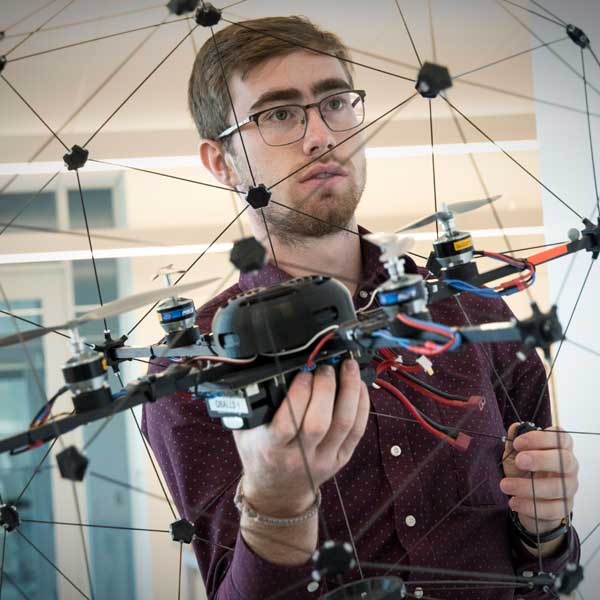 “As a human-spaceflight researcher, my research often involves thinking about how the human body works and moves in reduced gravity. I found that there is a huge difference between reading about reduced gravity and actually experiencing it. This flight has drastically changed my understanding of human movement in space.”

Bellisle works in MIT’s Human Systems Lab, devoting most of her time to the design of a skintight spacesuit, known as the Gravity Loading Countermeasure Skinsuit, that mitigates space’s influence on the body, which can trigger some pretty significant changes to the physique. Human spines have grown by inches. Bones can lose mass. Muscles atrophy. The human heart has been known to shrink by 25 percent in space. Once back on Earth, astronauts have reported motor-control problems affecting balance and coordination. The skintight Gravity Loading Countermeasure Skinsuit, commonly referred to as just plain “Skinsuit,” would compress the body to offset or mitigate the effects of reduced gravitational pull.

Bellisle’s free-fall adventure was to evaluate the suit’s performance through various simulations: microgravity, what astronauts experience in a spacecraft, and the gravitational pulls of the moon and Mars.

“I remember pushing off the floor and hitting the ceiling because I used too much force,” Bellisle says. It’s funny because, before the flight, veteran flyers remind you that you only need small movements, since you aren’t pushing your full body weight.

“And still, essentially every single person is flying all over the place, during the first parabola, all of your instincts are tied to Earth’s gravity.”

Where her adventure began

URI students have won some of the most prestigious scholarship competitions in the world. A fellowship award not only provides funding, but can connect you to other students and scholars with similar interests, and serve as a springboard to even greater opportunities.

Technology that benefits the Earth-bound

Bellisle’s work has application for the Earth-bound as well. Research on the compression suit could inform the making of medical compression garments used in the treatment of lymphedema, a build-up of fluid in soft tissue that results when damage to the lymph system has occurred.

The thing about compression, though, is it sounds a little uncomfortable, especially in the long term. The Skinsuit compresses the body from shoulders to feet. In a November 2021 interview with Wired magazine, Bellisle noted that Russian cosmonauts disliked a spacesuit whose aim was similar to that of the Skinsuit. “Essentially, it was a suit with a bunch of bungee cords,” Bellisle told Wired. The cords provided resistance with movement, similar in effect to exercise bands. But, once in space, the cosmonauts reportedly cut the cords.

“Comfort is one of our big design challenges: How do we design the Skinsuit so that astronauts want to wear it?” Bellisle says. “When I’m designing, I’m thinking about the human systems engineering aspect and the usability of these devices. There are a lot of qualitative metrics to consider in addition to the quantitative metrics we measure.”

Bellisle is working with MIT astronautics professor Dava Newman, former
deputy administrator of NASA under the Obama administration whose lab developed the first Skinsuit prototype a decade ago, and Caroline Bjune, a top-level staff member in Draper’s mechanical design and system packaging division. The team will publish research results this spring.

Asked if she sees space travel in her future, Bellisle laughs. For now, she’s content to be Earth-bound. There are other ways to soar. “I do like that my career path was a little unexpected. I never thought I’d be working on something as exciting as human spaceflight. It’s important for students to know this: You’ve got to put yourself out there and put in those applications because you never know what you could get to work on.

“It could be the thing you never thought was possible.”