When tiny diamondback terrapin hatchlings emerge from their nests in August and September, no one really knows where they go. Junior Richard Mercer is teaming up with graduate student Carolyn Decker to find out. 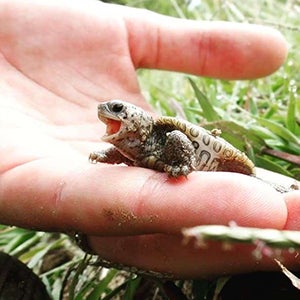 They spent the early part of the summer documenting the nesting process of the endangered terrapin—watching the adult turtles lay their eggs, implanting an electronic tag, assessing their health, and collecting other data—as part of an effort to protect the Ocean State’s rarest turtle. They also installed wire nest guards to deter predation and used trail cameras to determine if some terrapins nest after dark.Now the two students are chronicling the hatching success of each nest and preparing to track the movements of the hatchlings. “There are a lot of questions about their nesting activity and habitat usage,” Mercer said. “I want to help figure out some of the answers. I especially want to look at the difference in success of early nests versus later nests.”

He believes that some of the turtles remain in their nests until the following spring, while others hide out in nearby forests or head for their eventual home in local salt marshes. Why they select each option is unknown.

Mercer’s summer research is supported by the URI Coastal Fellows Program, a unique initiative designed to involve undergraduate students in addressing current environmental problems. Now in its 24th year, the program pairs students with a mentor and research staff to help them gain skills relevant to their academic major and future occupations. The fellowships run for an eight-month period, beginning in mid-May and continuing through December.

A double major in biological sciences and marine affairs, Mercer is also participating in several other research projects to conserve rare reptiles and amphibians in Rhode Island—like surveying the state for eastern box turtles, documenting road mortality of snakes and frogs, and searching for evidence of breeding by eastern spadefoot toads. On each project, he collaborates with URI graduate students, advisor Nancy Karraker, and state herpetologist Scott Buchanan.

Mercer has had a lifelong interest in wildlife. As a high school student, he volunteered on a variety of wildlife projects, from banding ducks to monitoring traps for black bears. He also got a taste of marine conservation as an intern at Mystic Aquarium.

Now, as he looks ahead toward graduate school and a career as a conservation biologist, he’s still deciding what kind of animals to pursue. “I really just want to gain as much experience as I can with as many different species as possible so I can understand more about their conservation status,” he said. “I’ll figure out my long-term plan later.”