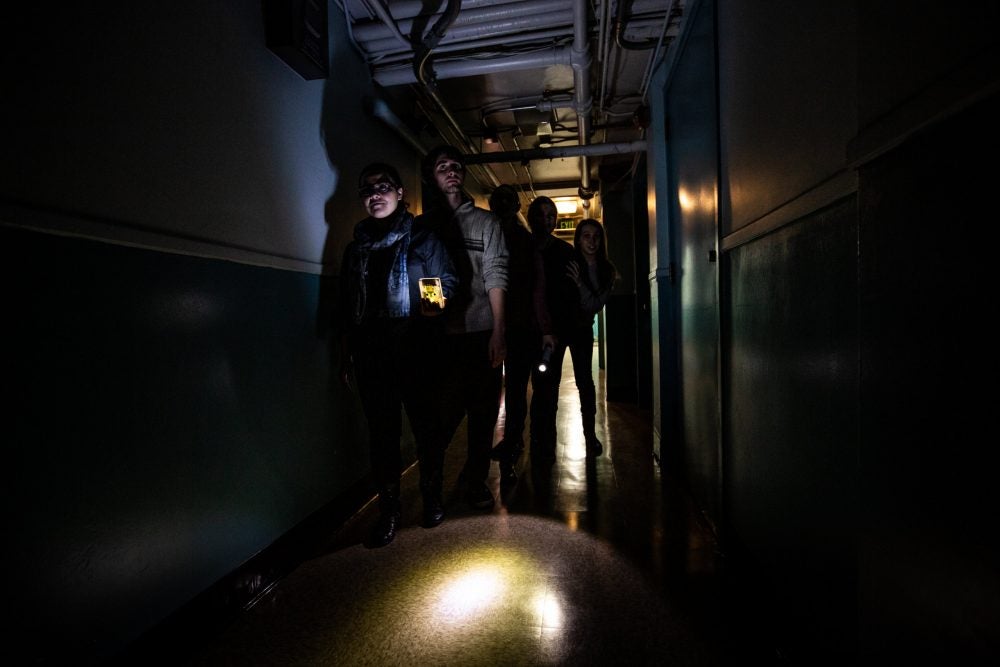 One night not so long ago, members of the URI Paranormal Society gathered in the basement of a hall on campus to conduct an investigation. It was a creepy setting, fairly reliable for producing something inexplicable.

There are more than 150 student clubs and organizations at URI.

There was talking and joking as the group asked questions of the air, hoping for a message from the beyond. Suddenly, talking stopped and moods changed. Laughter fled as tension advanced. Then they heard it: a low, guttural growl.

“In a fraction of a second, all of us were screaming and running up the stairs,” wrote Caitlyn Picard ’18 in the Nov. 2, 2017 issue of The Good Five Cent Cigar.

And thus a new tale was added to campus lore, and URIPS once again cemented its status as the keeper of a particular and peculiar type of University history.

The Society has been recording investigations of the University’s historic properties for more than a decade now. Only its members know all the details, all aspects of the stories. Locations of URIPS campus investigations, for instance, are kept secret to protect University properties. Riley Pearson ’19, a cell and molecular biology major whose focus is microbiology, is president of the Society. Nicole Petta ’19, a theater major, is vice president. Their mission: to either prove or disprove the supernatural through research, technology, and common sense.

But they’d rather affirm than debunk. And they’re not alone.

A 2009 Pew Research Center study titled “Many Americans Mix Multiple Faiths” included supernatural experiences in its survey questions. Researchers found that nearly three in 10 Americans claim to have had some contact with the dead and one in five say they’ve been in the presence of a ghost.

URIPS members have a protocol for every investigation. The group’s historian shares a report prepared about the place they’ll visit. Clothing recommendations are made: Clothes fit for attic crawl spaces make the cut; metallic clothing and heels do not. And no “V for Vendetta” masks. (Yes, someone tried it.) Investigation etiquette is reviewed. The Society conducts investigations with the support of Campus Police; behavior that would threaten that relationship is not condoned.

While URIPS is not a large group — membership hovers around 25 — many of its members have been involved since they were first-year students. Pearson and Petta live with other Society members. And alumni Corina Perugini ’16 and Emma Gauthier ’18 still attend investigations from time to time. “There’s a lot we can’t explain that deserves study and verification,” Gauthier said.

“I don’t want to see anything, really,” Perugini said. “The people who sense things are more open to that, I think. I am not one of them. I just find the scientific side of things so interesting and cool,” she added.

Pearson and Petta are more like the “X-Files” Fox Mulder: They want to believe.

“I’d like to see something,” Pearson said. “In a perfect world, a full-bodied apparition would appear and walk through the wall. That would be really cool.”

“Oh, I don’t even know,” Petta said. “To see [a ghost] would be the most validating thing.”

The URI Paranormal Society is one of more than 150 clubs serving the diverse interests of the University’s student body. In this case, “diverse interests” extends to extraterrestrials, conspiracy theories, cryptozoology, and divination. But not zombies. That’s a different club.