“One of the great thinkers in higher education” 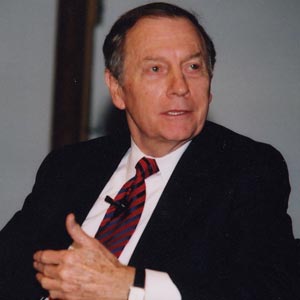 Frank Newman, a visionary in the world of education who served as the president of the University of Rhode Island from 1974 to 1983, died Saturday, May 29 after a short illness. A resident of Jamestown, he was 77.


During his tenure at URI, Newman navigated the University through troubled times and reversed the tide of declining enrollment. He created the College of Human Science and Services, revamped the general education curriculum to emphasize global perspectives, launched the research vessel Endeavor, and recognized the importance of higher education in the lives of older students.


URI President Robert L. Carothers called Newman “one of the great thinkers in higher education” and “a man of immeasurable energy and amazing good will.”


Provost M. Beverly Swan, who worked closely with Newman during his presidency, said Newman “was known for his openness and for being unpretentious. He always had an optimistic eye on the future and had a wonderful sense of humor.”


Newman’s influence on education continued after he left URI. He was the lead author of the Newman Report, an influential document filled with innovative ideas that served as a national blueprint for federal legislation related to public education. He served as president of the Education Commission of the States, a non-profit, nonpartisan organization that helps governors, legislators and other state education leaders develop and implement policies that improve education.


Most recently he was director of the Futures Project, an education think tank funded by the Pew Charitable Trusts based at Brown University, where he was also visiting professor of public policy and sociology.


The University of Rhode Island honored its eighth president in 2002 by naming its renovated admissions building on 14 Upper College Road in his honor.