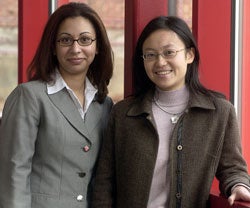 
KINGSTON, R.I. — November 22, 2004 — Most researchers are very careful with the results of their research to make sure they aren’t damaged or destroyed.


Not Yan Sun. As soon as she builds her system, she attacks it and tries to break it. That’s because her research is aimed at improving computer network security.


“You have to attack the system to test its security to see how well it fares against hackers. And you have to assume an attacker knows your system well,” said Sun, one of two new assistant professors at the University of Rhode Island’s College of Engineering.


Sun and Mayrai Gindy are just one semester removed from earning their doctorate degrees, and they are enthusiastically beginning their careers as teachers and researchers at URI. They are among five new URI faculty members hired through the National Science Foundation’s ADVANCE program, which is designed to boost the careers of women scientists and engineers.


“The ADVANCE program is partly what attracted me to URI,” said Gindy. “It allows my teaching load to be lighter in my first few years so I can focus on building my research program.”


Gindy, an assistant professor of civil engineering who lives in North Kingstown, is teaching a graduate course in structural engineering design this fall, and she is establishing several research projects. Among her research interests are self-consolidating concrete, which is more viscous than conventional concrete, and the use of recycled materials in roadways.


“Shredded tires have been used in pavement for a while, but there has been limited research on the use of rubberized concrete, in particular the potential use of radial steel belts in recycled tires as structural reinforcement,” she explained.


Originally from Wayne, N.J., Gindy is also following up on her dissertation research monitoring the first bridge in New Jersey designed under new federal guidelines. A variety of sensors — strain gauges, accelerometers, vibrometers and more — have been implanted in the Doremus Avenue Bridge in Newark to measure strain, vibration and other factors when heavy traffic crosses the bridge.


Rhode Island has yet to fully implement the new guidelines, so Gindy will lead a training workshop for the state’s bridge engineers in January to update them on the design changes.


One of Sun’s computer security research projects focuses on trust modeling and evaluation.


“Just like we must assess the trustworthiness of people in a social network, we also must evaluate the trustworthiness of ad hoc computer networks. In order to get something done, you often need to trust that the other computers or devices in the network haven’t been compromised,” said Sun, a native of China who now lives in South Kingstown.


In the meantime, the assistant professor of computer engineering is enjoying her first months in Rhode Island. “The department is really supportive. I have a corner office and several mentors, the department is helping me develop a new course on information and network security, and I’m going to conferences and creating an identity for myself in the academic community,” Sun said. “What more could I want?”