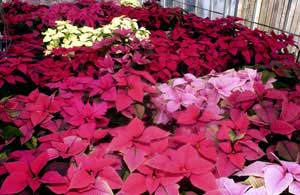 KINGSTON, R.I. — December 13, 2004 — Poinsettias are an excellent way to brighten the holiday season, but their color often fades quickly and many people find that they don’t last much beyond the first of the new year. But a University of Rhode Island plant expert says that doesn’t have to be the case.


Rosanne Sherry, coordinator of the URI Master Gardener program, says that in recent years, better cultivars of poinsettias have been developed so they keep their color well into spring and can even survive through another holiday season if a little care is taken.


“It used to be that if you bought a poinsettia around Thanksgiving, it would be dead by the day after Christmas,” Sherry said. “But now people can make them last longer if they treat them right.”


Sherry emphasizes that poinsettias are tropical plants originally from Mexico that can be found growing in the ground year round in the Caribbean and other warm climates. “They’re very sensitive to cold weather and begin to show signs of stress if they’re exposed to temperatures below 50 degrees, even for a short time. So when you purchase one, make sure it’s wrapped in a protective sleeve and take it right home. Don’t leave it in your cold car while you’re doing the rest of your Christmas shopping.”


While Sherry says it’s important that the plants are watered occasionally to keep the soil moist, too much watering will drown them.


“Most poinsettias are sold with decorative foil wrapped around the pot, and that is often the culprit in drowning them,” she explained. “The foil holds the water in and floods the plants. So I tell everyone to cut off the bottom of the foil so excess water will drain out.”


After the holidays, Sherry says that a poinsettia should be treated like any other houseplant. Place it in a sunny spot away from drafts or extreme heat, and water it once or twice a week.


The plants should keep their decorative color through the winter months and begin to fade in early spring. They should be fertilized once in March, and new leaves should begin to sprout soon after. “If it still has healthy leaves, it’s still a healthy plant,” Sherry said.


In June or July, the plants should be cut back to about half their former size and fertilized to encourage new growth. They can also be put outside in the summer months, though it should be shielded from the hot sun. The plants should be brought back inside by Labor Day before the temperature gets cool again.


The critical step in getting poinsettias to bloom again the following holiday season, according to Sherry, is to control the hours of complete darkness they get during the fall.


“Beginning in about mid-September, make sure the plant gets 13 to 14 hours of darkness each day in order to set the buds,” said the URI plant expert. She recommends covering the plant with a box or a basket every night, and then uncovering it every morning so it gets full sun for the rest of the day.


“Only total darkness will set the buds right,” she noted. “If you put it in an unused room with the lights off, make sure that a street light or security light outside isn’t illuminating the plant, even a little bit, because the plant won’t respond appropriately.”


Sherry added that it’s a popular misconception that poinsettias should be put in the closet and ignored for several months in the fall. “Without any sun or water, you’re going to open that closet door at Christmas and find a wilted plant.”


After about 40 days of what Sherry calls the “darkness ritual,” color will begin to return to its leaves and the ritual will no longer be necessary. By Thanksgiving, the plant should be close to full color again.


“And then, if you’re lucky, you can start the whole process all over again,” she said.


For more information on this and other gardening questions, go to the URI Master Gardener website at www.urimga.org.