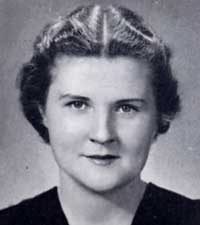 KINGSTON, R.I. — December 29, 2004 — The University of Rhode Island’s debate team has plenty to talk about and the latest topic is a recent $123,000 gift. The gift is from the estate of a former URI debater who often credited her successful career to her debate experience.


While attending the University in the mid 1930’s, Mary McCormick was president of the women’s debate team–men and women competed in separate, but closely aligned divisions in intercollegiate debate until the 1950’s.


After graduating from URI in 1937 with a degree in home economics, she completed her American Dietetic Association Internship at New York University and became a registered dietician. She met and married Joseph J. Kelly, an attorney for the Social Security Administration.


For many years, she was a home economist and traveled the country for General Foods. After retiring in 1980, she served as a nutrition consultant and traveled the world with her husband, who is now deceased. She died in 2003.


Debate, which is part of URI’s College of Arts and Sciences Communication Studies Department, has been a tradition at URI since the founding of what was then Rhode Island State College. By 1903, the debate team hosted debates on the quadrangle with other local colleges. Since then, the format in which the team competes has become much more structured, but the same spirit of proving a point continues.


Today the team is part of the National Forensics Association, which includes competitors from Boston University, Cornell, Northeastern, and Harvard. URI has consistently qualified for the national tournament through a series of qualifying tournaments held each year.


“I’m proud to be part of this tradition at URI,” says John Devine, director of debate. “It’s a privilege to work with these students who are as bright and capable and competitive as you will find. Debate is the essence of education. To do it, you learn the skills to take a set of facts and evaluate what they mean in a new context. Whether it’s a philosophy class or a science class, that is what education is about, not just learning ideas, but applying them to your life.”


During the University’s Centennial, Stephen Wood, professor of Communication Studies, director of Intercollegiate Debate from 1982-1992, and chair of the department from 1992 to 2004, received a letter from Kelly who noted that she planned to leave part of her estate to the debate program.


“Through the support of alums such as Martha McCormick Kelly, URI intercollegiate debate has maintained a long record of distinction. This endowment will allow us to expand opportunities for all students interested in the demands of competitive debate.”


Anyone interested in learning more about planned giving at the University of Rhode Island should contact Wade Wilks, Director of Planned Giving at 401-874-2296 or wwilks@advance.uri.edu.