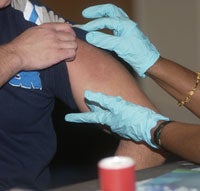 KINGSTON, R.I. – December 2, 2004 – Registered nurses, University of Rhode Island students, and others who volunteered at the University’s bioterrorism clinic on Nov. 19 said it was a great learning experience.


Jordanna Foley was one of 25 registered nurses from The Miriam Hospital who volunteered. “It is necessary and I am proud to be a part of it,” the Warwick resident said while pausing from “vaccinating” volunteer patients. “It’s about raising awareness and like any good nurse, I want to help raise the awareness of the public about these types of preparations.”


Foley and her 24 colleagues who volunteered as staff at the clinic are in a special program for registered nurses to get their bachelors’ degrees through URI.


During a two-hour bioterrorism clinic exercise run in response to a simulated smallpox outbreak, the University of Rhode Island “vaccinated” 285 patient volunteers. The University was asked by the state Department of Health to conduct a bioterrorism response clinic exercise this fall after having successfully run the largest university-based simulated clinic in the nation last spring in response to a mock anthrax incident.


Nancy Doyle-Moss, URI clinical nursing instructor and co-director of the exercise, said The Miriam Hospital nurses were put in leadership roles, such as vaccinating the patient volunteers. “This was a wonderful opportunity for them, and it was wonderful for our 15 URI student-nurses who volunteered to learn from veteran, experienced nurses,” Doyle-Moss said. “It was a great chance to practice our response to an emergency.”


Maureen D’Amour, a junior URI nursing student from Milford, Mass., said, “If something like this happens where a terrorist releases a biological agent, then we are much better prepared to respond.” 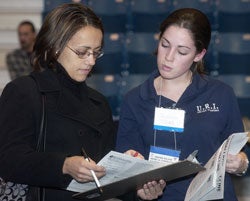 Fellow URI nursing student Jessica Todd (shown here, at right) answered questions from patient volunteers as they filled out their forms and then moved to the patient interview station. “This is worthwhile because it’s preparing medical professionals, as well as the general public,” the Exeter resident said. “You can never know in advance what the anxiety level will be, but by practicing the steps for an emergency response, we can make the process smoother and help put people at ease.”


Sylvia Cunha, a Rhode Island College nursing student from Central Falls, volunteered as a patient. (Shown here talking with Jessica Todd.) “This was well done. The clinic volunteers explained everything and it was well organized. People are not aware of the severity of such an outbreak.”


“It’s necessary to practice to avoid panic,” said Jennifer Rezendes, another nurse from The Miriam Hospital.


Will Daniels, a freshman member of the men’s basketball team who is majoring in animal and veterinary science, went through the clinic as a volunteer. “It’s important to know the procedure in an emergency. It was fast, and the clinic helped me be prepared because the world is more dangerous.”