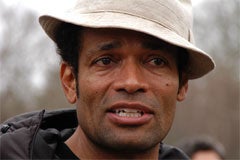 
“Can Cybill’s hair be wrapped in toilet paper?” yells her assistant. The actress wants to rest, but doesn’t want to spoil her hairdo. The answer was yes.


“Can we have quiet on the set?” yells another as the action warms up. A young man with an earphone paces. “Picture up!” he shouts. A second later he barks: “Rolling sound! Rolling!” 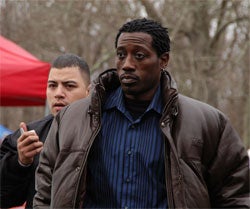 As the cameras film a street scene with Snipes (at left) and actress Jackie Quinones, nearby Woodvale Farm goats and horses seem unaware that the glitter of stardust has settled in their pasture.


Hard Luck interweaves the story of three different couples. “It’s quirky, dark and funny,” says Van Peebles who writes, acts, and produces as well as directs. For instance, he says, Cybill plays a serial killer. He smiles at the thought. “The most least likely person to be one.”


The movie, which is being filmed entirely in Rhode Island, will wrap up around Christmas and should be out in the theaters by spring.


Van Peebles said the recent tax credit for filmmakers attracted the production to the state. Sitting down under one of the big tops for a catered lunch which offered the crew anything from artichokes to ziti, Van Peebles and producer Brad Wyman listed reasons they found filming in Rhode Island to be advantageous: The state’s diversity of peoples and cultures, its diversity of landscape and food, its beautiful architecture, and its close proximity to New York. “And the friendliness of the people,” says Van Peebles. 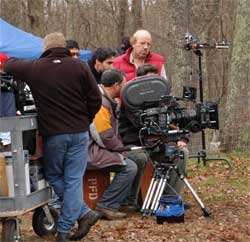 They liked filming at Alton Jones. The location was perfect, offering them a farm, a lake, and a swamp. And they didn’t have to deal with parking problems or traffic.


“It was easy for us to accommodate the production,” said Tom Mitchell, director of the Alton Jones campus. “We’re used to customizing all different kinds of requests, but this was our first movie. It was fun to see how they do it. There was a lot of high energy.”


Mitchell notes that Steven Feinberg, head of the state’s Film & Television Office, suggested the West Greenwich site to the moviemakers. “He was a camper at Alton Jones when he was a student,” says Mitchell, noting that Feinberg told him that he has the 2,300-acre campus in mind for other movies.