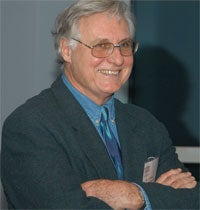 KINGSTON, R.I. — November 8, 2005 — Al Killilea, a political science professor at the University of Rhode Island for the past 36 years, is a quiet, modest man. “Basically, I’m a shy person,” he says. “I’m more comfortable in the classroom than just about any other place. I don’t like to lecture in class; instead I have conversations with my students.


“And I’m such a hypocrite,” adds the Kingston resident with a soft laugh. “I tell my (shy) students that they must speak up, although frankly I never spoke up when I went to school. But I let them know, I’m a fellow-sufferer.”


Those classroom conversations continue to have an impact. For example, two of Killilea’s former students, Bill Dolan, class of 1981, and Bruce Wolpert, class of 1975, are spearheading an effort with gifts totaling $50,000 to establish an endowment to honor Killilea for his exceptional teaching and guidance.


The two Providence attorneys, who came up with the idea independently, announced the endowment at a reception this fall attended by nearly 50 lawyers, judges, and political science alumni.


They will help seek additional contributions from other attorneys, political science alumni, and others to build the fund to a $500,000 professorship or even a $2 million chair.


“He inspired me,” says Dolan, an attorney at Brown Rudnick. “He’s entirely giving of himself. He’s the kind of person who works behind the scenes to promote students. I think it’s time that those of us who have benefited from his tutelage give something back.”


“Al Killilea challenged me intellectually like few other professors ever did,” says Wolpert, a partner at the Wolpert & Gerstenblatt Inc. “He’s a great guy. I’m honored to be part of this effort.”


“I’m extremely touched,” says Killilea who now is teaching the children of some of his students. He still hears from a fair number of his former students and has attended some of their weddings.


“As one of our very best teachers, scholars and citizens, and as one of the first recipients of the URI Teaching Excellence Award, Al has educated, mentored and inspired literally generations of students,” says Winifred Brownell, dean of URI’s College of Arts and Sciences. “We are delighted and touched that two talented alumni launched the endowment and encouraged other alumni to join them in this groundbreaking initiative. This endowment will provide critically needed support for outstanding teachers and scholars in political science. I am recommending that Dr. Killilea have the honor of being the first recipient of the endowment’s support, which will rotate among our top faculty members.”


In addition to his teaching duties, Killilea founded the multi-disciplined Mentor/Tutor Internship program in 1998 with eight students. Today, there are 130 URI student-mentors each semester in elementary through high schools from Westerly to Providence offering children friendship as well as a firm footing to keep them from slipping in their schoolwork.


For many years, the professor has also helped students compete for the prestigious Truman Scholarship. “That’s a labor of love,” he says. “We have so many students that deserve to be recognized.”


Anyone interested in contributing to the Dr. Alfred Killilea Endowment in Political Science should contact Tom Zorabedian, senior development officer for the College of Arts and Sciences, 401-874-2853 or zman@advance.uri.edu.