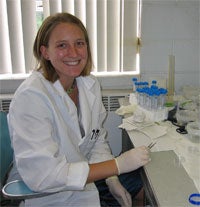 KINGSTON, R.I. — November 22, 2005 — University of Rhode Island senior Rachel Hadley has become immersed in a world of DNA amplification, bacteria cultures, disease surveys and histological investigations. These complex processes have helped the Tiverton resident play an important role in research to learn why some types of oysters are susceptible to disease pathogens.


“Our ultimate goal is to identify the molecular marker in their genes that is involved in resistance to disease,” said Hadley, a 22-year-old biology and psychology major. “First we have to find those that don’t die from the disease, and then we try to understand why.”


“I found that the larvae are very susceptible to disease and they die quickly, but as they get bigger they become better at evading the pathogen and they have better defense mechanisms,” she explained. “The Vibrio cluster around the edge of the oyster larvae, and when the larvae open up to feed, the bacteria invade. Once they are infected with the bacteria, they spin around, settle to the bottom and die.”


Funding for Hadley’s research was provided by the URI Coastal Fellows Program, a unique initiative designed to involve undergraduate students in addressing current environmental problems. Now in its tenth year, the program based in URI’s College of the Environment and Life Sciences teams students with faculty, research staff and graduate students to help them gain skills that will ensure their future success. Additional research funding was provided by the Rhode Island Aquaculture Initiative.


It took a while for Hadley’s interest in biology to blossom. She started out as an education major, switched to business and then to psychology. “What I like most about psychology is the biology of psychology,” she said. “We’re biological beings with a psyche, one unit that functions together. I’m interested in investigating the interrelationships between our biology and psychology.”


The former president of the URI chapter of Psi Chi, the national psychology honor society, Hadley isn’t quite sure yet how to merge her two majors into a career. She knows she’ll have to go to graduate school, and she is weighing potential jobs in research and higher education.


“I have so many interests, I can see myself going so many places, it’s hard to pinpoint what kind of career path I want to dedicate myself to,” said the URI student. “I’ve also thought about a career as a high school science teacher, or maybe I’ll go straight into molecular research.


“Biology is new and exciting to me, and there’s so much left to learn that I feel like I’m on the tip of the iceberg,” she added. “I’m just so excited to be pursuing knowledge.”