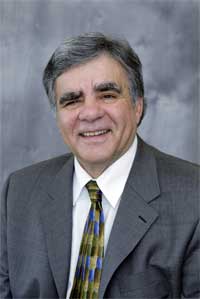 
Alfonso is charged with providing the vision and strategic planning to develop and enhance the quality and visibility of the University’s research, graduate education and outreach programs. Among his priority projects will be the establishment of a research foundation at URI and to lay the groundwork for the development of a commercial research park adjacent to the Kingston campus. He will also serve as a member of the University’s Council of Deans.


“Dr. Alfonso brings a wealth of knowledge and experience, and we are fortunate to have an administrator of this caliber join us,” said M. Beverly Swan, URI provost and vice president for academic affairs. “I am excited about the major contributions he will make to our research efforts here at the University of Rhode Island.”


In addition to his role as vice provost, Alfonso will also be a professor of communicative disorders in the URI College of Human Science and Services.


Alfonso comes to the University with nearly 30 years of research, teaching and administrative experience. As the University of North Dakota’s first vice president for research, Alfonso created a research foundation, led an effort to establish a research park, and took steps that led to a doubling of research grants awarded to the institution.


“While we will work with our state and congressional leadership to enhance the research support of all of the University’s disciplines, we will focus on extending URI research to attract corporations to Rhode Island, to fully engage URI researchers with corporate partners, to provide corporate internships and job possibilities for URI students, and to retain the value of research innovations in the state to enhance regional economic development and create more high-paying jobs for Rhode Islanders,” Alfonso said. “I look forward to expanding and strengthening the linkages between the URI research enterprise with the wonderful opportunities that exist in Rhode Island and the surrounding regions.”


URI receives more than $60 million annually in sponsored research and outreach funding for such topics as marine and environmental science, health science and behavior, advanced technologies, and children and family studies. Its graduate school enrolls approximately 3,000 students in 53 masters’ and 33 doctoral programs, and it awards more than 600 degrees each year.


A native of Bridgeport and Fairfield, Conn., Alfonso earned an undergraduate degree from the University of Connecticut, a master’s from Western Michigan University, and a doctorate from Purdue University. He has been awarded more than $14 million in federal research grants and published more than 130 book chapters, articles and abstracts on speech acoustics, perception and speech physiology. He is a 1990 Fulbright Research Scholar to The Netherlands and a fellow of the American Speech-Language-Hearing Association.