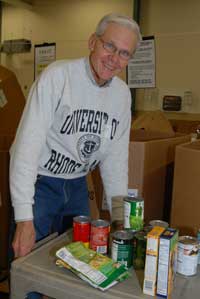 
KINGSTON, R.I. — December 15, 2006 — The University of Rhode Island’s Rhode Island Alumni Chapter can sort, stack, and box with the best of them.


About 40 chapter members and some friends spent an evening last month at the Rhode Island Community Food Bank, taking different posts on the sorting, stacking, and boxing assembly lines. They’ve become experts at the process since the chapter has been sorting food for the food bank for the past five years. 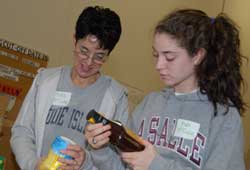 This year, the URI group was presented with the “Golden Pallet Award” for sorting more food than any other college or university in the state. The award recognizes the group’s work for 2005, since tabulations aren’t completed until each higher education institution participates and gets the food weighed on the scales.


“It’s the chapter’s way of giving back to the community,” said Kristal Cardone, assistant director of Alumni Relations who rolls up her sleeves for the annual event. “This year’s event was coordinated by Mary-Lyn Siderski, URI chapter leader; Kristen French, volunteer and community events manager for the food bank; and Cardone. I’m guessing that URI will retain the Golden Pallet title next year.”


ALL IN THE FAMILY(L): URI ’79 alumna Betsy McCabe of Barrington and her daughter Kate McCabe ’02 of East Greenwich help out the Rhode Island Community Food Bank. URI photo by Nora Lewis.