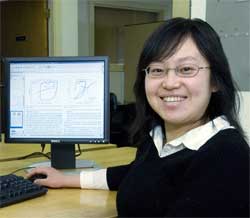 
KINGSTON, R.I. – February 19, 2007 – People often decide whether to trust another individual based on past experiences and their personal relationships with others. But how does one know whether to trust the information coming from a computer?


That’s the challenge faced by University of Rhode Island researcher Yan Sun, an assistant professor of computer engineering, who has been awarded a $400,000, five-year grant from the National Science Foundation to develop a systematic plan to build “trust infrastructure” in computer networks.


“Trust is a driving force in society, and it makes us more efficient,” explained Sun. “Low levels of trust make us less effective and we become less productive. The same is true in computer networks. Without the proper trust relationships, network operations suffer.”


Back when supercomputers controlled most computer networks, it was easier to trust the network, according to Sun. But now that computer networks are decentralized and data transmission is collaborative, the only way of being certain that data is transmitted securely is through the use of expensive cryptography systems.


So Sun is studying trust from a social science perspective and adapting it to computer networks to improve network security and performance.


Sun is trying to establish trust values that can be quantified and calculated, as well as a framework for evaluating the trustworthiness of a network. “There’s a great deal of uncertainty when deciding to trust someone, so I’m hoping to use that uncertainty as a way of quantifying trust,” she said.


The National Science Foundation grant supporting Sun’s research was awarded through its Faculty Early Career Development Program, one of the foundation’s most prestigious awards in support of the early career development activities of those scholars who are most likely to become the academic leaders of the 21st century. She joins Scott McWilliams, David Chelidze and Frederick Vetter as the only URI faculty to have received this distinguished award in the last decade.


Sun joined the URI faculty in 2004 soon after completing her doctorate at the University of Maryland. A native of China who now lives in South Kingstown, she was hired through the National Science Foundation’s ADVANCE program, which is designed to boost the careers of women scientists and engineers.


In addition to her research, Sun has developed a new undergraduate course on information and network security, a topic she says is as important for computer engineers today as programming was 10 years ago. She also plans a series of outreach activities for students at middle and high schools, as well as at the Community College of Rhode Island, to introduce them to the topics of online privacy and network security.


Her outreach efforts are partly designed to show students that computer security is an important and interesting topic, but she also aims to encourage girls to pursue careers in computer engineering.


“I want girls to see that it’s a fun discipline, and it’s not just for geeks,” Sun said. “I think girls tend to prefer more human interaction, and the image of the computer engineering discipline is that all we do is sit at the computer. But to understand the issues related to the usability of computers, we need input from women because they are probably more sensitive to those issues.”