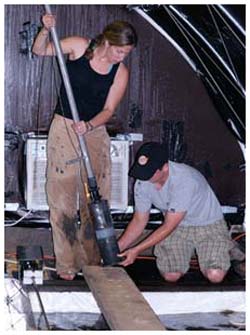 
But a new study in Narragansett Bay by researchers at the University of Rhode Island and published this week in the journal Nature has revealed a surprising reversal in the nitrogen cycle. Instead of removing nitrogen, the sediments have become a source of nitrogen through a bacterial process called nitrogen fixation.


According to URI researchers Robinson Fulweiler and Scott Nixon, chlorophyll concentrations in mid-Narragansett Bay appear to have been declining since the 1970s. This has resulted in a decrease in plankton sinking to the bottom. This is an important change because the plankton are an important food source for the benthic community and are essential for the denitrification process.


Added Nixon, “Instead of removing some of the nitrogen we put into it, in the summer of 2006 the Bay sediments brought nitrogen into the system. In fact, last summer, the Bay’s sediments added 1.5 times more nitrogen than the direct discharge of sewage.”


The URI researchers speculate that the decline in chlorophyll that led to the reversal of this important part of the Bay’s nitrogen cycle is linked to climate change and a warming of the bay.


Previous work by URI researchers has proposed two main theories to link warming surface water temperatures with lower mid-Bay chlorophyll concentrations. One theory, according to Fulweiler, suggests that warmer water allows zooplankton to graze on the phytoplankton longer, thereby reducing the quantity and/or quality of phytoplankton reaching the bottom of the Bay.


Another possible explanation, she said, is that phytoplankton blooms are triggered by the amount of sunlight in winter, and warmer winters have more cloudy days, resulting in fewer plankton blooms during the winter and spring seasons.


“We’ve heard a great deal about how climate change has affected wildlife, but this may be the first time that changes in climate have been observed to change fundamental nutrient cycles,” said Nixon. “Benthic-pelagic coupling – the relationship between the water column and the bottom – has changed dramatically in the Bay in the last 30 years. It’s a story that hasn’t been appreciated yet.”


To study the changing nutrient cycle in Narragansett Bay, Fulweiler and Nixon, along with colleagues Steve Granger and Betty Buckley, collected sediment samples from the bottom of the Bay and maintained them in nine tanks at a facility at URI’s Graduate School of Oceanography that replicated the Bay environment. To three of the tanks they added phytoplankton at quantities found in the Bay in the 1970s, while three tanks received half that amount and the remaining three tanks received no phytoplankton. Fulweiler is shown above working with a colleague in one of the labs.


Fulweiler and Nixon said their results have raised many questions for further investigation, including why chlorophyll concentrations are declining and whether other estuaries have also become nitrogen producers.

Their research was funded by grants from the National Science Foundation (through the R.I. EPSCoR Program), Rhode Island Sea Grant, the Switzer Foundation, and the Rhode Island Coastal Resources Management Council.