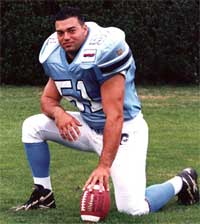 
KINGSTON, R.I. –September 11, 2007–Christian DeSimone ’00 overslept on September 11, 2001 and rushed to the train station without his lunch. His mother called his cell phone, offering to bring it to him. He told her not to trouble herself. He would pick up something later. That was their last conversation.


The 23-year-old arrived at the Marsh & McLennan offices, located on the 100th floor of Tower One of the World Trade Center where he worked as a forensic accountant. Shortly after 9 a.m. one of the hijacked planes hit the building, killing Chris and 294 of his colleagues. His remains have never been found.


“My son was kind, sweet, and very respectful. He never gave us a day of trouble,” says Christel DeSimone, noting that Chris, a linebacker for the Rams football team, handed in his uniform after his father died to concentrate on his studies and to help his mother and sister Martina at home in Ringwood, N.J.


Christel will add more than $30,000 to the Christian L. DeSimone Fund for study in German or accounting. The funds come from a memorial golf tournament held this summer, which was attended by family, colleagues, and friends.


Christel, a German native, notes that Chris was fluent in the language and studied it at the University. “My son loved URI,” says Christel. “We all did. My husband once joked that he wished he could repeat his college days, only this time he would go to URI.” Christel has visited the University several times since Chris’ death. “I like to walk around the campus. I feel a great connection.”


Spencer Martin, his accounting professor, remembers Chris. “We spent 14 days on a student bus trip visiting companies in Germany,” he says. “Chris was the leader of the group since he had been to Germany to visit family. He frequently asked me if he could help me with my bags at the hotels. He would also check on other students after a night on the town. He was a very capable, very bright, friendly, caring young man.”


People wishing to contribute to the Christian L. DeSimone Fund should contact Tom Zorabedian, senior development officer for the College of Arts and Sciences at 401-874-2853 or zman@advance.uri.edu.


Chris DeSimone was one of five members of the URI family who died on September 11, 2001. Michael McGinty, M.B.A. ’91, an insurance broker of Marsh USA, was at a meeting at the World Trade Center. Frank Schott Jr. ’83, assistant vice president for technology at Marsh & McLennan, was on the 96th floor of One World Trade Center. Lynn Edwards Angell, M.L.S. ’77 and her husband David, creator, writer, and executive producer of TV’s Wings and Frasier were flying from Cape Cod to Los Angeles for business. Christine Barbuto ’90, a buyer for the TJX Companies, was also headed to Los Angeles on business with five colleagues.