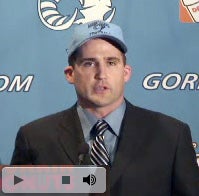 KINGSTON, R.I. — Dec. 18, 2007 — Darren Rizzi, a 1992 graduate of the University of Rhode Island, was introduced as the school’s 18th head football coach at a press conference, Tuesday afternoon, at The Ryan Center. Rizzi, who was an All-American tight end for the Rams, returns to his alma mater after spending the last six seasons coaching at Rutgers.


“We are so excited to have Darren Rizzi lead our football program,” said Thorr Bjorn, URI director of athletics. “Darren is an extremely well-respected coach, who not only possesses tremendous passion and enthusiasm for the sport of football, but even more importantly, for the University of Rhode Island. He is exactly the type of person we need to energize our football program and put us on the path of competing for a CAA Championship and beyond.”


This past season, Rizzi served as associate head coach at Rutgers, where he coached the linebackers and special teams. The Scarlet Knights finished the regular season 7-5, highlighted by a 30-27 win over No. 2 USF, and are currently preparing to play in the International Bowl against Ball State on January 6, 2008 at the Rogers Centre in Toronto, Ontario.


“This opportunity is a dream come true and I’m excited to be back at my alma mater,” said Rizzi. “Ever since I graduated from URI and joined the coaching profession, this was always an opportunity I cherished. I look forward to getting started right away and to help build URI into a championship program.”


After arriving at Rutgers in 2002 as special teams coordinator and running backs coach, Rizzi was elevated to assistant head coach just two years later. After the school appeared in consecutive bowl games, Rizzi was again promoted – this time to associate head coach, in 2006. Rutgers’ selection to the International Bowl in 2007 marks the first time it has received three consecutive bowl bids in the 138-year history of the football program.

Under his tutelage, Rizzi helped build a strong corps of linebackers at RU. In 2006, the Scarlet Knights’ defense finished fourth nationally in total defense, fifth in sacks and tackles for loss, and eighth in scoring defense.


Rizzi broke into the coaching ranks as graduate assistant at Rhode Island in 1992 – under head coach Bob Griffin – before moving on to Colgate in 1993, where he coached special teams and tight ends. In 1994, he joined the staff at New Haven as special teams coordinator/defensive line coach before moving in a similar capacity at Northeastern in 1998. In 1999, Rizzi returned to New Haven as head coach, guiding the Chargers to a 15-14 record against some of the toughest competition in Division II.


A native of Hillsdale, N.J., Rizzi was a prep standout at Bergen Catholic H.S. before arriving in Kingston. As a sophomore at URI, Rizzi led the Rams in receptions (33), yards (541), and touchdowns (four). The following year, Rizzi hauled in 53 passes for 782 yards and five touchdowns (all team highs) and earned numerous postseason accolades, including First Team All-ECAC, Associated Press All-New England Second Team, and Sports Network Second Team All-America honors. As a senior, Rizzi was named Rhode Island Player of the Year and was honored by the New Jersey Sports Writers Association at its annual banquet.


For more about Rizzi and URI Football, log onto GoRhody.com