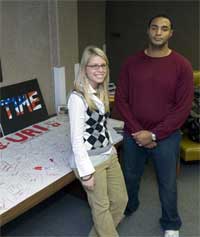 KINGSTON, R.I. – December 3, 2007 – As a nursing student at the University of Rhode Island, Bethany Larkin is learning how to help people heal. Now she is also trying to help heal the wounded African nation of Darfur. Her advocacy began after taking an emerging infectious disease colloquium at the University with professors Roger LeBrun and Howard Ginsberg. As she learned about the human rights violations and genocide, Larkin knew she had to get involved. After learning about Darfur she joined two groups that send out email blasts encouraging people to take action. From these websites, savedarfur.org and africaaction.org, Larkin got the idea of sending a banner to President George W. Bush to protest what she says is the indifference of the United States government to the suffering in Darfur.


The North Kingstown resident has asked students to “sign” the banner with red handprints that serve as a symbol of the cruelty. The handprints are the national symbol of the genocide intervention network. Larkin will be setting up the banner in the hallway in Hope Dinning Hall in early December to get more people involved.


“I feel compelled to take action with this cause since it is so urgent. It’s such a violation of human rights that something needs to be done,” said Larkin who will graduate with a B.S. in biology with honors this spring and will continue on with a second degree in nursing. “I would like people to recognize the fact that these genocides keep on happening and people’s right to live is being denied. One can really instill change by lobbying Congress and making it evident that this is a huge problem going on in the world.”


She said that it has been more than three years since the U.S. government has acknowledged the brutality in Darfur.


For the past four decades there has been civil war in Darfur, but in the past four years international groups have been fighting the repression, executions, rape, and forced relocation of Black Africans, or anyone who is non-Arab. An estimated 2 million people have been displaced, more than 234,000 forced into neighboring Chad, and an estimated 450,000 killed. In 2004 the House and Senate declared the atrocities in Darfur genocide, and the Bush Administration reached the same conclusion later that year.


Larkin’s roommate, Anthony Simmons, of Boston, M.A, created artwork that accompanies the banner. He is a senior majoring in economics and history. Simmons said, “I have always been interested in helping people and Bethany really inspired me. I knew this was a good cause and I wanted to be a part of it”.


Larkin hopes to pursue work in health abroad once she graduates from nursing where she would like to volunteer in clinics in Africa and other places in need. “I am attracted to the human element of nursing and interacting with others to help save lives.”


For further information you can contact Larkin at beth1116@aol.com.

Bethany Larkin, left, URI nursing student and her roommate Anthony Simmons, right, stand near a banner that Larkin created to raise awareness of the bloodshed in Darfur. Simmons created the accompanying artwork. URI Department of Communications and Marketing photo by Michael Salerno.