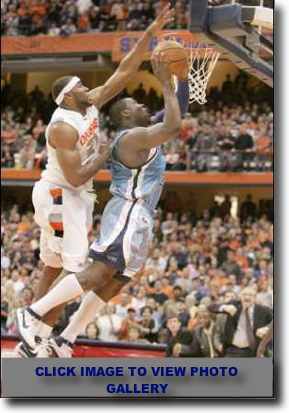 
SYRACUSE, N.Y. (AP) — Dec. 8, 2007 — Lamonte Ulmer converted a layup with 1:08 remaining to give Rhode Island the lead, and the Rams made three free throws in the final minute to hold off Syracuse 91-89 on Saturday night.


Rhode Island (10-1), which had beaten Syracuse (6-3) only once in seven previous tries, repeatedly victimized the Orange from long range, hitting 12-of-18 3 pointers, and took advantage of Syracuse’s foul trouble to win it.


Jimmy Baron led the Rams with 21 points, Parfait Bitee had 18 points and 7 assists, Will Daniels had 16 points before fouling out in the final minute, and Ulmer finished with 11 points and 11 rebounds. Joe Mbang added 12 points for the Rams, who outrebounded Syracuse 46-35, 21-12 on the offensive glass.


Syracuse, which trailed much of the first half before rallying for a 47-43 lead at the break, began the second half with a 9-2

spurt. Devendorf, playing with three fouls, fed Greene for a fast-break dunk and then hit a 3-pointer from right wing off a pass from Flynn to put the Orange up 56-45 less than two minutes into the period.


But playing man-to-man defense, Devendorf was called for his fourth foul on an inbounds pass with 16:31 left and went to the bench for 10 minutes. Greene picked up his fourth with 9:04 remaining. That left the Orange without their two top scorers, who combined for just seven points in the second half, and the Rams took advantage.


A pair of free throws by Mbang set up Ulmer’s go-ahead basket and Bitee made a pair of foul shots and Mbang made another in the final 16 seconds.


In the final minute, Flynn missed two shots, Devendorf missed another, and Harris threw up an air-ball at the buzzer.


Baron hit three 3-pointers in a span of 70 seconds to give the Rams a 20-14 lead less than five minutes into the game.


And after Syracuse came back to take a 25-24 lead on Jackson’s tip-in, the Rams scored 11 straight points. Bitee started the surge with a 3-pointer and a driving layup, Baron swished a 3 from the top of the key and Joe Mbang hit a 3 from left wing to give Rhode Island a 35-25 lead with 8:49 left.


Rhode Island made its first nine shots from long range before Baron missed two in a row.


Flynn, who had seven assists in the first half, fed Harris for a layup and Devendorf made a fast-break layup at the buzzer off a steal by Onuaku to put the Orange up 47-43 at halftime.


Read More coverage of the team’s win at PROJO.COM


Please note: URI’s Department of Communications and Marketing has posted this on behalf of the URI Athletic Department.