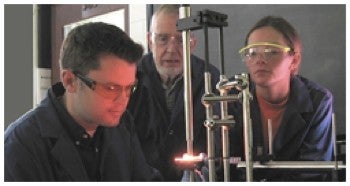 KINGSTON, R.I. – December 21, 2007 –The University of Rhode Island has established a chemistry and forensic chemistry major, the first of its kind in New England at any public university or college.


First offered during the just-completed fall semester, the 130-credit major is the only forensic chemistry program in New England rooted in a bachelor of science degree accredited by the American Chemical Society.


The nearest forensic chemistry programs are offered at Western New England College in Springfield, Mass., State University of New York at Albany and the College of New Jersey in Ewington.


URI’s program, however, should not be compared to others, according to Bill Euler, URI chemistry professor and department chair, because it is a core chemistry major first and a forensic program second. URI’s Chemistry Department also counts among its faculty world-renowned experts.


“Chemistry is key to forensic science,” said Jimmie Oxley, professor of chemistry who is respected internationally for her expertise in explosives and pyrotechnics. “A major portion of chemistry is identifying and characterizing compounds. It’s a puzzle and many of these puzzles apply to forensic chemistry.”


The Faculty Senate and the Rhode Island Board of Governors for Higher Education approved the major unanimously.


Euler said the major grew out of the URI Forensic Science Partnership, which was established in April 1999 to link the Rhode Island State Crime Laboratory at URI with academic disciplines involved in forensics at the University—chemistry, engineering, textiles, computer science and the social sciences. Work by partnership co-directors Professor Oxley, Dennis C. Hilliard, director of the Rhode Island State Crime Laboratory at the University of Rhode Island, and Everett Crisman, a professor of research in chemical engineering, led to the initial establishment of a seminar series and a forensic minor in 2000. The partnership also led to the establishment of a computer forensic minor and a graduate certificate in digital forensics by the Department of Computer Science and Statistics.


“Many of our chemistry students wanted to pursue the forensic minor, but they couldn’t because many of the core courses were in chemistry and those could not be counted toward the minor,” Euler said.


Plus, the Forensic Science Seminar series, which has brought hundreds of international, national and regional experts to the Kingston Campus each semester since the partnership’s establishment, has also sparked interest in academic forensic programs.


“Many of the speakers in the Forensic Science Partnership seminar series majored in the hard sciences such as chemistry, physics, biology, engineering and physical anthropology,” Euler said “When students asked questions about what programs they needed to enter the field, these experts said a strong background in the hard sciences is a must.”


“At the heart of a laboratory forensic scientist is chemistry,” said Hilliard, director of the crime laboratory.


Hilliard explained that “the State Crime Laboratory at the University was started by Dr. Harold Harrison, a professor of chemistry. When I am asked to advise high school students who have an interest in forensic sciences, perhaps as the result of the CSI effect, I tell them that they need a degree in chemistry, biochemistry or biology from a university of college with a solid chemistry department.“


The new program has been designed so that if students choose a path other than forensics, they will be able to pursue careers in drug synthesis, the chemical industry, the energy industry and many others.


“Even before we did any promotion or marketing of the new program, eight students enrolled for the first semester,” Euler said. “At Meet the University Days, everyone who winds up talking with us wants to discuss forensic chemistry,” Euler said.


High school students who are interested in the chemistry and forensic chemistry major at URI should take as many mathematics and chemistry courses at the highest levels possible. “Success in chemistry at the university level is highly correlated to success in math,” Euler said.