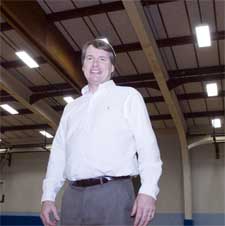 
KINGSTON, R.I. – December 12, 2007 – The University of Rhode Island has entered into an $18 million energy performance contract designed to reduce its energy usage through the replacement of lighting fixtures, windows, heating/air conditioning systems and other equipment, as well as improvements to building energy management control systems. The upgrades will save over 7 million kilowatthours of electricity and 42 million pounds of steam per year.


The cost of the two-year contract with NORESCO, one of the nation’s leading energy services companies, will be paid over 12 years from the savings on the University’s utility bills.


“Our contract with NORESCO will generate immediate energy savings without costing us any up-front capital expenditures. It’s a win-win solution for URI and the state’s taxpayers,” said J. Vernon Wyman, URI assistant vice president for business services. “In addition, it will reduce the University’s carbon footprint substantially.” 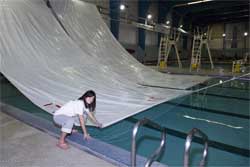 NORESCO conducted an energy audit of URI’s four campuses in 2005, which identified numerous energy savings that could be realized through the installation of improved technologies. Approval by the Rhode Island General Assembly for the unique funding mechanism was received in 2006, and Noresco began work in the Memorial Union and the four-building athletic complex in the summer of 2007.


According to Dave Lamb, the URI utilities engineer overseeing the energy contract, $1.2 million of improvements were made to lighting, lighting controls, the air conditioning system, and the energy management system in the Memorial Union. Eighty percent of the light fixtures in the building were replaced. The project is expected to reduce energy usage in the building by 500,000 kilowatthours of electricity and 5.3 million pounds of steam per year.


The athletics complex also received upgrades to lighting, lighting controls, heating/ventilation systems and major improvements to the building energy management system. In addition, all of the windows in Keaney Gymnasium are being replaced.


“It’s amazing how much brighter it is now in Keaney Gym,” said URI volleyball coach Bob Schneck, “and it’s much easier for a volleyball player to look up and into the lights. The old lights used to blind you when you had to look at them. So we no longer have any excuse for not digging every ball hit there.”


In addition, covers are being installed on the three swimming and diving pools in the Tootell Aquatic Center, which will save on heating the pools as well as reduce evaporation and chemical usage.


“The humidity and heat loss from the pools make it extremely difficult to control the environment in Tootell and provide consistent heating and cooling throughout the building,” said Jerry Sidio, URI director of facilities. “Covering the pools will reduce the humidity and temperature to levels that allow our equipment to perform efficiently, and the savings will help pay for other improvements, such as the windows at Keaney.”


Minor upgrades were made to the lighting and energy management system in the 5-year-old Ryan Center.


A total of $3.3 million in improvements are being made in the athletic complex, which will reduce energy usage by 1.6 million kilowatthours of electricity and 20 million pounds of steam while also reducing water usage by 490,000 gallons per year.


Additional installations will be completed in the 2008 fiscal year (which ends June 30, 2008) at the URI Providence and Narragansett Bay campuses, bringing the total project costs for the year to $6.1 million. An additional $12 million in improvements will be made in fiscal year 2009, and more improvements could be added to the project in future years.


The University is pursuing a number of other energy initiatives, in addition to those included in the NORESCO contract. For example, it has installed solar shingles on the roofs of two buildings – one on the Kingston campus and one on the W. Alton Jones campus – and it has committed to ensuring that all future buildings are LEED (Leadership in Energy and Environmental Design) certified as energy efficient.


With its student-run Renewable Energy Club, URI is also continuing to study the feasibility of installing a wind turbine to reduce its reliance on fossil fuels. Data collected in 2006 showed that the Kingston campus does not have the wind capacity to make such an installation economical, but a site at the Narragansett Bay campus is being evaluated in collaboration with the URI Ocean Engineering program and the Environmental Protection Agency, which has offices on adjacent property.


URI is also participating in a price response program from electric utility National Grid, which provides the University with compensation when it reduces energy demand at the request of the company during peak usage days. The University is also participating in the Forward Capacity Market, which will compensate URI when the energy capacity it no longer uses due to the Noresco contract is auctioned to other energy consumers by ISO-New England, which manages the electricity grid in the region.


The URI energy conservation effort is part of a statewide program spearheaded by the Rhode Island Office of Energy Resources and includes the installation of conservation measures at six state facilities. According to the OER Commissioner Andrew Dzykewicz, the statewide investment of $68 million will yield savings in excess of $128 million dollars. “This is a phenomenally successful program,” noted Dzykewicz. “We conserve energy, reduce capital costs and cut down on greenhouse gas emissions. It’s a rare example of a program with no downside.”