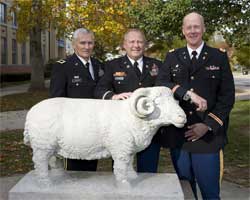 
They are: Maj. Gen. (Ret) Kenneth Quinlan of Huntsville, Ala., class of 1973; Col. (Ret) and former Assistant Secretary of Defense Thomas W. O’Connell of Alexandria, VA, class of 1968; Lt. Col. (Ret) Paul Helweg of Kingston, RI, class of 1970. The three were added to URI’s ROTC Hall of Fame during the ROTC Alumni Association’s bi-ennial induction ceremony.


The three inductees were chosen from among 29 nominees, all of whom have lengthy and distinguished records of achievement.


Gen. Quinlan, a URI graduate commissioned in 1973 as an infantry officer, has advanced steadily to the rank of major general by displaying ability and leadership. Among his many assignments, he served as an infantry company commander, as the chief of the Strategic Plans Division of the United States Pacific Command, and as deputy commanding general/ assistant commandment of the U.S. Army Aviation Center. His numerous awards include the Defense Superior Service Medal, the Legion of Merit, the Bronze Star, the Master Army Aviator Badge, and the Air Assault Badge. Quinlan retired in October 2006 as the commandant of the Joint Forces Staff College.


Quinlan has been an active supporter of the ROTC program at URI. On several occasions he has returned to URI to participate in commissioning ceremonies. He and his wife Lynn have donated generously to a program that obtains dress blues for senior cadets.


Col. O’Connell was nominated by President George W. Bush to serve as assistant secretary of defense in April 2003, and was confirmed unanimously by the U.S. Senate in July 2003. In this position he oversaw a Special Operations force of 52,000 personnel and a $9 billion dollar annual budget. O’Connell also directed the Department of Defense Counter narcotics program where he served in that position until April 2007.


A 1968 Distinguished Military Graduate, he began his career as an infantry officer in Germany. Later, he spent three years with the 82d Airborne Division in Fort Bragg, N.C., serving as an intelligence officer at the battalion, brigade and division level. From 1980 to 1983, he served as the senior intelligence officer for a U.S. Army Special Mission Unit at Fort Bragg. O’Connell attended the U.S. Naval War College, where he earned a master’s degree in international relations and graduated with Highest Distinction. He then returned to Fort Bragg and served as director of Intelligence of the Joint Special Operations Command. He completed his career with an assignment at the Central Intelligence Agency as deputy for Command Support, retiring as a colonel in 1995. O’Connell was awarded many honors, including the Purple Heart Air Medal, the Defense Superior Service Medal and three Bronze Stars.


Lt. Col. Helweg was commissioned as an ordinance officer in 1970. In 1977 Helweg served with the 443rd Civil Affairs Company in Warwick, a unit he remained with until 1988. During that time, he completed three officer career courses: ordinance, chemical and civil affairs. Promoted to Lieutenant Colonel in 1992, Helweg was assigned to the 98th Regiment, 98th Division, as instructor/trainer for the Command and Staff Services School and Command and General Staff College, a post he held until his 1998 retirement.


In 1999 Helweg became active with the URI Army ROTC Chapter. He was elected president of the chapter in 2001, and held that position for the next six years. During his time as chapter president, several milestones were reached by the chapter. For example, Helweg established the Army ROTC Fund for Military Excellence within the URI Foundation and created the URI Army ROTC Alumni Chapter Newsletter.


Eligibility for membership in the URI ROTC Hall of Fame is open to alumni of the program, former and present cadre, and friends of the University’s ROTC program. The next selection will be in the fall of 2009. Any person wishing to nominate a candidate for the next selection should contact John Breguet, 146 Stillwater Road, Smithfield, R.I., 02917, telephone (401) 232-2097, e-mail jbreguet@cox.net. A nomination should include the name of the nominee, present address and telephone number if applicable, connection to URI ROTC program, and as full a description as possible of the career of the individual. In addition to your own name, address, e-mail if applicable, and telephone, please include such items as the nominees’ year of graduation, awards received, assignments, rank, etc.