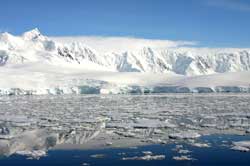 KINGSTON, R.I. – February 15, 2008 — It has been 40 million years since the waters around Antarctica have been warm enough to sustain populations of sharks and most fish, but they may return this century due to the effects of global warming. If they do, the impact on Antarctic ecology could be serious, according to researchers from the University of Rhode Island.


URI biology professors Cheryl Wilga and Brad Seibel analyzed the physiological adaptations and metabolism of sharks and other warm-water predators and concluded that an increase of just a few degrees Celsius could make Antarctic waters hospitable to some species.


Their study, “None Like It Cold: Physiological Constraints on Predators in Antarctica,” was presented today in Boston at the annual meeting of the American Association for the Advancement of Science.


“There are few prey-crushing predators in Antarctic waters. As a result, the Antarctic seafloor has been dominated by relatively soft-bodied, slow-moving invertebrates, just as in ancient oceans prior to the evolution of shell-crushing predators.” said Wilga.


She also noted that ocean-going sharks have a high metabolism rate because they must swim constantly to aerate their gills, and they use a great deal of energy just to keep moving. The cold waters around Antarctica may slow their metabolism too much for them to survive.


Benthic sharks — those that live on the seafloor and swim very little – have a lower metabolism rate and can survive in water 7 to 10 degrees Celsius, but almost all benthic sharks currently are found in shallow temperate to tropical waters. Since they cannot swim great distances and do not produce a larval stage capable of wide dispersal, it is unlikely they could easily get to Antarctica on their own.


According to Seibel, sharks accumulate trimethylamine oxide (TMAO) as part of their normal body functions, and their body’s demand for it is even greater at cold temperatures and at high pressures, like are found in deep trenches around Antarctica. “It may be that the required levels of TMAO reach an upper limit that excludes sharks from entering Antarctic waters,” he said. “Interestingly, sharks are not found in the Antarctic or globally at depths below about 3,000 meters either.”


The waters around the Antarctic Peninsula remain within a few degrees of freezing year round, but in the last 50 years the temperature there has increased by 1 to 2 C, which is about double or triple the global average.


“The water only needs to remain above freezing year round for it to become habitable to some sharks, and at the rate we’re going, that could happen this century,” Wilga said. “Once they get there, it will completely change the ecology of the Antarctic benthic community.”


While they don’t believe that the arrival of sharks and shell-crushing bony fishes in Antarctica will lead to widespread species extinctions, Wilga and Seibel say that it will certainly lead to dramatic changes in the population numbers and proportions of species found there. Shrimp, ribbon worms and brittle stars will likely be the most vulnerable to population declines.


“Ice fishes – the only bony fish that now lives in Antarctic waters, because it has antifreeze in its system – will face a new threat as well,” Wilga added. “They are already preyed upon by seals and penguins. Adding sharks and other bony fishes to the mix will likely have a big affect on them.”


Crabs, another predator that has been absent from Antarctic waters for millions of years, are also likely to make a comeback. The cold Antarctic water reduces their ability to flush magnesium from their blood, leading to magnesium narcosis and death. But the warming sea temperatures around Antarctica have already led some predatory crabs to move closer and closer to the Antarctic shelf environment.