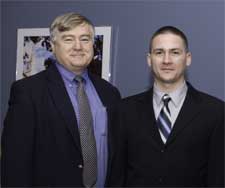 KINGSTON, R.I. – November 26, 2008 – After six years of working 80 to 100 hours per week running the radio room aboard a U.S. Navy submarine, Alex Page said that the time commitment required to earn good grades in college is easy.


“I put in a lot of time on my studies compared to other students,” said the University of Rhode Island sophomore from Lyman, Maine, “but it doesn’t feel like a lot of time to me.”


This fall, Page’s work ethic and subsequent academic success led him to be named a University College Scholar as one of the top 10 students in his class at URI. What made his achievement even greater is that he earned top grades while majoring in four challenging disciplines – computer engineering, electrical engineering, physics and mathematics.


“I came to URI to be close to the Navy contractors and the Navy bases in Rhode Island and Connecticut so I could get internships and part-time jobs,” Page explained. “I knew I wanted to study computer engineering, but then I saw that electrical engineering is a more diverse degree and it wouldn’t require a lot more classes, so that became my double major. Then I started doing well in physics and math, and they applied to my work in engineering, so I added them, too.”


Like many students of his generation, Page grew up with a great interest in computers.


“I was the right age to see a lot of major advances in computer technology,” he said. “But I maxed out on the ‘using’ part of computers, and now I want to see how these things actually work.”


His success at URI came somewhat unexpectedly, considering his experience in school during his teenage years.


“In high school I didn’t have a lot of interest in what they were making us do,” Page said. “I was a very technical person and the required courses emphasized things I didn’t care much about, so I just did what I needed to do to pass.”


While he cannot talk much about his Navy experience and admits that he didn’t enjoy most aspects of his military job, he said that it helped him to define his long-term goal.


“I want to get involved in some sort of physics research project using my engineering skills,” Page said. “It would be great to work on something like the Large Hadron Collider in Europe or on the space program, projects where there is a lot of collaboration among governments and research institutions. We need to be exploring and learning more than we are.”


Page’s four academic majors would leave most students with little time left to do anything else, but he has immersed himself in a variety of extracurricular and community service activities as well. He participates in the URI Robotics Club, which helps local high school students build robots for competitions, and he is involved with Providing Assistance to Veterans and Supporters, a student group that helps veterans transition back to school.


“PAVS is an important group not only for the incoming students trying to sort through their Veterans Administration paperwork, but for URI itself to be able to say that it’s a ‘veteran-friendly’ school, which may help it increase enrollment,” he said.


Page also provides technical support to several URI departments, and he serves in the Navy Reserves in a construction unit.


“Last year my unit helped raise the Russian submarine in Providence that had sunk while being used as a museum,” he said. “I was mostly just helping to plug leaks, but I was the only one there with submarine experience – it was mostly divers and Army guys doing the work – so I was able to help with some of the decision making.”


Although Page still has five more semesters left at URI before earning his bachelor’s degree, he is already looking forward to his next step – graduate school.


“I love being in school so far,” he said. “I’m realizing that I can do a lot more than I imagined, so I want to keep on learning for as long as I can afford to.”