Skip to content
KINGSTON, R.I. – November 28, 2008 – Budget cuts and large class sizes don’t necessarily lead to an inferior educational experience. In fact, at the University of Rhode Island, students in large classes often find the experience to be as positive as smaller classes, thanks to personal touches, hands-on activities, innovative technologies, and the engaging teaching styles of its award-winning professors.


“It used to be that faculty in large classes had to be the sage on the stage, but now we’re more like the guide on the side,” said Thomas Husband, a URI professor of natural resources science and the winner of a 2008 award for teaching excellence from the National Association of State Land Grant Universities and Colleges. “There used to be a great temptation to just stand up in front of the students and lecture, but now we do a wide range of other things to keep those students engaged.”


In Husband’s Natural Resource Conservation course, which typically enrolls about 140 freshmen per semester, he assigns one-minute papers that students write on index cards during class time, and he conducts five-minute mini-debates on environmental controversies.


“I make sure that all of the students argue both sides of the issue to force them to consider opposing points of view,” he said. “We’ll have 60 or 70 debates going on all at once, so it gets pretty loud in class, but it’s a useful way to get everyone to participate.”


Husband also uses problem-based learning exercises designed to get students to work in groups on a contemporary problem, from thermodynamics to population modeling and wildlife management. He said that these exercises are much more labor-intensive for him than lecturing, but his students learn much more, too.


“The objective is to engage the students more in their own learning and make them more responsible for their education,” he said. “It shifts the teacher from being an entertainer to being a guide in an exchange of ideas.”


“Dr. Husband’s class was one of the largest lecture classes that I ever took, but it was also one of the most engaging,” said Rob Swanson, a URI senior. “The problem- based learning projects really brought us out of our learning comfort zones and forced us to think for ourselves. They made us use basic concepts of science in a way that I never had to do before, bringing together knowledge from all different fields.”


Husband and other URI professors also occasionally use an electronic system that allows students to provide immediate feedback on issues being discussed. Students use handheld clickers to respond to opinion polls, pre- and post-tests, and a wide range of discussion questions. Their answers are immediately turned into graphs projected onto a screen for everyone to see.


“It’s another way of engaging students in their own learning,” Husband said, “and it is often surprising to the students when most of them get the wrong answer. It becomes a teachable moment. It also makes for a safe environment where students are encouraged to express themselves in a non-threatening way. There is a level of remoteness and anonymity that students feel in large classes, and this technology makes that experience more personal.” 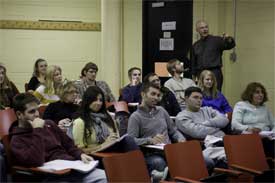 URI Entomology Professor Roger LeBrun agrees that one key to effectively teaching large classes is to personalize the experience. He invites students to the front of the class to tell how a personal experience relates to the coursework, something he calls “the anecdotal approach.”


He also emphasizes the importance of knowing the names of every student. “Knowing each of their names is magic,” LeBrun said, “because that’s when you know them as an individual. And the bigger the class, the bigger the impression it makes on the students.”


LeBrun has won teaching awards from the Carnegie Foundation for the Advancement of Teaching, the Entomological Society of America, the National Association of State Land Grant Universities and Colleges, and the state of Rhode Island, among others.


He faces a number of unique teaching challenges due to his subject matter — insects. His introductory entomology class enrolls 60 students, while 100 students sign up for his course on Humans, Insects and Disease each semester.


“I deal with things that are one-quarter inch or less in size,” he said, “so I need great audio-visuals to make my points. I end up blowing up insect photos to the size of a rhino to compare heads and legs.”


Because he is competing with Hollywood movies, iPods, cell phones and video games for students’ attention, LeBrun makes a point of incorporating high quality imagery and film clips into his classroom presentations. Yet the more technology he uses, the more he worries about maintaining one-to-one contact with his students.


“It’s easy to let technology replace the personal touch, but it’s the personal touch that really makes a connection with students,” he said. “Technology should enhance the facilitator, not replace him. Finding that line is a fine art.”


Despite the challenges, LeBrun always receives the highest possible ratings in his student evaluations.


“The best part of the class was Dr. LeBrun’s interaction with the students,” said URI senior Kristen Lahteine-Stepalavich. “He constantly posed questions to engage individuals, and he asked for personal stories of encounters with specific insects or diseases. By actively incorporating the student experience, Dr. LeBrun initiates a dialog within the class.”


“The key,“ said LeBrun, “is to make that class as small as possible, in spite of the number of students enrolled. It takes a lot of energy, but it’s absolutely worth it.”