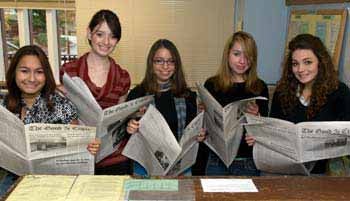 URI student newspaper led by all females for first time


KINGSTON, R.I. – November 6, 2008 – At first glance, they look like typical college newspaper staffers. There is a clear camaraderie, as little more than brief eye contact and a smile is needed to trigger the memory of getting an edition of The Good 5-Cent Cigar to the press under less than ideal conditions.


All five have been with the University of Rhode Island school newspaper for at least two full years. For them, the Cigar headquarters in the Memorial Union serve more as a home than as an office.


What makes this group so unique? For the first time since its founding in February of 1971, the Cigar is run by an entirely female staff. When that fact is brought up, the women all smile with a modest sense of pride. Yet, they also are quick to point out that its estrogen-laden leadership does not define the newspaper.


“We’ve thought about it, but not much,” said Editor-in-Chief Brenna McCabe of Portsmouth. “We are more concerned about getting the paper out.”


Thompson, of Lunenburg, Mass., has a double major in journalism and women’s studies. She said several of her professors picked up on the makeup of the staff.


“I’ve definitely heard a lot about it,” said Thompson, a senior. “I’ve been asked, ‘How is this going to change the face of the newspaper?’”

Lindsay Lorenz, also a managing editor, was quick to respond.


“ It’s still a good, quality newspaper,” said Lorenz, a junior from Harrisburg, Pa. “We just happen to be the people editing and writing for it.”

Linda Levin, chair of the URI Journalism Department, said more and more women have been entering the field in recent years.


“It is mirroring what is going on in professional newspapers,” Levin said. “Many, many of the top editors are women. It took a little while, but we are seeing more and more women move to top positions with newspapers.”


According to Levin, the trend began in part because base salaries in the newspaper field were lower. As males sought other career options, opportunities opened up for women in the field.


The Cigar has often had women in several top positions across the board, with sports being the exception. This year, Panu heads a staff of five for the sports pages.


There are some differences the women have noticed. They feel a stronger sense of teamwork in the office, which has made this year even more enjoyable.


I think it’s a different dynamic with all women running it,” Thompson said. “Sometimes the competition among men can ruffle feathers. I don’t think we really have that here, as opposed to previous years.”


Cudworth, a junior from Providence, agreed.


“We all work together really well and feed off each other,” said Cudworth, a writing and rhetoric major. “It’s just a really good environment.”


As they continue putting out the Cigar, the women are keeping a close watch on the professional newspaper market, which has suffered greatly in recent years. Though major newspapers across the country are downsizing and slashing budgets, the women are maintaining a positive outlook as they inch closer to the job market.


“That is pretty much all we think about, at least the seniors, and the juniors, too,” McCabe said. “No matter what happens, people are always going to need the news, whether that is on the Web or on paper. We are glad to provide a service to the student body.”

While the future of the newspaper field holds many questions, Levin pointed out that the need for information will always exist, and individuals with talent for communicating information are still in demand.


“The women at the Cigar are all very bright,” Levin said. “They are good leaders, and that is what stands out most about them.”

On campus, the school newspaper still has strong readership, evidenced by the piles of Cigars that dwindle quickly each morning in the dining halls and academic buildings.


“It’s nice to see people still read the newspaper, since I now know what it takes to put a newspaper out,” said Panu, a senior journalism/English major from Blackstone, Mass., who also worked as a production manager when she first joined the staff. “I now know the layout and the late nights and being here until five in the morning, so it’s nice to see people all around campus reading the newspaper and talking about different stories.”


In the end, their ability to reach the campus population and serve as a source of information is what makes the women of the Cigar most proud.


“I think we all feel like we have deep roots at the paper, and that we have contributed to making it change for the better,” McCabe said. “The foundation of the paper is going to be very strong when we all leave.”