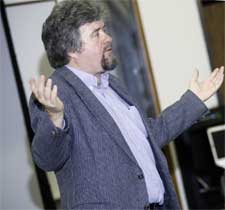 
Nike’s response, according to a University of Rhode Island professor was, “We feel very badly about this, but these people don’t actually work for us because Nike doesn’t produce anything. Nike is a marketing company.”


URI Economics Professor Richard McIntyre said the response by officials at a Rhode Island shellfish processing plant was similar in 2001 when a woman who worked there was killed when a van transporting workers flipped over. When workers complained about conditions at the Town Dock plant, they were fired. But officials said the workers were not company employees. Rather, they were employed by a temporary help agency that placed the workers at Town Dock. Officials said they simply lost their jobs when Town Dock hired a new temporary employment agency.


These are among the cases that inspired McIntyre, a 1979 graduate of URI who also directs of the University’s Honors Program, to write, Are Worker Rights Human Rights?, a 220-page book that examines labor standards in the global economy.


“I argue that a prime and imminent tendency in the contemporary world economy is the lengthening of commodity chains through which the ultimate employer is able to wash his hands of moral responsibility for the conditions of work,” McIntyre says in the preface of his book, published this year by The University of Michigan Press. “This is true in globalized production networks, such as those operated by Nike and other global manufacturers, as well as in temporary and subcontracted work situations in the United States and elsewhere.”


McIntyre said as he looked further into several cases, he began to see a pattern in all of them, whether it was “off-shoring of jobs, privatization, outsourcing of jobs,” in each case there was a conscious attempt to create social distance or what he calls “moral distance” between the real employer and the real employee. 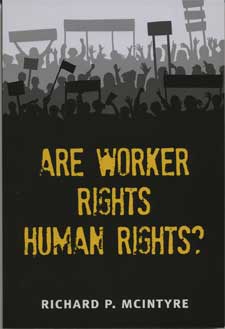 But does the South Kingstown resident’s book answer the question on the cover?


What he began to see in the debate over globalization was that pro-globalization people would say that lengthy, international supply chains that result in loose controls on manufacturing and employment are inevitable and must be accepted. “The opponents on the labor side would say, ‘No this is a violation of human rights’ and that’s the end of that conversation. You had two conversation-enders on either side,” McIntyre said.


He said the organization has identified what it calls fundamental rights at work, which it argues should be applicable everywhere. The four rights are: freedom from discrimination at work, freedom from child labor, freedom from forced labor, and freedom of association and to bargain collectively. The United States has ratified only two of the eight ILO conventions dealing with the four fundamental rights.


“Once you get your hands around the fact that rights are created, the question is why some things are rights and not others,” McIntyre asked. “The ILO wanted to identify as rights claims that had been codified by many countries. I then looked at the content of corporate codes of conduct, and they often talk about, ‘we don’t discriminate, we don’t employ child labor, we don’t employ forced labor,’ but they don’t talk about free association or collective bargaining.”


McIntyre said the standard on free association and collective bargaining is critical because it gives workers themselves the opportunity to improve things for themselves. “The others are in a sense kind of patriarchal. We’re going to be nicer to the poor people, but we don’t want to give them any power,” McIntyre said.


McIntyre looks at labor-based, non-governmental organizations as central to improving the plight of workers.


“In Mexico and Central America, a lot of progress was made in the early part of the decade in building networks, relationships and winning contracts, but in the last three years, there has been a giant sucking sound toward China. Mexico, Central America and the Caribbean are struggling because they are being under-priced by cheap Chinese labor.


“What happens in China right now is the key to what happens going forward,” McIntyre continued. “China is the low cost producer, and until conditions get better there, which requires people in China to become organized, there is going to be downward pressure for everybody, not only in the U.S., but places like Mexico. In Mexico, the average wage is $1.00 an hour, which sounds cheap to us, but not relative to 50 cents an hour to 65 cents an hour in China.”