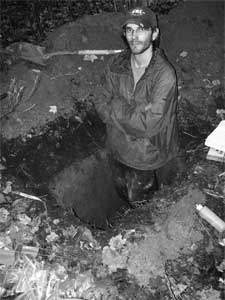 
The University of Rhode Island graduate student, one of 9,500 scientists attending the joint meeting of the Soil Science Society of America and the Geological Society of America in Houston, has developed a new method for dating soil deposition, which is an important step in quantifying how much carbon is sequestered in floodplain soils.


“Land use has an effect on soil quality and soil functions, so I’m looking at layers of pollen deposited in floodplain soils to help me determine the shifts in land use over the past 300 years,” Ricker said.


Land use patterns in southern New England are well established, according to Ricker, and they can be clearly identified using pollen layers in the soil. Regional deforestation for agriculture in the 1700s and early 1800s led to the rapid growth of pollen-producing weeds, and that pollen was deposited in the riparian zones by wind, air, and floods. Farmland was abandoned in the late 1800s as people moved to the cities during the Industrial Revolution, so less weed pollen was deposited in the soil.


“My poster generated a great deal of interest because similar pollen studies in riparian zones hadn’t been done before,” Ricker said. “Most people who look at pollen are usually studying lakes or bogs, and they’re primarily interested in learning about paleoclimate.”


Ricker became interested in soil science as an undergraduate student studying geology at the University of Mary Washington in Virginia. After working as an environmental consultant in Washington, D.C., for two years, he enrolled at URI to study under Professor Mark Stolt and participate in his riparian zone soil research.


The field work Ricker recently completed consisted of digging soil pits two to four feet deep at 18 sites around southern New England, taking soil samples at various levels, and describing the structure of the soil. He will be conducting laboratory analysis of his samples for the next several months before completing his master’s degree next fall.


He hopes to eventually earn a doctoral degree as well, but he will probably also return to the consulting field.

“Soil scientists are in demand as wetland consultants,” he said, “because we have skills that few other people have. And I really enjoy it.”