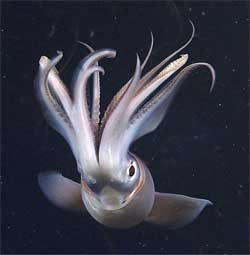 KINGSTON, R.I. – December 16, 2008 – The elevated carbon dioxide levels expected to be found in the world’s oceans by 2100 will likely lead to physiological impairments of jumbo (or Humboldt) squid, according to research by two University of Rhode Island scientists.


The results of a study by Brad Seibel, URI assistant professor of biological sciences, and Rui Rosa, a former URI post-doctoral student now on the faculty at the University of Lisbon, Portugal, is reported in this week’s issue of the Proceedings of the National Academy of Sciences.


The researchers subjected the squids (Dosidicus gigas) to elevated concentrations of CO2 equivalent to those likely to be found in the oceans in 100 years due to anthropogenic emissions. They found that the squid’s routine oxygen consumption rate was reduced under these conditions, and their activity levels declined, presumably enough to have an effect on their feeding behavior.


Jumbo squid are an important predator in the eastern Pacific Ocean, and they are a large component of the diet of marine mammals, seabirds and fish.


According to Seibel, jumbo squid migrate between warm surface waters at night where CO2 levels are increasing and deeper waters during the daytime where oxygen levels are extremely low.


“Squids suppress their metabolism during their daytime foray into hypoxia, but they recover in well-oxygenated surface waters at night,” he said. “If this low oxygen layer expands into shallower waters, the squids will be forced to retreat to even shallower depths to recover. However, warming temperatures and increasing CO2 levels may prevent this. The band of habitable depths during the night may become too narrow.”


Carbon dioxide enters the ocean via passive diffusion from the atmosphere in a process called ocean acidification. This phenomenon has received considerable attention in recent years for its effects on calcifying organisms, such as corals and shelled mollusks, but the study by Seibel and Rosa is one of the first to show a direct physiological effect in a non-calcifying species.


The scientists speculate that the squids may eventually migrate to more northern climes where lower temperatures would reduce oxygen demand and relieve them from CO2 and oxygen stress. While it is possible, they say, that the squids could adjust their physiology over time to accommodate the changing environment, jumbo squids have among the highest oxygen demands of any animal on the planet and are thus fairly constrained in how they can respond.


“We believe it is the blood that is sensitive to high CO2 and low pH,” Seibel said. “This sensitivity allows the squids to off-load oxygen more effectively to muscle tissues, but would prevent the squid from acquiring oxygen across the gills from seawater that is high in CO2.”


While many other squid and octopus species have oxygen transport systems that are equally sensitive to pH, few have such high oxygen demand coupled with large body size and low environmental oxygen. Therefore the scientists believe that their study results should not be extrapolated to other marine animals.


Above Image provided by the Monterey Bay Aquarium Research Institution.

Read about this in

Link to other news reports of this through Google News.