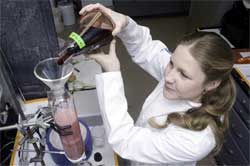 KINGSTON, R.I.–December 1, 2008 — A University of Rhode Island undergraduate majoring in chemistry hopes to unveil the secrets of the garden in her search for natural treatments for such killers as breast cancer.


Caroline Killian worked this summer in a laboratory mashing up berries and doing extensive tests to find the degree of anti-cancer activity that the Eugenia jambolana berry produced. Also known as the Jamun, the berry is a vibrant purple color, native to India, and found in the United States in Hawaii, Florida and Texas. It is traditionally used as a pre-insulin treatment for diabetes but Killian dared to question what kind of healing power it has against cancer?


Her work as a Summer Undergraduate Research Fellow continues with URI Pharmacy Professor Navindra Seeram. Killian and Seeram have been examining the anti-cancer properties of the Jamun berry.


As a summer research fellow, Killian was one of 80 students from URI and seven other Rhode Island colleges who participated in a program funded by federal grants awarded to the URI College of Pharmacy and the College of the Environment and Life Sciences.


Killian and Seeram tested extracts of the berry on two breast cancer cell lines. The first was the most common type of breast cancer and the second is a form called “triple negative.” The triple negative cell line is clinically characterized as more aggressive. It responds well to typical treatments such as chemotherapy but is more likely to recur.


In collaboration with Lynn Adams, breast cancer researcher at City of Hope Hospital in California, Killian was able to test the effects of the Jamun berry on the growth of these breast cancer cells in cell cultures. They found what they were looking for- that these berries had a strong positive effect on both of the cancer cell lines.


“So great, cool, these berries may help prevent cancer. But here’s the really exciting part,” said Killian a resident of Peace Dale, who also has strong ties to Little Compton and Riverside. “This berry inhibits cell growth of a particularly aggressive type of breast tumor, for which there is limited therapy.”


Therefore, the Jamun berry had a positive effect on the growth of the “triple negative” cancer cell line. “Triple negative cell lines have none of the typical target receptors, so there is great need out there for a treatment modality for this type of breast cancer.”


But what is it that is so special about these berries? In mashing up the berries, Killian and Seeram were able to extract the berries’ finest elements. It was found that the pigments of the berries inhibit cancer cell proliferation, which is important for cancer treatment. To put it simply, it is the passionate purple color of this berry that allows it to do the healing.


“The fact that violet has the shortest wavelengths of all the colors in the visible spectrum (around 400 nm) means that it oscillates the fastest, and has the most energy of all the colors we can see. Purple is traditionally the color reserved for royalty; in Ancient Greece, the plants used to make purple dyes were very scarce and, hence, very valuable,” said Killian, who earned her first bachelor’s degree from St. John’s College in New Mexico. “One Greek island, Kythera, was violently raided for its purple flowers on more than one occasion,” said Killian. “There is something to this. It’s easy to see why purple berries might be so effective at attracting pollinators.“


The project has been deeply rewarding for Killian. “As a student of science, I find ideas powerful in the sense that I can ask big questions, and answer them, too. What can we do to prevent and cure cancer? Using non-toxic, naturally occurring plant compounds, already present in our diet, to develop targeted treatments that show specific action on preventing and halting tumor growth is very exciting. Our school’s motto is ‘Think big, we do.’ Since coming on board at the Seeram lab and getting involved in science, mine has become ‘Think big, AND do’.”


Killian has surely done big things and will continue by presenting her project at the 3rd annual Biology New England South Meeting at Roger Williams University on Dec. 2nd.


“Caroline’s curiosity, motivation, and perseverance are key characteristics of a research scientist and it is a great privilege to mentor students like her at URI,” said Seeram.


Killian’s inquisitive nature leads her to ask what comes next. “Seeing how naturally occurring compounds found in berries and other plant foods can have such a positive effect on health is very interesting,” Killian said. She hopes it will lead to the development of natural therapies that are less toxic.


Her interest in the progression of natural forms of healing brought about this opportunity to work with Seeram. While walking through the greenhouse behind Fogarty Hall she was fascinated by some of the plants. Peter Morgan, URI senior gardener in the greenhouse, soon introduced her to Seeram and they began talking about the project. “Working with Dr. Seeram is a blast,” Killian said. “He has given me free range to explore. He fosters independence, while still provoking thoughts, actions and questions.”