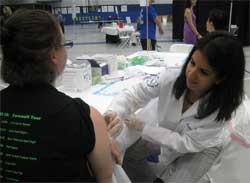 KINGSTON R.I. – October 14, 2009 – If the University of Rhode Island ever wanted to provide students training to become among the state’s first pharmacy immunizers with an experience in a demanding and sometimes confusing environment, it could not have picked a better time than now.


Thanks to a collaboration involving URI’s College of Pharmacy and the Wellness Company, five URI students helped vaccinate Roger Williams University students, faculty and staff last month against seasonal flu. Part of Roger Williams “Point of Vaccination Day,” the event was held as people across the country are being given a crash course on H1N1 influenza and how it differs from seasonal flu.


But long before any of these students prepared a syringe for a real patient, they had to complete training held last January. In total 25 URI pharmacy students were trained as certified immunizers by the American Pharmacists Association (APhA) right on URI’s Kingston campus. This fall five of them were able to put their training into action, as there was a call for help with statewide clinics. The College of Pharmacy is involved with various state disaster and preparedness committees, which led to this opportunity for URI pharmacy students.


“I really saw a difference in their confidence interviewing patients, drawing up and administering vaccine. “ said Jef Bratberg, professor and coordinator of the event for the URI College of pharmacy. “ They performed well in an unfamiliar environment, which is the ultimate goal of our emergency preparedness exercises.”


When our URI students Christopher Federico of Attleboro, Mass., Molly MacDonnell of Newport, R.I., Nicole Nazy of Long Branch, N.J., Elizabeth Ragsdale of Newton, N.J., and Rayon Seng of Providence, R.I., showed up to Roger Williams University they were first immunized by the Wellness Company nurses, then administered vaccines to students, faculty and staff.


“Many people at this vaccination day were surprised to see that they would be receiving their flu shot from a pharmacy student this year, as opposed to a nurse. But they all seemed very receptive to the idea,” MacDonnell said. “ I was excited for the opportunity.”


The Rhode Island Medical Reserve Corps received funds to train health professionals to be immunization proficient and it continues to hold trainings sessions. The reserve corps worked with the College of Pharmacy to set up a full certification session on Nov. 11 for reserve corps pharmacists, pharmacists who wish to join the group, and pharmacy students, who are also required to join the corps to be volunteers. It will be a 20-hour extensive, statewide immunization training session for 50 participants, mostly URI students and some professionals.


The training involves a comprehensive program covering everything from analyzing vaccine, other drugs, and the storage of vaccines, to vaccines for emergency and bioterrorism events. The participants also administer three shots on each other as a practice and must complete two exams by the end of the training.


In June the Rhode Island general assembly passed legislation allowing pharmacist immunization within the state. The APhA worked with pharmacists on this bill for years and the association’s pharmacist training program has helped train faculty at the URI College of pharmacy.


The college has five faculty members who have been prepared to educate students and practicing pharmacists to be certified to administer vaccines. The Rhode Island board of pharmacy has formed a subcommittee to establish regulations for immunization, which went into effect by Oct. 1.


Professor Bratberg, at the College of Pharmacy says it is the college’s hope to get the immunization training incorporated into the pharmacy curriculum so all students will gain from this experience. “Our students had the opportunity to integrate their advanced clinical skills with service. These skills will be invaluable to protect citizens in the current pandemic with vaccine, as well as in any other immunization event.”