KINGSTON, R.I. – Oct. 14, 2009 – The only United States university ever to win the Collegiate Keelboat World Cup in sailing, the University of Rhode Island sailing team departs for France this Sunday in search of a second world title.


The most successful collegiate keelboat program in the country, URI is representing the country at the world championships for the 11th time since 1988. The Collegiate World Cup is held annually at different ports and venues either along the French Mediterranean or the French Atlantic seaboard. This year, URI will be among 15 international teams in Marseilles, France competing in the championships from Oct. 24-31.


“I think the idea of representing the United States won’t really set in until we are in France,” Head Coach Joey Mello said. “Right now it just feels like the University of Rhode Island is getting ready for a big regatta.”


This year’s team qualified for the World Cup by besting the field at the 2008 Kennedy Cup, hosted by the U.S. Naval Academy in Annapolis, Md. last November. 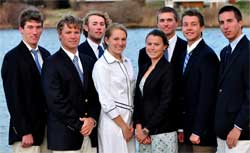 
The team will fly to France on Sunday, Oct. 18 and spend several days getting used to their surroundings. In the past, URI teams have competed in the World Cup and then spent several days in Paris, experiencing the culture.


This year’s squad eschewed the Paris experience and asked to go to France a week before the competition in order to train on the waters there, thus getting a better sense of their surroundings.


“You see all different kinds of students come through the sailing club,” Head Coach Joey Mello said. “This particular group simply loves competition. They thrive on it, and not in a cutthroat way. This team loves to sail. You see the passion when they are out on the water.”


While the World Cup is the ultimate goal, the competition only tells part of the story. As a club sport program, the sailing team had to do its own fundraising in order to pay for the trip to the World Cup. There was a $40,000 expense involved with sending the team to France, and the team members have raised the money with support from several avenues.


Assistant Athletics Director for Facility Management and Planning Art Tuveson spearheaded the effort to raise money for the trip. The team received a $5,000 grant, as well as a $6,000 loan to cover the boat deposit for the race from the URI Student Senate. Provided there is no damage to the boat, the $6,000 will go back to the Student Senate once the team returns from the race.


To raise the other money, team members worked with the URI Foundation, which organized several events over the last year. Mello credited the work of URI Foundation President Glen Kerkian, and staff members Joy Lewis and Sharon Pavignano in particular for their support.


It is not just familiar faces helping out. URI French Professor Alain-Philipe Durand – one of 15 finalists for the National Society of Collegiate Scholars’ Inspire Integrity Award in 2008 – donated more than $650 to the fundraising efforts.


Durand had no previous relationship with the sailing team, but his interest piqued when he learned that URI would be competing at the World Cup in his hometown of Marseille, France.


“Everyone on the team was so excited to hear about that,” Mello said of Durand’s donation. “When you realize that people outside of your circle are taking notice of what you are doing, all of a sudden it magnifies everything a little more. We are representing a whole lot more than just our team. That makes it more exciting.”


The news of Durand’s generosity spread, and Winifred Brownell, dean of the College of Arts and Sciences followed suit with a $500 donation to the sailing club in honor of Durand and his colleagues in French and Francophile Studies.


“Club sports are a big part of the educational experience for students,” Tuveson said. “To see the support that is coming from so many different places is just incredible.”


In addition to the financial support, many URI sailing alums have given their time to work directly with the team in recent weeks.


Through a connection with former URI sailor Scott Norris, the team was able to borrow a Farr30 vessel from Connecticut-based sailor Nelson Stevenson. The Farr30 is the closest American vessel to the Grand Surprise boats that will be used in France for the World Cup.


The URI sailors have been practicing on Stevenson’s boat on the waters just off Ft. Adams in Newport several days a week for the last month. During those practices, team members have received volunteer coaching from former World Cup team members Tom Burnham, Peter Colby, Brandon Flack, Heather Johnson, Geoff Ewenson, Russ Miller, Ben Quatromoni and Norris, among others.


“There is a huge connection to the sailing program for our alumni,” Mello said. “The people who spent their college years here don’t forget where they came from. They get excited about the legacy. They know where they came from, and they are proud of it.”