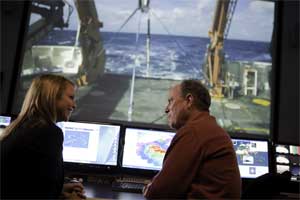 KINGSTON, R.I. – November 24, 2009 — The top-rated CBS news program “60 Minutes” will air a profile of University of Rhode Island Oceanography Professor Robert Ballard on Sunday, Nov. 29 at 7 p.m. In the program, Ballard discusses his discovery of the Titanic and other modern and ancient shipwrecks, as well as how the University’s newly opened Inner Space Center will revolutionize ocean exploration.


A “60 Minutes” film crew joined Ballard and a team of URI researchers and students during an expedition to the Black Sea in August to search for the remains of ancient shipwrecks. The television crew also spent a day on the Narragansett Bay Campus earlier this month interviewing Ballard as he demonstrated the usefulness of the Inner Space Center in a live video communication with the NOAA research vessel Okeanos Explorer in the Pacific Ocean.


Ballard was also featured on a National Geographic Channel program on Nov. 18 that examined his August 2009 efforts to find British and French warships sunk off the coast of Turkey during the epic World War I Battle of Gallipoli.