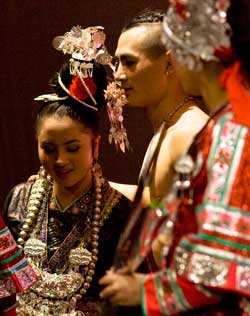 
Tickets are $10 for adults. Students with identification and children under 12 are free. Tickets can be purchased online via PayPal: confucius@uri.edu. Checks, made payable to URI Foundation with a memo to Confucius Institute, can be mailed or brought to the Confucius Institute at the University of Rhode Island, University Library, 15 Lippitt Road, Kingston, R.I. 02881. For more information, call 401-874-5746.


The Ethnic Art Ensemble of Guizhou University will dazzle the audience with performances representing ethnic life in the west of China. The ensemble has performed in Russia, Ukraine, America, South Korea, and France.


Formed in 1998, the ensemble has captured numerous prizes. For example, the Miao dance, “Water Girls,” won the gold medal of the Sixth China “Lotus Prize” for Ethnic and Folk Dancing Competition, the first prize for the Second National University Students Art Performance Competition (Specialized Group), and was invited to perform at the National Spring Festival Evening Party organized by Central Chinese Television. The dance uses “water” as a medium that technically integrates with the Miao dance.


The Miao Dance, “Silver Necklace,” won the silver medal of the Sixth China “Lotus Prize” for Ethnic and Folk Dancing Competition in 2007. The silver necklaces are decorations worn by Miao ethnic girls in Guizhou. The dance combines the necklaces with dance movements to provide a strong visual impression with the intent of showing the long life of the Miao culture.


The Miao Dance, “Dancing with the Beat of Drums”, was performed at the ceremony of 2008 Olympic Games in Beijing and at “Meet at Beijing in 2008.” Dancing to the beat of drums, the dancers wear silver decorations and form a circle and dance. The dance steps and the dancers’ posture are interrelated again and again with the leisurely and measured dance.


When the dance reaches its zenith, a female solo, “Song of Celebration,” begins, reflecting the Miao people’s enthusiastic spirit for development and progress.


For campus parking map, go to: