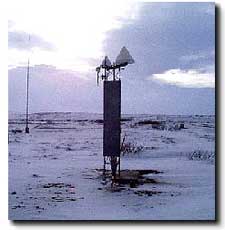 
KINGSTON, R.I. – December 16, 2010 – Commercial global positioning systems (GPS) like those dispensing driving directions in cars can provide reliable location information to within 20 feet, while an augmented system used primarily by the Coast Guard for navigation is even more accurate.


Now a University of Rhode Island engineering researcher says that the augmented system, called Differential GPS or DGPS, can also be used to concurrently transmit emergency messages or other relevant data for use by Homeland Security or other government agencies.


“The DGPS system has significant capability for use beyond that of its current mandate,” said Peter Swaszek, URI professor of electrical engineering, whose paper co-authored with Coast Guard researchers Richard Hartnett and Keith Gross won the top award at a Homeland Security conference in November sponsored by the Institute of Electrical and Electronics Engineers. “We believe that simultaneous transmission of the current navigation correction information and additional messaging could be accomplished at very minimal cost and with minimal impact on current users.”


There are 88 DGPS towers located around the continental United States that improve the accuracy and integrity of the satellite-based GPS system. Swaszek said that the Coast Guard has been using and testing the augmented system since the 1980s because the accuracy of the commercial system isn’t precise enough for landing aircraft, docking large ships and other navigation needs. The URI researcher said that the DGPS towers are robust in the face of challenging weather conditions and could be used to send emergency messages if, for example, a hurricane knocks out television or radio signals.


“This could be a great tool for the Department of Homeland Security because it uses existing infrastructure and fills a need within the emergency communication system,” Swaszek said. “And you can transmit a maximal amount of information across this link.”


The DGPS system is not a two-way communication channel, so it could only be used to broadcast information to users, and it cannot transmit a voice signal, only text and other low data-rate applications. But Swaszek envisions a wide variety of uses. He said that anyone with the proper equipment – a baseball-sized antenna – could receive the information.


Swaszek said that his proposed expansion of the DGPS system still needs additional testing, and he is meeting with potential users to seek interest and funding for further tests, including the New York Port Authority and the Mitre Corp. He believes the system could be operational within three years.


“I am incredibly pleased that this research got recognized at the IEEE conference,” Swaszek said, “I hope that those in government will see it as a useful tool and they can give it a push to get it implemented.”