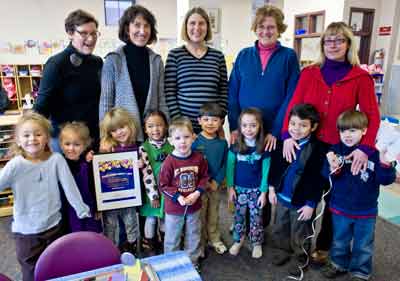 
Located on URI’s Providence campus, the Feinstein Child Development Center is one of five programs statewide to earn a five-star rating. According to the BrightStars website, the organization rated 77 childcare providers.


The BrightStars voluntary, five-level child care quality rating and improvement system was developed by a team of local early childhood and school-age care professionals and is based on national research on what constitutes quality in child care program. BrightStars is managed by the Rhode Island Association for the Education of Young Children, a non-profit organization ant the state affiliate of the National Association for the Education of Young Children.


“I am most proud of our hard-working staff,” said Deb Morelle, coordinator of the Feinstein Child Development Center. “Our teachers go above and beyond and make strong connections with the families and children.


“BrightStars acknowledged the hard work our teachers and I are doing. This lets parents know that their children are in a high-quality program.”


This level of accreditation is nothing new for the center. In 2006, it was the first program in Rhode Island – one of the first 17 programs nationally – to meet new standards set by the National Association for the Education of Young Children. 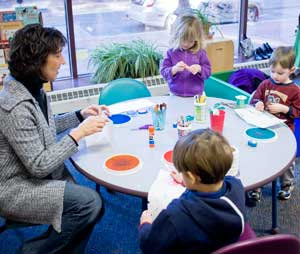 
In addition to providing the childcare, Doughty, Howard, Hall and Lamont also serve as mentors to the 75 University students who work in the center throughout the year. The students come from URI’s human development and family studies program.


“As one of the University’s laboratory schools, students enrolled in the early childhood program benefit from receiving high quality experiences at the CDC,” Morelle said. “URI students are supervised and mentored by some of the most dedicated, highly qualified teachers in the state.”


While lauding the work of the Feinstein Child Development Center, BrightStars also offered some ways to improve. By addressing some of the areas suggested, the center could earn funding from the organization. One of the limitations the center deals with is a lack of a playground.


“One of the improvements BrightStars suggested was more gross motor materials that can be used in the classroom,” Morelle said. “We’ll be talking to other centers and providers to see what materials they use and how they integrate them. We’ll do the research and make sure we find ways to get the children using their bigger muscles.”


The teachers at the Feinstein CDC often collaborate with other programs to stay up to date on best practices. Morelle welcomes field professionals to come to the center and observe how they operate.


“It is nice to hear from other programs asking for advice and feedback,” Morelle said. “The early childhood community is a small, tight-knit group, and we all want what is best for the children.”